The Mighty Rolo!!
(N.B. This ‘Last Rolo’ isn’t a romantic gesture; it will put your lover into
a diabetic coma!!)

Before I begin my pimp I would like to state I know the ‘King Rolo’ has
already been pimped and I give my full pimped up massive appreciation to
this. Without it ‘The Mighty Rolo’ would never have been created. Respect to
my fellow pimpers!!

I am currently pimping it up on a gap year and am between school and getting
a job. I decided, (much to my parents and friends disapproval) that my time
is spent most productively creating giant food products rather then job
hunting. The Rolo is my chosen project as I was determined to recreate the
beautifully simple chocolate treat at a pimped up level…
Firstly I strolled down to my local Wilcos to pick up a ‘mould’ for my Rolo
production. Ideally I was looking for a large plastic bowl with a round base
and flat slanted sides and a smaller similar shaped bowl to create the
‘core’. After purchasing the afore mentioned bowls (which sides sadly were
not flatly slanted to my liking but rounded. However I made do), I cruised
down to Tescos and picked up my ingredients: 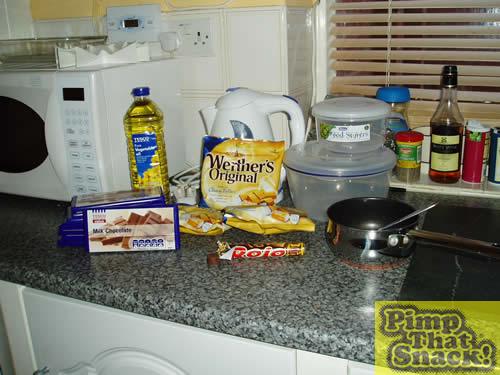 3 bags of Werthers Originals Chewy Toffee. (Perhaps use more. I felt my
chocolate to Toffee ratio was not quite right.)
10 (100g) bars of Tescos Value (Remember I am unemployed) Milk Chocolate
1 bottle of Tescos Pure Vegetable Oil (for greasing purposes)
1 pack of Rolos (for sampling and display purposes)
This came to approximately £5.15

Production Commences. Pimpin baby!!
1. I tend to be fairly messy and I couldn’t find my mums apron, so I
fashioned myself a protective outfit out of a Morrison’s Carrier bag
(Careful kids!! Plastic bags can be dangerous due to suffocation) 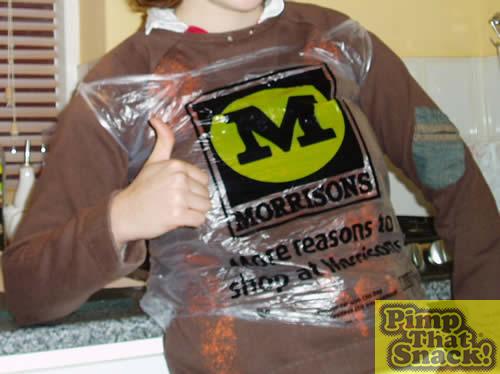 2. I then broke up my chocolate. This was both time consuming and painful on
the thumbs. I suggest using a hammer for easier breakage.

3. I then put some of the chocolate onto melt.

4. While the chocolate was melting I brushed the inside of the bigger bowl
and the outside of the little bowl with oil to prevent stickage later on.
(Remember to remove price stickers from the bowl or you get little pieces of
paper stuck to your Rolo.)
5. After greasing I returned to my chocolate to find that it had taken on a
strange grainy texture. I feel this is due to my reckless inattentive
behaviour and neglect, or the fact that I burned it as I did it in the pan.
I attempted to rectify this by adding a splash of milk. This made my
chocolate lumpy and sticky. – not good!! Start again!! Use the bowl over a
pan of simmering water method!! 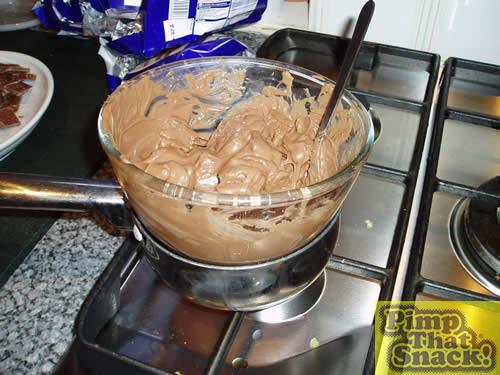 6. I then poured the chocolate into the base of the bowl and placed it in
the freezer.
7. In the meantime I melted more chocolate.
8. I then placed the smaller bowl on top of the now solidified base and
added the melted chocolate so it goes up the side of the smaller bowl. (Here
I had underestimated the amount of chocolate required so had to go back to
Tescos (N.B. Remember to take off the sexy apron before leaving the house.)
and buy 9 more bars of chocolate. This adds a further £2.25 to the price,
taking ‘The Mighty Rolo’ up to a grand total of approx. £7.40. (this value
not include health and home insurance required for production of ‘The Mighty
Rolo’) 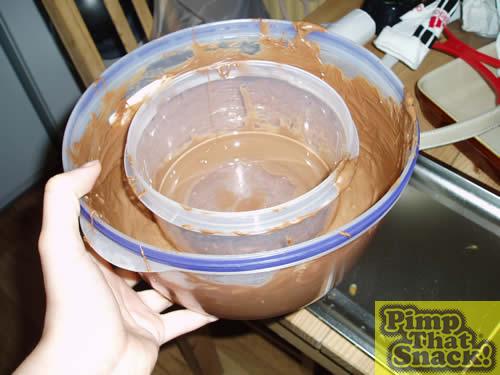 9. Melt some of the newly purchased chocolate and finish pouring up the side
of the smaller ‘core’ bowl. Replace in the freezer until set.
10. Whilst this is occurring unwrap all the Toffees. This is time
consuming. Get some friends round! 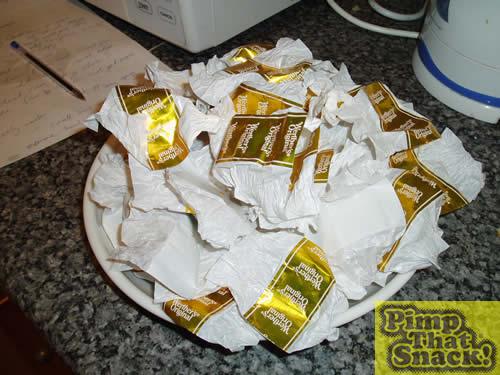 11. Put boiling water (Careful – It’s hot!!) into the core bowl and
carefully twist until the bowl is removed, creating the core space. 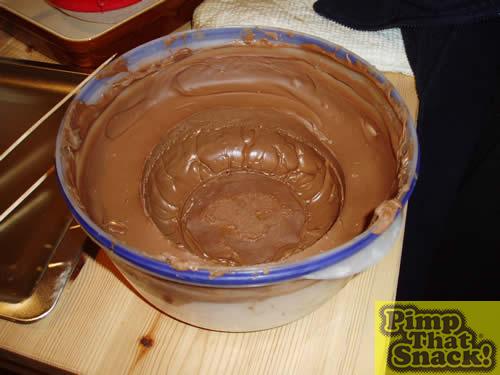 12. Melt the Toffees in a glass bowl above a pan of simmering water, adding
tiny amounts of water to aid viscosity. (It’s pretty tough at first, but
loosens up later on.) 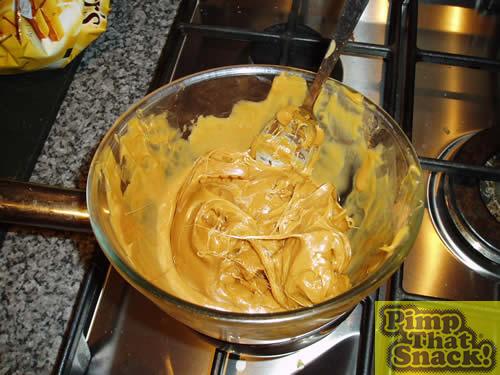 13. Pour into the toffee chasm and return to the freezer. 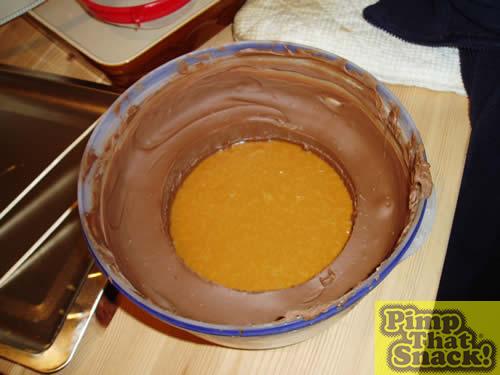 14. Melt remaining chocolate and place on top of the toffee and spread
across, filling up the larger bowl. Freeze time baby!!
15. Once set place in a large bowl of boiling water (careful again – it’s
still hot!!) and remove from larger bowl.
16. Engrave the Rolos trademark rings around the top of the Rolo. 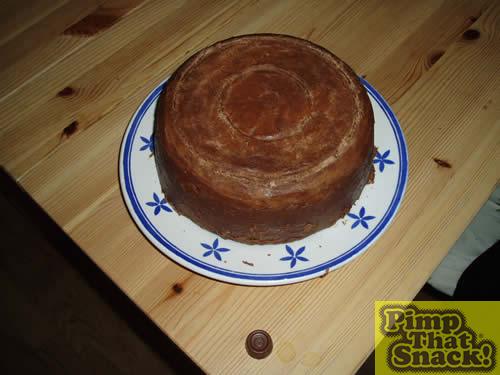 17. ‘The Mighty Rolo’ is now complete!!! Amazing. Weighing in at approx.
21.35kg it is impossible to cut. Leave out of the fridge for 3days. The
toffee then begins to ooze making it easier to slice. (Careful!! – I
required medical attention after the knife slipped.) 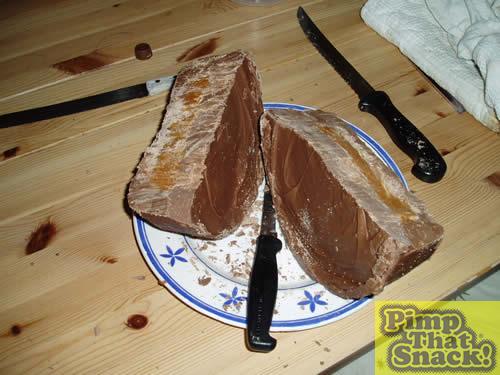 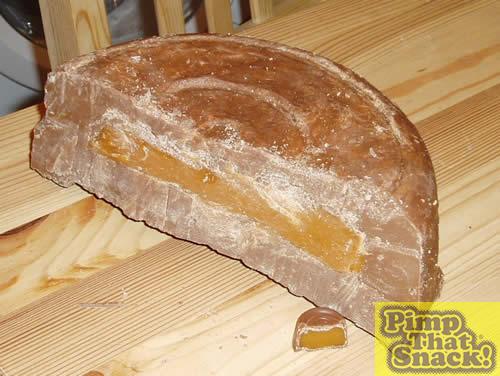 ‘The Mighty Rolo’ is beautiful melted down using an industrial blast furnace
and poured onto ice cream. Please note do not take to the cinema for a film
viewing snack. It gets messy. Also do not give any to your grandma. It may
kill her (due to high calorie content) and plays havoc with false teeth.
I fully enjoyed making and consuming ‘The Mighty Rolo’. This pimp was
created 2months ago and I have only just got round to typing it up. I am now
employed and looking to my next project!
Please forgive me switching between tenses and other grammatical errors.
Respect to all Pimps and Pimpers!!