After deciding to get pimping it took us about five seconds to plump for a Cadburys Creme Egg. We decided not to let the fact that it had been pimped before put us off because we thought we could make the Creme de la Creme Egg! 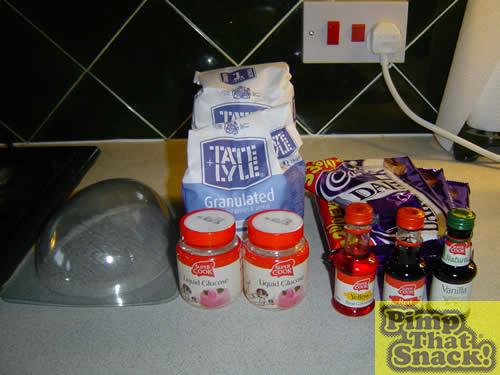 Our first challenge was obtaining out of season Creme Eggs for comparison and mid-pimp snacking but that was solved thanks to the internet. Three days later we were the proud owners of 48 of them! 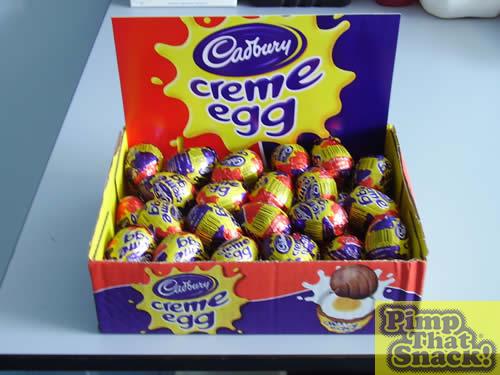 After procuring an Easter Egg mould (£4.32 from eBay) we were ready to go.

Making the shell:
Melt about 150 g chocolate in a glass bowl over a pan of boiling water. Spread the melted chocolate into the egg mould with a pastry brush. 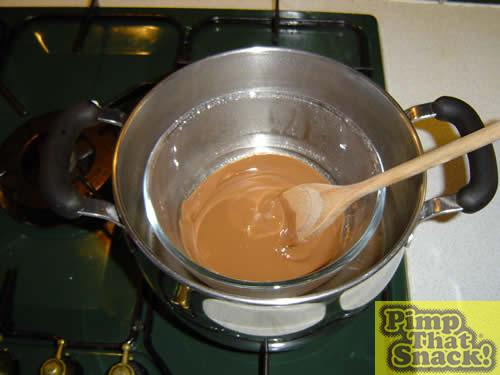 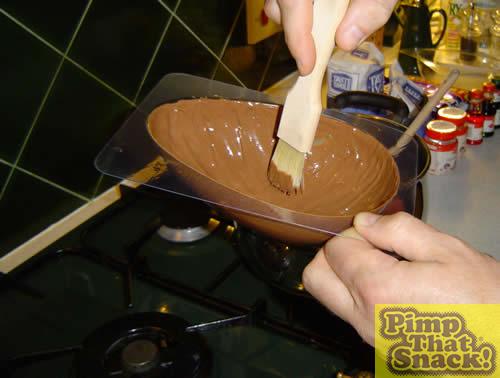 Place in fridge until set. Repeat 10-12 times to build up a shell about 1/2″ thick. Trim the edges with a sharp knife then pop the shells out of the moulds.

Engrave shells with the classic Creme Egg star and rings pattern and return to moulds for protection. 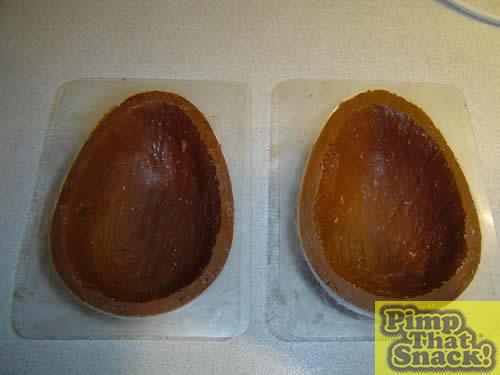 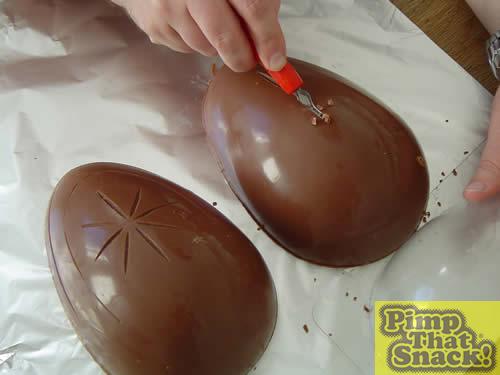 Making the fondant:
After a few not quite right small scale trials and a bit of research we arrived at a recipe giving the right taste and consistency. We recommend practising on a smaller amount first as it’s a bit tricky to get right!

Wipe the inside of a large saucepan with a very thin layer of butter. Put 3lbs of granulated sugar into the large saucepan and add 15 oz water. Mix and gently heat with stirring until the temperature reaches 107 ˚C. The mixture should be bubbling evenly across the entire surface at this point. 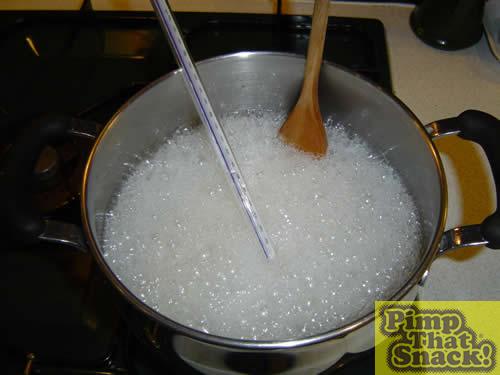 Add two 140g bottles of liquid glucose to the saucepan and gently mix in.
Increase the heat and bring the temperature up to 115-118 ˚C.

Boil for 15min and then switch off the heat and allow the mixture to cool to about 45 ˚C without stirring. The mixture should be clear and become increasingly viscous as it cools.

Beat the clear mixture with a wooden spoon. Gradually it will begin to go white and become thicker. At this point, a small amount of water can be added to keep the consistency right, not too runny, not too thick. Add the vanilla flavouring at this stage too. 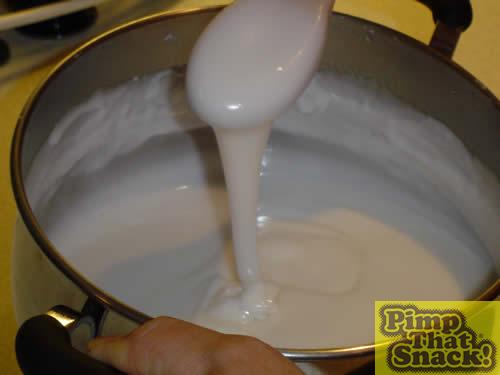 Allow the creamy white fondant to age over about 24 hours at room temperature in a sealed container.

Fill the two halves of the chocolate shell with the white fondant and place in the fridge overnight to chill and set slightly. 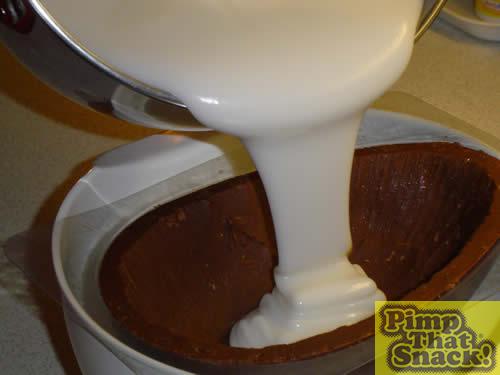 To the remaining fondant, add 3 drops of red food colouring and about 15 drops of yellow colouring and mix well.
Remove the chilled egg halves from the fridge and scoop out some of the white fondant from each centre.
Carefully drizzle in enough ‘yolk’ fondant to fill the holes and return just one half of the egg to the fridge overnight. The other half is kept at room temperature in a sealed container. 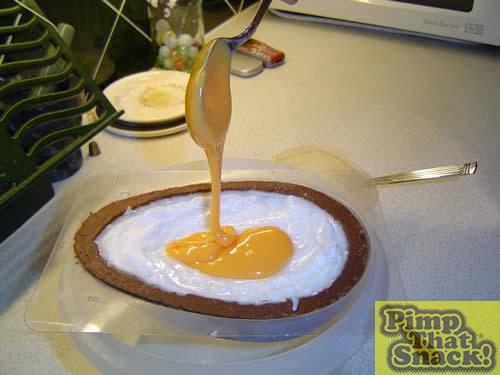 OK, time to put it all together. Melt about 25 g chocolate and carefully spread a layer, about 1/8″ thick around the flat chocolate surface of the half egg (still in it’s mould) which was kept at room temperature. 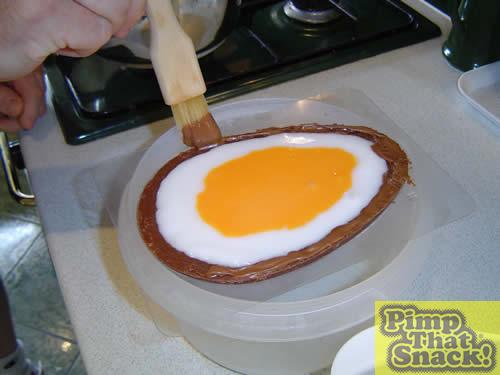 Quickly take the set half from the fridge and place it exactly on top of the other half and gently press the halves together. The fondant in the set half should be thick enough not to drip out when it is turned upside down. 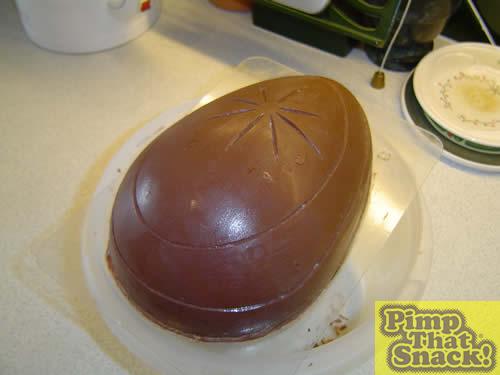 Place the whole egg in the fridge for a few hours to allow the join to set. Remove from the fridge, trim off any excess chocolate at the join and voila… The ‘Creme de la Creme Egg’!

The pimped wrapper: acrylic paints on aluminium foil. A work of art in it’s own right! 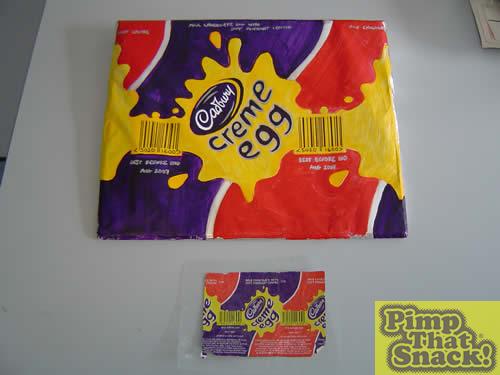 All wrapped up. Almost as big as the kettle!! 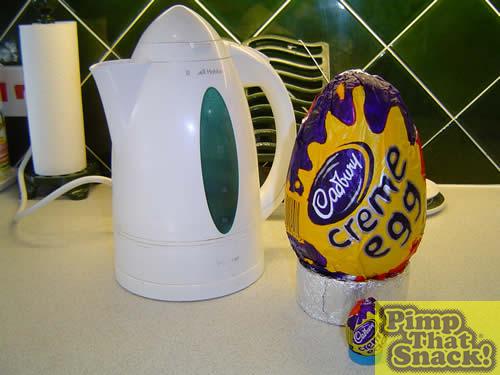 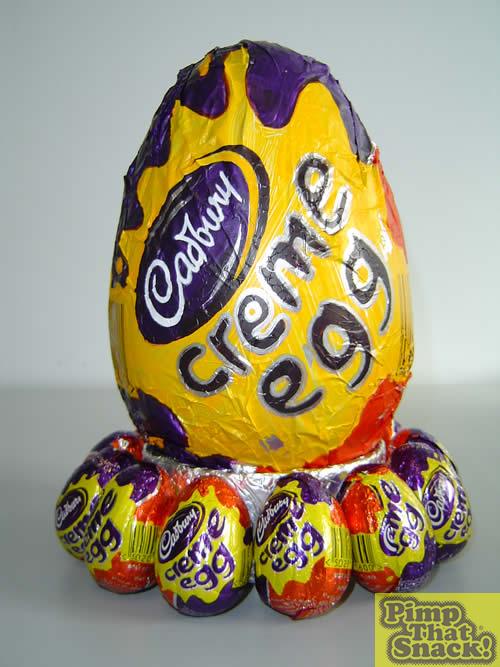 Unwrapped with the top carefully removed. 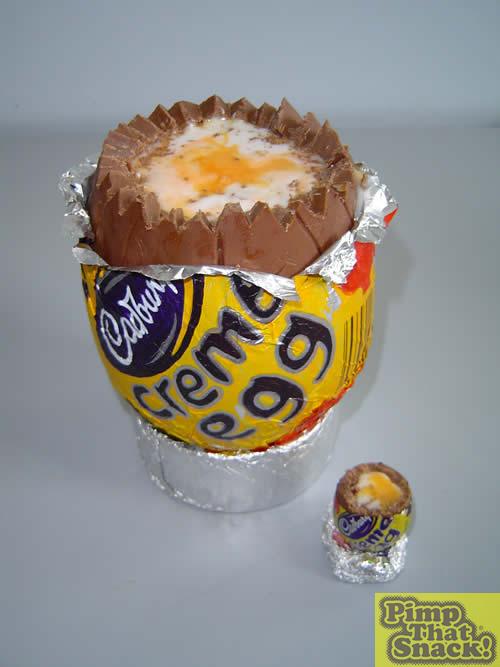 Since taking the pictures the Egg has been stored the freezer while we contemplate the best way to eat it. We’re thinking of maybe smashing it up and blending it into some ice-cream – anyone for a Pimped Creme Egg McFlurry!!