The Problem: A desire to create something worthy of PimpThatSnack.com, permuted by a lack of enthusiasm for most candy bars - and the two I really like have already been done (Twix, KitKat).

The Solution: Thinking slightly outside the box, we will create a pimp-worthy version of the Snickers Ice Cream Bar. With home-made ice cream. And dark chocolate, 'cause that's just how we roll. That'd be some sugar, some candy caramels, Party Peanuts, skim milk, Baker's Cream (Safeway was out of any other heavy cream), eggs, a vanilla bean and three, count 'em three 12 oz bags of chocolate chips, for melting. And we used all of them, too.

We (mostly Dante) first prepared the ice cream mix, which was all custardy, with egg yolks and a vanilla bean, and more vanilla that wasn't still in the bean, and milk and cream. I only got one picture of this stage though, cooking the cream with the bean in.

We used a double boiler. It melts quickly. Coated the edges of the pans (but not the bottom, 'cause we wanted that slight slope thing to narrow at the top, not the other way). We actually coated each pan on two sides, stuck it in the freezer to set, and then coated the other two sides. This went smoothly. Poured the ice cream into one of the prepared shells. The original plan had been to make two, with one being coffee-flavored. After filling the first shell, we realized that was all the ice cream we had. So the second shell is now just sitting in the freezer, empty. The filled shell went into the freezer for a while, to cure the ice cream a bit before finishing the coating process. In retrospect, it should have stayed in longer at this stage.

Then we melted some more chocolate. Not the first time, nor the last.

The melted chocolate went on top of the filled shell. This actually happened in two stages, in the hopes of reducing ice-cream melt. Not sure how effective that was, as there was definite melt at later stages. 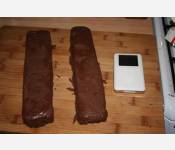