Step 1: The usual chocolate melting malarkey. Pour a thinnish layer into the tin and whack it into the fridge. 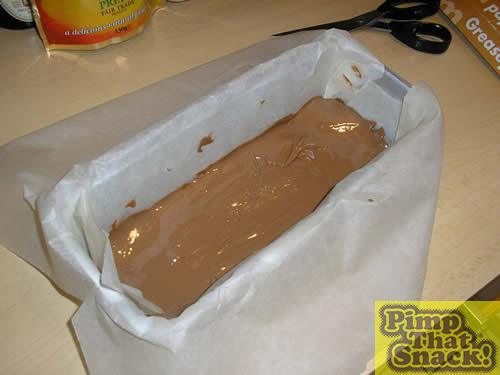 Step 2: Make the caramel. This can (and did many times) end in tears of brittle burnt toffee, even though all it takes is heating the sugar, water and butter – fellow snack-pimpers beware of heating it too long! Alternatively, the thinking person’s solution would probably be to buy some toffees and melt them, but we wanted this pimp to be effort-filled.

Step 3: Allow the caramel to cool and pour onto the chocolate. Re-fridge it.

Step 4: We ummmed and ahhed for a long time about how best to get the nougaty goodness of the Mars just right, and in the end decided that the only way to do it was to sacrifice many of PimpMars’ smaller cousins on the altar of pimpingness. So, we carefully sliced away the chocolate and caramel from 30 (well, 28 and a half…) Mars bars and melted the creamy nougat found inside. This meant that it was no longer very light and fluffy, but rather akin to some kind of glue, so we beat in 2 egg whites to try and restore the balance. This in fact didn’t really work and ended up not looking at all like the stuff in the middle of a Mars bar. Then it went back into the fridge.

Step 5: More chocolate for the base. Fridge.

Step 6: Turn out the almost-ready mother of all snacks, melt some more chocolate and cover the sides with calories. This was fraught with danger in the form of several nougat-quakes as the egg whites had had the effect of making the nougat rather runny, but with a bit of persistance the sides were covered and shored up by shoving the creature against the side of its dish.

A short while later… beautiful. Apart from the fact that it has the stability of quicksand, the nougat layer looks nothing like it should (but tastes just right) and that we got so carried away with making the swirls on the top of it that the top layer of chocolate ended up about an inch thick, it looks just like its smaller friend.

And as well as the huuuuge slab of calories that is the giant Mars, we also have the shells of 30-odd Mars bars to eat – probably enough to feed a family for a month, or power a small village for a week…