Picture the scene. It’s Easter Saturday. It’s grey and grim outside, I’ve just introduced my girlfriend to PimpThatSnack.com, and in a moment of inspired lunacy we decide that it looks like fun and we ought to contribute something. It takes about ten seconds for my girlfriend to suggest that the subject of our efforts should be none other than the legendary Jammie Dodger (Preservus Evasivus Maximus).

An hour later; we have supplies; we have ingredients; we have regular and mini Dodgers standing by for reference, inspiration and sustenance, and we have a Jammie Dodger recipe courtesy of Diana’s Desserts. It’s Pimping Time.

So we’ve creamed the butter, mixed in the sugar and eggs, folded in what seems like waaay too much flour, beaten and blended and folded and kneaded and generally mixed, wrapped the results in cling-film and left them to chill in the fridge for half-an-hour. Finally, we roll out the results into a nice thick slab of shortcake, a good 2 – 2½cm thick. Now comes the fun part.

Your basic Jammie Dodger has two layers of shortcake biscuit. The bottom layer has a shallow recess to hold extra jammy goodness, and a sort of repeating motif around the edge. As far as we can work out, it’s hearts alternating with a sort of stylised letter ‘M’… on a regular Dodger, it’s kinda too small to make out. So we just tried to imitate it as best we could, using some stiff card shapes wrapped in foil to press the patterns into the soft shortcake dough. 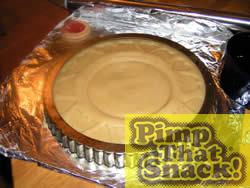 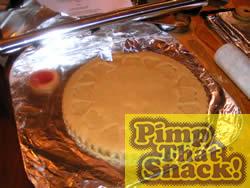 The most distinctive feature of this king among biscuits is the heart-shaped jam reservoir in the top of the biscuit. This goes right throught the top layer to the rich, jammy centre. For our monster Dodger, it was time to break out the heart-shaped cookie-cutters: 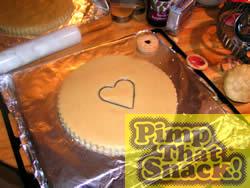 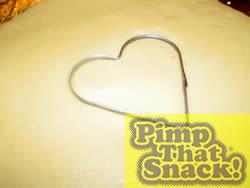 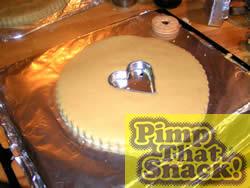 The top layer features a nice big “splat” shape, suggesting that the all-important jam was placed there by some sort of high-speed “jam impact”. Biscuit connosieurs will notice this differs from the original classic Jammie Dodger layout, a far more ornate, almost regal arrangement of intricate shortcake scrollwork. In the absence of suitable reference material, we leave that as a pimp project for another day, and turn our attention to making a pimp-size splat motif. A few deft strokes of the rolling-pin, and some nifty knife-work, and our top layer was really starting to come together. 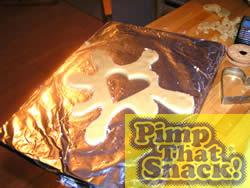 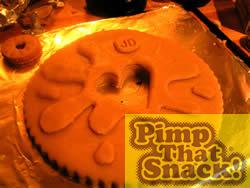 Now for the baking. Due to the immense size and formidable thickness of our monstrous Dodger, we deviated somewhat from the timings in the recipe. Our biscuits ended up cooking at 180° for a good thirty or forty minutes; alongside each one, we placed a couple of balls of dough the same thickness as the main biscuit, figuring that when the doughballs started tasting OK, it meant the biscuit was probably cooked through.

Finally, the all-important jam! First, we spread a thin layer of seedless raspberry jam liberally all over the bottom layer. Next, we carefully lifted the top layer from its baking tray, and lowered it onto the bottom layer. Finally, we melted the remaining jam over the stove, and poured the molten liquid jam into the heart-shaped well on the top of the monster Dodger; when the molten jam sets, it’ll leave a beautiful smooth glossy finish just like regular Dodgers. 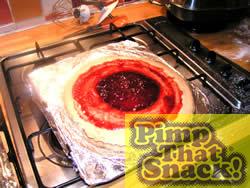 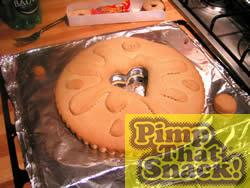 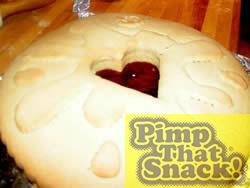 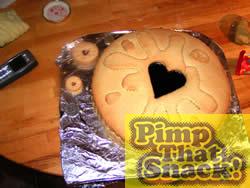 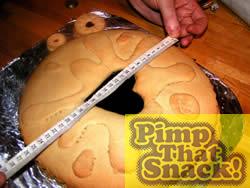 And the result? A mind-boggling 26cm Jammie Dodger, with all the fruit goodness of an entire jar of jam. Unless anyone has a mug of tea the size of a dustbin, I think we’ll probably eat in in slices with some vanilla ice-cream.