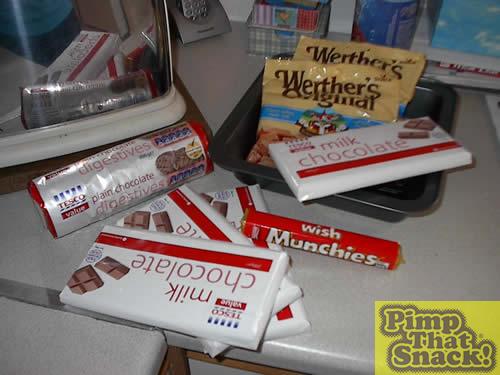 To begin put approximatly 2/3rds of the biscuits into a bag and use a rolling pin in a violent manner to crush. You may use a food processor or ‘blender’ for this, but I find after a hard day at work this method is easiest. Note – don’t bash to hard else the bag splits open and biscuit cascades all over the kitchen!

Once the biscuits are battered add some melted butter ( I found this in the fridge which is why tis not on the list of ingredients, I just stole it) to bond it all together into a sticky mess. As you can see my biscuits weren’t very well bashed up, but I was in a hurry, I was hungry. 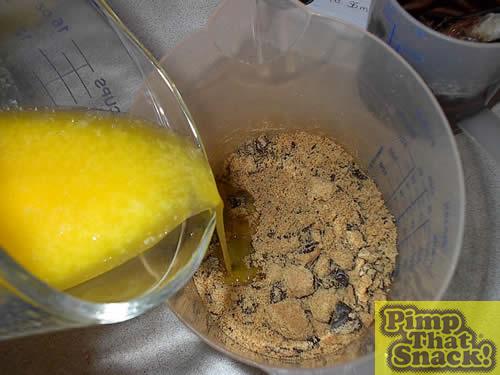 The biscuit goo is then pressed into a shallow round tin and refridgerated until set solid into one gi-normous biscuit. I used foil to line the tin as its easy to peel off. 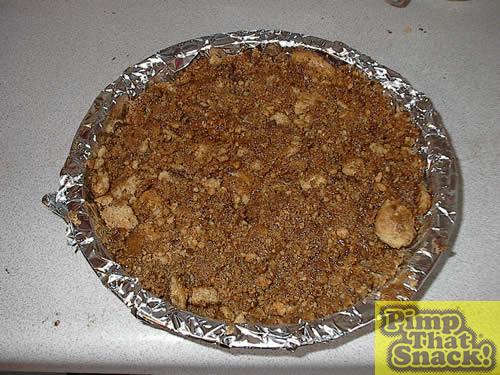 I also lined the square tin and a small bowl with foil, mainly cos I like shiny things, but again because its easy to peel off set chocolate. I put the bowl into the tin in order to create an indent for the sides of the munchie.

I then melted the chocolate (in the microwave, sorry!) and poured it in round the bowl. This is where things started to go wrong. I put it in the fridge to set but then realised there would be no chocolate under the bowl and so a huge hole in the top would be created. I painiced and removed the bowl, remelted the chocolate and put it back in the tin without bowl. On reflection I think you should put the choc in, then press the bowl in on top to create walls.

While I was begining to regret starting this project, I waded through the chocolate to melt the toffees and added a little bit of milk to make them more caramelly, then poured that on top of the set chocolate, then put the whole lot back in the fridge again while I started on the mountain of chocolate covered washing up. 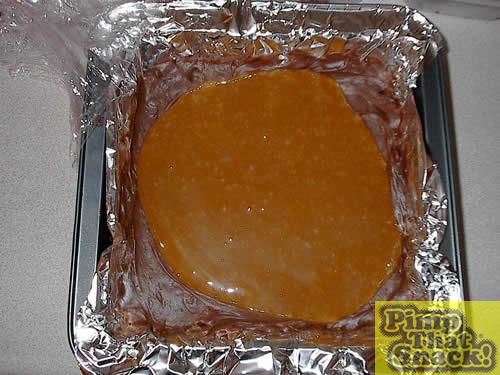 Once the caramel was tacky I removed the giant biscuit from its foil prison and pressed into into the top of the caramel. After doing this I foolishly desided there was not enough caramel and so set out to the shops for more toffee, repeating the caramel stage above and pouring round the biscuity base. 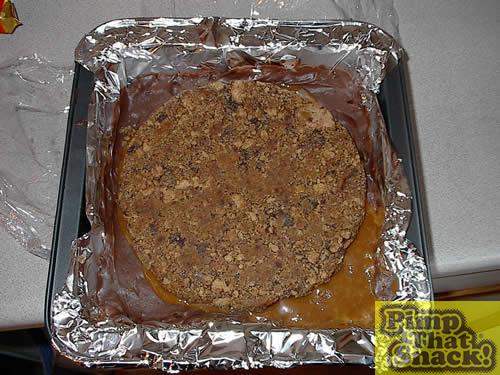 After all that I melted yet more chocolate (diabetic nurse at the ready please) and sealed the whole dam lot, then – you guessed it- put it back in the fridge! 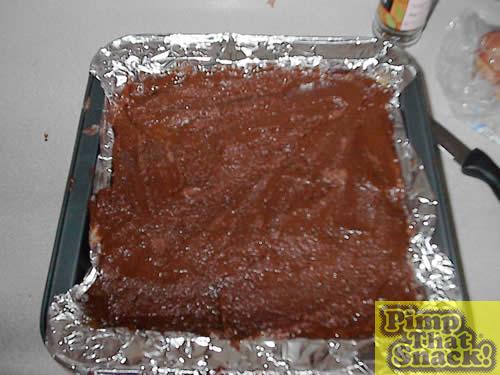 Two days later my dad began yelling about the tin in the fridge taking up valuable space for his yogurts, so I removed the beast and peeled back the foil for the comparision shot. Unfortunatly I had forgotten about my panic attack which ment the munchie had no walls and all the caramel immediatly began its escape, pouring out of the munchie, accross the worksurface and on to the floor in a bid to take over the house. Carrying on regardless I drew the munchie marks on top to finish and shoved it back in the fridge before any more caramel escaped. 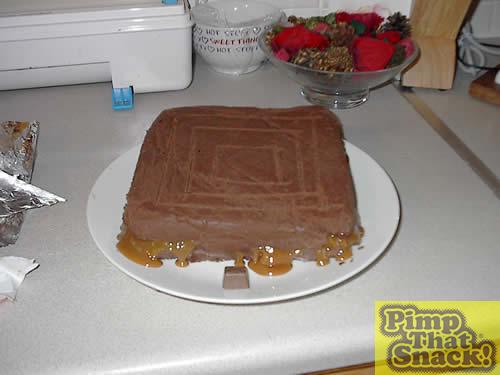 When I was brave enough to actually try the mega munchie, it did taste yummy and just like the real thing, I say did as it has already been eaten as my sisters back from uni and spotted it in the fridge. I ‘d love someone to give it another go and be more successful, meanwhile im still scraping caramel off the kitchen!