The kinder bueno is a beautiful thing to have in your pocket.. but I thought to myself one day, wouldn’t it be more beautiful if it lasted just a little bit longer…? So, with 3000 more words of a disseration to write and time to waste I proceeded…

The first pimp hurdle to occur was how to construct the all important Kinder Bueno arched shapes.. Many tools (such as tin foil) tried and failed to succeed in this when all of a sudden my gaze fell upon …the rolling pin! that i had been using earlier.. I assured myself that rolling pins were oven resistent and proceeded to drape my wafer sections over it..The rectangular base was then rolled out and both parts were put in the oven (fairly hot.. for oooh, 20 mins?) 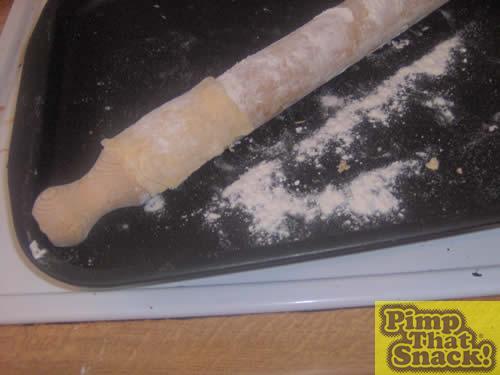 3) Once the wafer base was ready I inserted it into a sub-zero environment for approximately 10 minutes, spread the chocolate on it and placed it back in the freezer.. At this point i should mention.. the recipe for ‘Wafer’ was actually more like a biscuit recipe.. so the internet lied.. but what can you do? By this point too much love had already been invested ..I couldn’t turn back.. 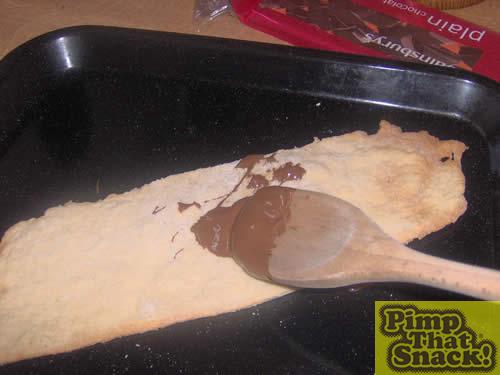 4) Now my friends, comes the crux of this pimpin adventure.. how was I going to construct the bridge like connections between each arch?? After much thought, diliberation and consultation it was decided that more pastry would be used connect the already baked arches..using a little beaten egg as glue and a gentle touch.. There were pictures, but I don’t think my camera could handle the intensity of the moment and deleted them in protest… Once the arch part was baked it was frozen, removed, smothered in chocolate.. then placed back in the freezer…then some melted dark chocolate was used to created the criss-crossy pattern on top..back to the freezer 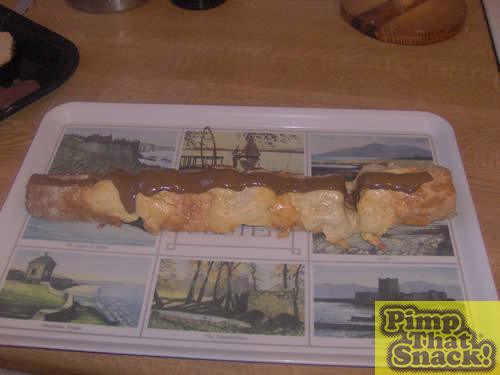 Meanwhile back at the ranch.. I concocted the essense (sp?) of the Beuno by blending chopped hazelnuts, cream, sugar and butter then placing in the freezer.. Once again, there were pictures..(really there were)… but the beauty was too much for the camera to behold *sob*

So then the now soild arches were removed from the freezer.. here’s a tip. A palette knife submerged into boiling temperatures is a beautiful thing when trying to remove chocolate from hard surfaces.

They were tipped upside down and filled with hazelnut goodness.. The arches were then sat on the base..and more chocolate was applied as glue *phew* back to the freezer.. 15 mins later.. the excess around the edge was discarded (yum) and..yes we went back to the freezer…

5) And here he is in all his glory.. I think the picture speaks for itself.. Kinder Beuno is a puny 11 cm.. Beastly Beuno rocks on the scale at a huge 33 cm 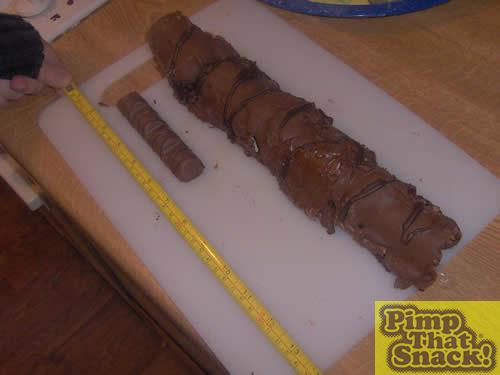 6) The all important cross section….. Just try lickin’ his ripples..GRR.. 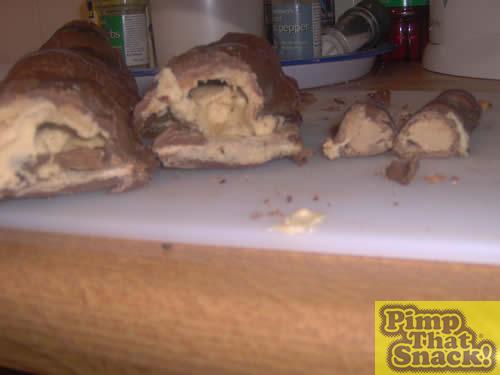