This is the second time we have attempted to pimp a hula hoop. The first try
ended in everything being covered in potato when it turned to liquid and
exploded all over the oven. But we were not assuaged by the fiasco and
returned with a brand new plan, and matching aprons made by middle eastern
lepers.

First we selected our brand of mash from the three varieties purchased. We
decided on tesco’s instant mashed potato for its smooth consistency and lack
of dried milk or anything else not found in hula hoops.

Into the bowl it went, and out of the kitchen I went. I was not prepared for
the vile smell, somewhat similar to rotten grass clippings, that the mash
seemed to be giving off. Not to worry, surely it will smell better when we
add the water, I thought. Oh no, this potato seemed to grow in its evil
desires the more water we added. Not even tescos rape seed vegetable oil
could tame the beast. Eventually the mixture started to resemble a sort of
breadcrumby dough.

We contemplated adding more water because it looked a bit
crumbly but decided that too much water may end in another eruption of
boiling hot liquid potato. But the foul smelling concoction contained
everything a hula hoop should. (Proper old style hula hoops before they made
them "healthier" with 50% less saturated fat and put rice flour in them. And
anyway, if I wanted to be healthy, would I be eating hula hoops? No.)
Dehydrated potato, vegetable oil and salt. So surely we couldn’t go wrong.
Atleast that was what we thought. So we ignored the stench and powered on
through.

The next step was to pack it into our pimptastic hula hoop mould fashioned
from two cake tins, one inside the other. The mash mix was crammed into the
void between the two tins. 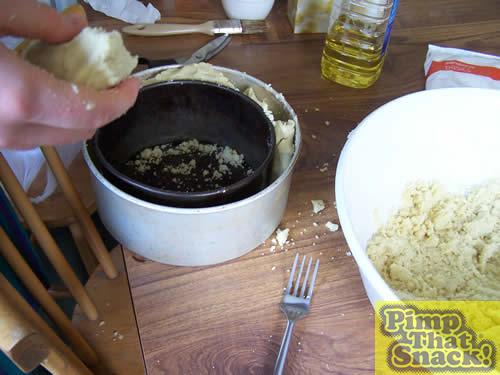 The middle tin was then removed so water vapour could escape. To prevent
collapse baking paper was put around the inside and baking beans were poured
in to keep it in place. Into the oven the fiend went. The idea was that
during the three hours in the oven (gas mark 1) a miracle would occur
leaving us with a giant hula hoop equally tasty as it’s minature
counterparts.

How wrong we were. Although the smell had almost gone, the taste was vile. A
whole bite would certainly kill a man. But on the plus side it is pretty
huge and does atleast resemble a hula hoop.

From this traumatic experience I have learnt that hula hoops are certainly
made by magic, the good people at KP Snacks are in allegiance with Harry
Potter and his wizardy chums and no mortal is able to make a perfectly
formed giant hula hoop (feel free to prove me wrong).

Please do not attempt this particular recipe at home as prolonged exposure
to such evil may result in permanent damage to your smell receptors and
quite possibly, brain haemorrhage.

But never fear, we will be back with a bigger and better pimp but I think we
will steer clear of potato based snacks.