Giant Freddo
by Sheila Anderson for £5.00

i filled mister freddo with clingfilm, and began the pouring method.... by this point it was 5pm and i was beginning to doubt the timescale. i had half filled the mould and now had to squeeze it into my fridge, every so often opening the door and pouring on/ spatulaing (yes, i invented a word there i think) chocolate on top of the chocolate, which had still not set. 5.45pm, i get a brainwave, and put the freddo outside, its scotland in december DUH its colder than my fridge! meanwhile, i make a giant chocolate button for my boyfriend with the rest of the chocolate, which when he comes round, he proceeds to eat all in one 2 minute sitting. eugh.

So approx 6pm, freddo still gloopy i have to drive 6 miles with it in the boot, and leave it outside Bob's house when i go in. half an hour later it is set, woohooo! I peel off the clingfilm and brush the creases with boiling water on a pastry brush, and voila!! Bob loves it, then the head falls off, but hey, it gave us a funny photo opportunity!! Total cost: less than a fiver!

Ingredients:
one fed up student
20 bars of tesco cheap ass chocolate, minus 3 burnt and probably one leftover to make a button..... so 16 x 100g bars
cling film
patience
clay
hairdryer
willing boyfriend to drive you to tescos 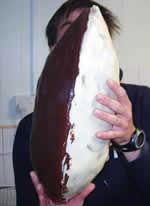