The *&$^ing thing has broken, breaking my heart in the process. It snapped in transit, apparently 3 spatulas isn’t enough for food so mighty, how foolish of us. Having got the girls into the kitchen I discovered that baked goods can be repaired! Good news. The slab was pushed back together and smoothed out. The cracks were then wet and rubbed to smooth them over, every one was happy once more. Into the oven she goes: I cant remember what temperature the oven was at or for how long the pimpbon was in there as I was almost weeing myself with excitement! If I had to I would estimate about 3.2 million degrees for 7 or 8 minutes. Out they come: Was a little disappointed in some crackage but it was the first thing I have ever baked so it could have been far worse. The process you are witnessing in the picture above is the “flip reversing” of the biscuit. This is an awkward procedure (rather like the blazing squad lyrics where the name comes from) but necessary to provide a firm base for the “chocolaty goodness”. The goodness was made in the 7 or 8 mins while the biscuit was in the oven, it consists of 2 big bars of chocolate and about half a pint of cream melted down also 4 spoons of coffee were added, the logic of this caffeine crazed manoeuvre appears to have been lost in the excitement but it made for a more authentic taste. On with the goodness: The top was then added to complete the pimpbon:

The pimpbon was later taken around to Jane’s house as a “pudding” for her Sunday roast. She was very happy with it.

Some people chose to have it served with custard but being a puritan I declined. I would recommend a strong full bodied red wine to accompany this meal, anything over 14.5% would be adequate. Cheese is an optional accompaniment to every meal and goes well with the pimpbon, I recommend a mild cheddar. Calories clock in respectably at just under 6500 of the bad boys and she weighs in at somewhere around 2kg mark (our scales don’t go that high so it’s a bit of a guess).

I have learnt two very important things from this experience 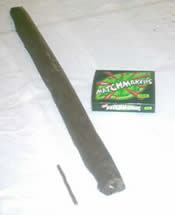