This snack requires a bit of patience and perseverance but you'll be rewarded a truly dreamy, decadent snack.

You'll need; 4 x 200g Bars chocolate
A bottle of caramel sauce
Glitter writing icing
Silver balls
Gold paper
(Ignore the cream in the pic, that was from my ill - advised try at making my own caramel sauce - a disaster reported later)


Now in the spirit of bling and decadence, I did indulge in Cadbury's chocolate to make my pimped snack, but I would have thought any supermarket - own brand chocolate would be adequate. Firstly, the slightly tedious job of making the individual segmants; I hunted arround in my cubboard and found a small tupperware that was a perfect giant - segment size. I also found a small plastic tray to use as the inside of the mould;

Unfortunately, I only had one of each meaning that I could only make the segments one at a time which was a total pain in the arse and took ages. The time spend waiting for each segment to set was of course spend drinking and eating more chocolate though so it wasn't a complete loss.

Now to get started... Firstly, as always, the chocolate needed to be melted. I did this in the microwave in short bursts, stirring every 10 seconds or so. In a bit of a clever moment, I kept note of the amount of chocolate I needed for the first segment so I only melted the exact amount needed each time. The melted chocolate was poured into the tupperware, and the inner mould pushed into the melted chololate, as pictured;

To speed up the setting process and prevent me from getting too plastered while I waited, I whacked my freezer up to the coldest setting and chucked them in there to set. After each one was done (about 30 mins), a couple of sharp taps removed them from the mould, then I popped them in the fridge till I had six segments. Next, the clever part. After a brief dalliance with the idea of making the caramel (which tasted disgusting and seemed to cover my whole kitchen in what can only be described as disgusting, foul - tasting molten lava), I popped back to the supermarket and purchased some toffee sauce which tasted fab and was exactly the right consistency. Into the segments it goes;

After a brief spell in the freezer to harden the caramel slightly it was time to put the "bottom" of the segments on, again noting how many squares of chocolate I'm using each time so that each one is even. To do this I put each segment back into the mould and toped it up, covering the caramel with more melted chocolate Unfortunately this involved using the single segment mould technique again so more drinking and waiting... Eventually, I had six segments ready to be joined together. After much dithering, I decided that the best technique for this would be to use more melted chololate, smoothing the joins for a more professional look; 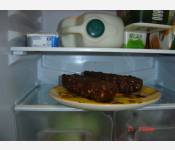