It all began democratically with a vote amongst the young people for the preferred snack for pimping. The Toffee Crisp came out top, though some of the girls suggested a Galaxy. “But that’s just chocolate.” The lads pointed out. “Exactly.” They replied. So Toffee Crisp it was.

Planning, planning, planning. The analysis had to be meticulous to ensure that the Pimping Saturday would run as smooth as melted chocolate off the back of a spoon, so a pimp dossier was compiled. A Toffee Crisp underwent the most thorough examination and trials, involving much measuring and tasting and a small scale prototype pimp. The descriptions of the existing pimps on Pimpthatsnack were also consulted (thank you everyone for this excellent anthology of snack pimp knowledge). This is a chocolate bar; not sponge, jelly and custard. It’s not to be trifled with. Though a pimped trifle is not a bad idea 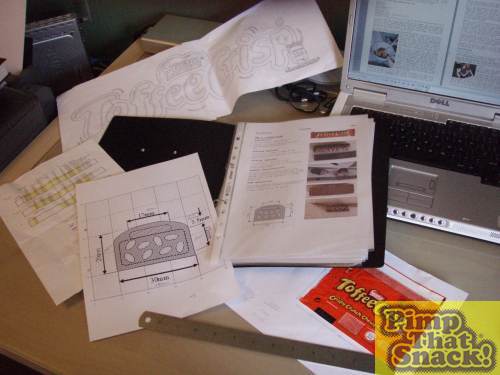 Saturday morning was spent fashioning a mould (with an authentic grid pattern on the bottom) and getting the last ingredients. All together:

a packet of rice crispy cereal,

and a couple of packets of butter.

It all came to approximately £20. 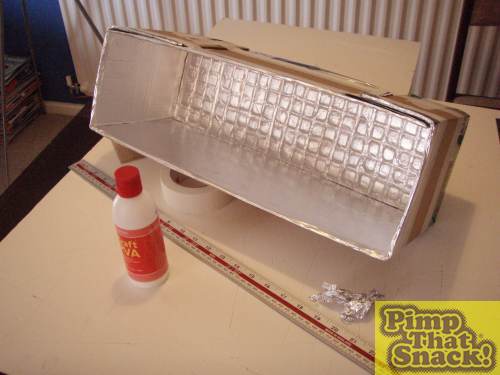 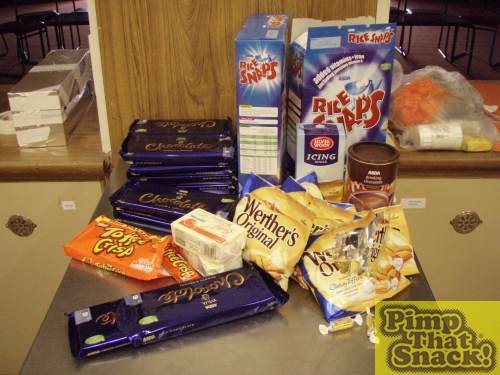 First phase was for James, Brogan and Chris to melt a small amount of chocolate and pour it into the mould to form the base. About 10mm for our Toffee Crisp which was to be about 482mm long (nearly x5 scale). Brogan started washing up the dishes ready for the next phase (top man!) as the chocolate was jammed into the fridge to set. (Mental note, all fridge interiors appear to be a little under 46cm deep and wide.) Meanwhile Athie and Molly started painting the wrapper. 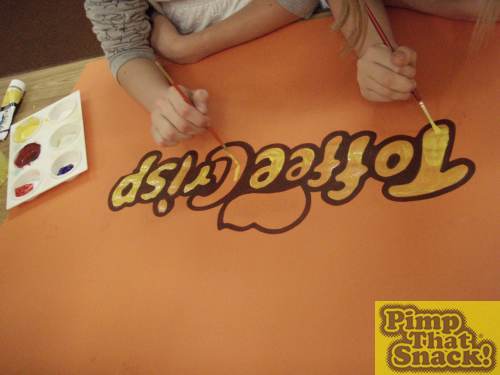 For the crispy insides, following the dissemination of lessons learnt from an existing pimp on the web site (the excellent Toffee Crisp Biscuit Project http://www.pimpthatsnack.com/project.php?projectID=320&pageID=1), we mixed about 800g of chocolate, a packet or so of butter, plus liberal sprinklings of icing sugar and cocoa powder to form a sort of coarse truffle mix to which was added the rice crispy cereal until the appropriately high crisp-to-truffle density was achieved. A quick taste test by Molly and Chloe confirmed the mix. This was scooped into an inner mould and once again left to set, with a chair keeping the fridge door closed. 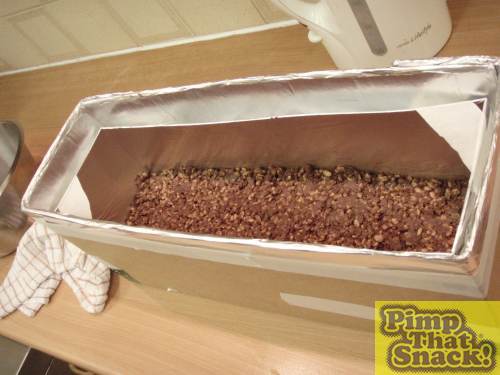 All hands on deck to unwrap the Werthers and pop them into the bowl. The melting of the toffees took a little time but eventually Alex, Dan and Charlotte achieved a smooth runny goo to which a little butter was added to help achieve a softer toffee in the final pimped snack. The video demonstrates the success or otherwise of this strategy. More butter next time perhaps. The toffee was poured out on top of the crispy centre with a half hearted attempt to obtain the slightly domed shape a Toffee Crisp has. Unfortunately, with the day quickly passing, such details, while authentic, became a luxury. Fridge again. 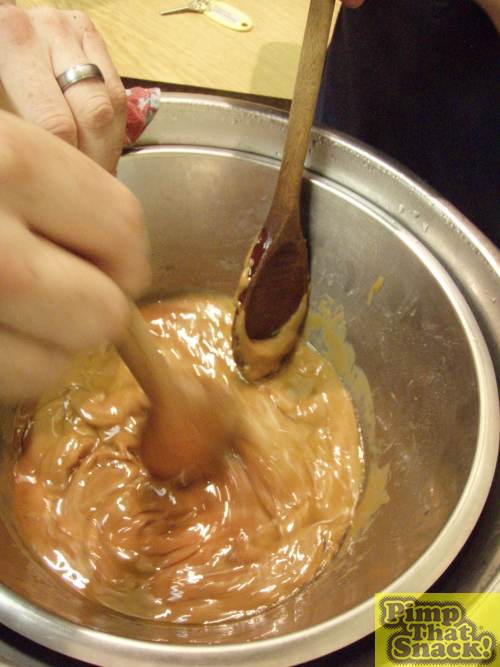 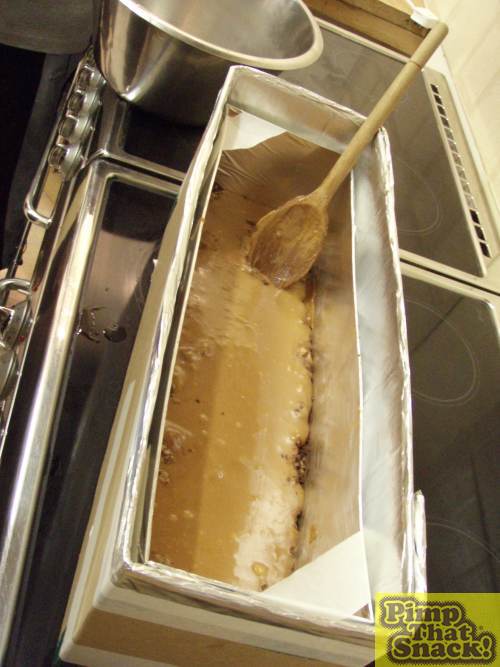 Then the rest of the chocolate was broken into the bowl, and the girls began to show special attention to the proceedings. Ian and the lads, meanwhile, calculated the calorific value of our pimp: 11691 Calories, 585% of an adult’s GDA. As before the chocolate was melted on the oven top over boiling water. The girls suffered only minor burns following vigorous stirring, and strangely chocolaty faces, cause unknown. 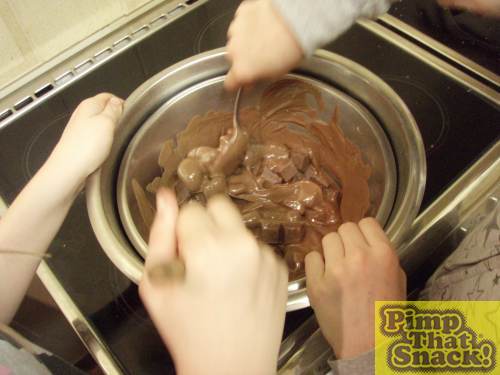 The inner mould was removed and the molten chocolate poured in over the top. A little flexing of the sides helped squeeze it down the edges. Tense minutes, hours, and even days followed as the mighty pimped snack sat quietly in the fridge. Once solid it was sat on its end to allow the door to be closed properly. I have realised why chest freezers exist. 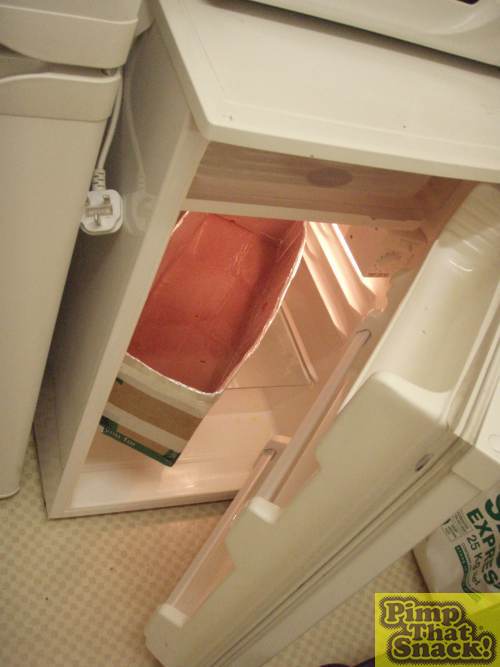 Nearly a week later (yep, a week), in preparation for the grand unveiling, the bar was removed from the mould and scraped down to tidy it up. A little remaining chocolate was melted and smoothed over the bar to give it that authentic rippled top and repair a few holes in the sides. This cooled quickly while the wrapper was stapled into shape. Job very much done. 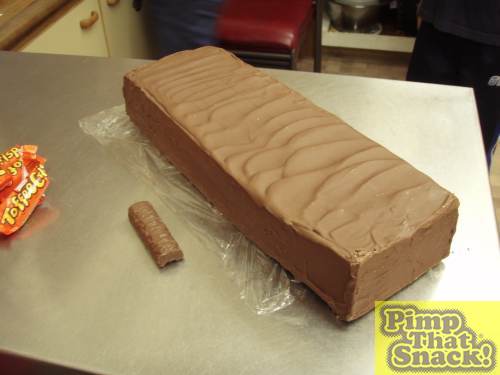 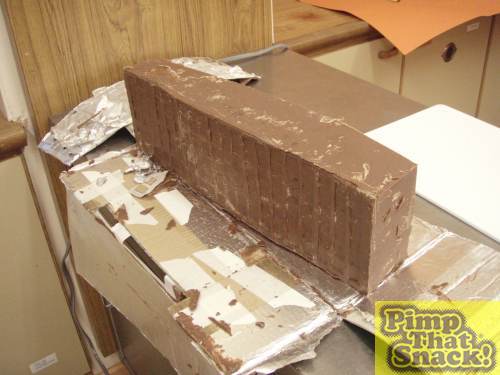 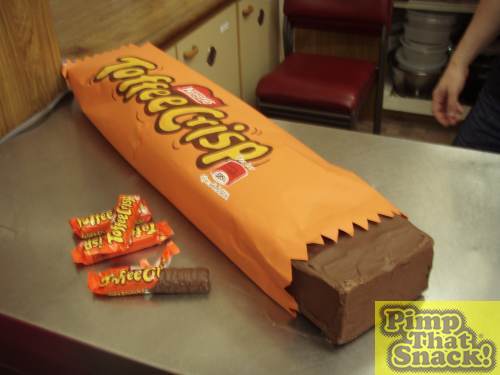 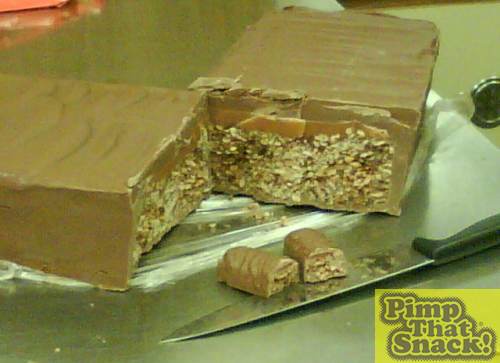 Everyone got a chunk, blunting several knives in the process. Check out the video!

Looked good and tasted lush. Is there anything else to say?