OK – this is our first pimp (be kind!) there has been an obsession with the pimpin’ for sometime now…. Below follows the pimpin’ virgin’s progress.

On a rainy Saturday in Dublin, 4 debutante pimpettes decided to try pimp the classic often forgotten ToffyPop (TP).. Obviously the ToffyDaddy pimpers had the same idea.. we can only bask in the knowledge that we can hold our ToffTastic Pop up high, it’s mammoth size and weight 6.11 lbs overshadowing any poor lesser imitation…….

First off, the compulsory trip round the local supermarket, as the TP consists of chocolate, Toffy and homemade (no supermarket pre bought rubbish for this ToffTastic Pop (TTP) shortcake.

Step one, shortcake – no proberlemo.. slight speed wobble when absence rolling pin results in gasp of horror.. but these pimpettes think on their feet and unopened beer bottle bought for thirst quenching purposes came in as great substitute. Same said bottle then doubled as refreshing drink while aforementioned shortcake was a cookin’. Eager inexperience came in the form of centre dough rising, but full pot of water and fast thinking action fixed what could have led to early failure. Base cooked, still on track. 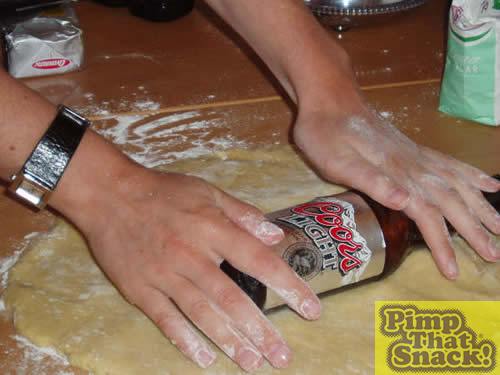 Step 2. Toffy centre and more drama. Poor instructions on can and a general ‘this is harder than it looks’ toffy making process meant a twice shy effort on this step. Burnt Toffy would have ruined the look and taste. Nothing like a challenge for these ladies meant that we could whip out 3 extra cans of Toffy (theory of better looking at it then for it came into its own). With one failed attempt under our belt we knew the pitfalls of Toffy making, we now also know how to get rid of bingo wing upper arms as LOTS (40 mins) of speed stirring involved. Sport bra also recommended for female toffy makers who might be a little top heavy. 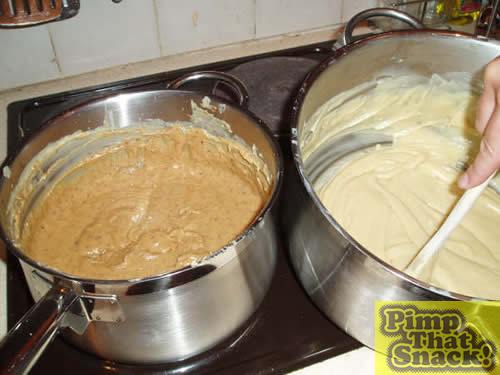 Step 3. Lava Hot Toffy poured into case and intricate detail filling and smoothing to ensure level playing ground for chocolate which is on its way. Decided on fridge over freezer to cool down our Carmel, didn’t wanna freeze the shortcake. Now down to choc melting.

Step 4.As avid pimpthatsnack readers we know about the peril associated with this often assumed easy task and after much debate we decided on the traditional method of bain maire (bowl over water). Chocolate melted and all that was needed was to drizzle the melted beauty all over our bad boy… feeling cocky, and almost smug we decided on the freezer to help set our chocolate first layer… “Chocolate first layer???” I hear you all shout in unison!! Yes, we took our baby out of the freezer and melted more chocolate while we gave her a short back and sides to ensure identical features to its much loved smaller companion. 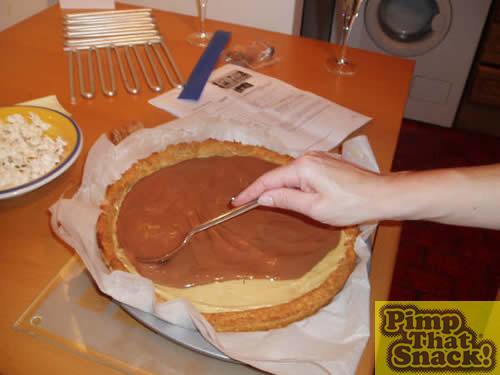 Step 5: Pouring the chocolate over the top we needed to get our chocolate lines in place and ensure a half side cover of chocolate around the sides of the biscuit – tricky, but we think we stepped up to the challenge. Back in the freezer for more setting and voila ! Let us present THE TOFFTASTIC POP 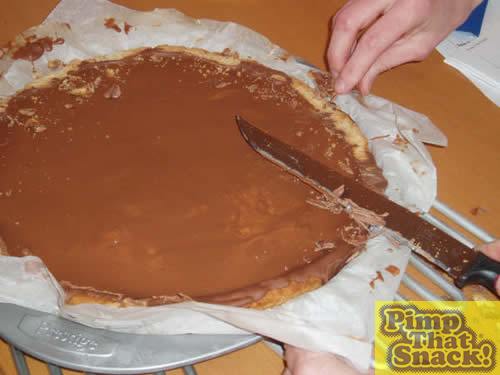 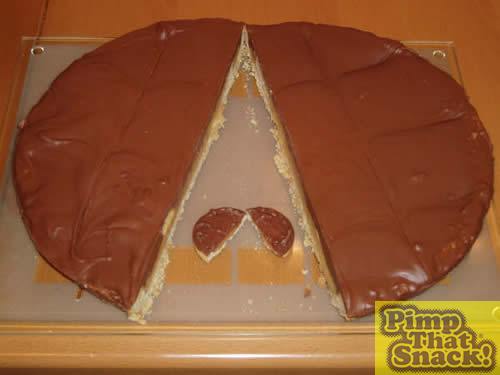 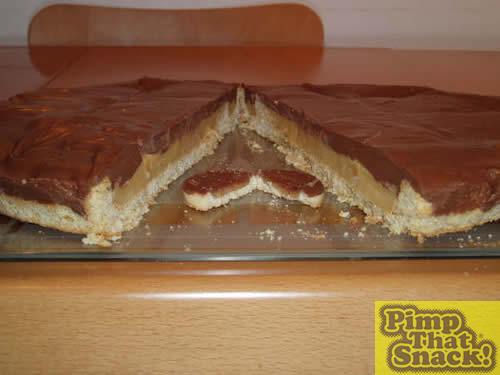 We would like to mention and thank the following for their part in today’s fantastic achievements.
Rolling Pin Replacement – The Beer Bottle.
Success in a drink – The Cava and her presenter and original owner Annie B.
The extra condensed milk cans… we couldn’t have done it with out you… and finally, Dr. Maeve for calling time of death on the first batch of Toffy…