I saw that docu-film Supersize Me the other week for the first time, and I
don’t know about you, but it made me really WANT a McDonalds. So there was
the inspiration
to create a truly almighty Supersized Big Mac™… the PimpedMac®. 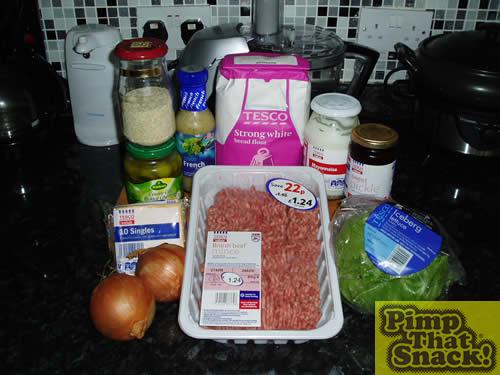 Some years back the McDonald’s corporation was kind enough to tell the entire
world exactly what was in a Big Mac™: "Two all beef patties, special
sauce,
lettuce, cheese, pickles, onions on a sesame seed bun." All quite straightforward
really, apart from that exotic-sounding elixir, special sauce. Just
what was so special about the sauce?

I could see this was going to need a huge
research effort to find out. 15 seconds later, thanks to my friend and yours – Google – the first link was TopSecretRecipes.com with the
precise consituents
of special
sauce.

It’s not really that special, but the recipe does point out that
like many great cordon bleu recipes it needs several hours in the
fridge to let the
flavours
develop. So let’s make the sauce first:

The dubious-looking substance is a tablespoon of grated
onion (and if chopping onions makes you cry, you seriously DON’T want to try
grating ’em). The rest is 125ml mayonnaise, 2 tbsp. French dressing,
4 tsp. pickle, 1 tsp. white vinegar, 1 tsp. sugar and 1/8th tsp. salt. Into
my Happy Bunnies bowl it goes: 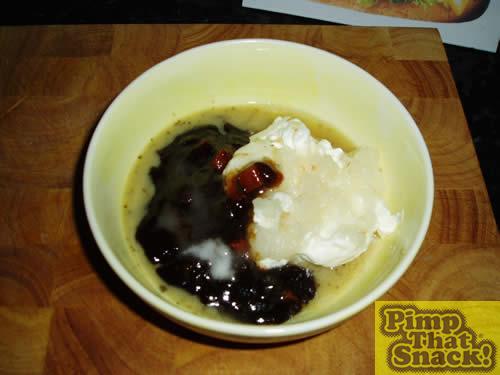 It looks so appetising already I had to exercise great self-control to prevent
myself from eating it. The chunks of pickle might have caused texture issues
so a quick blast from the blender sorted that out: 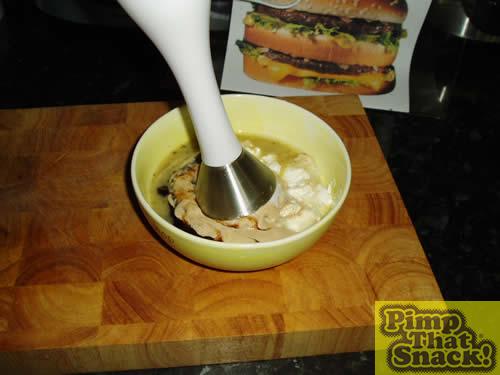 A quick taste, and amazingly, it does actually taste quite convincing.

After 90 minutes of the bread machine’s magic
we have
a rather
pleasing dough: 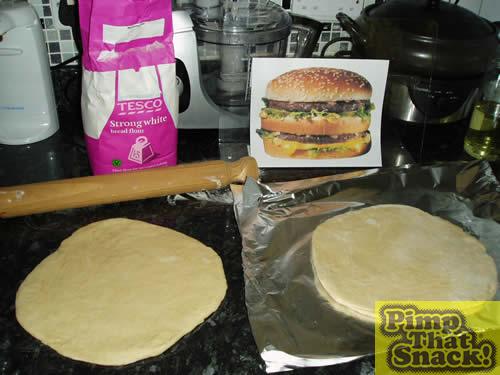 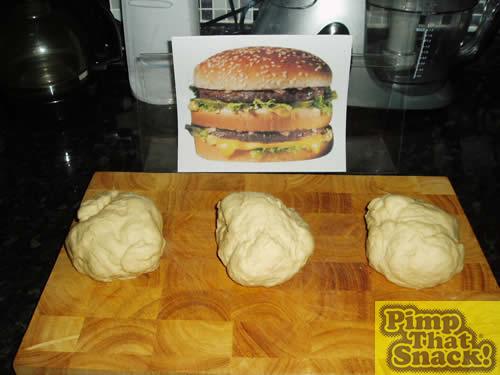 I don’t have baking trays big enough for these babies so on to oiled foil
they go. The substance on the far right of this photo that looks
like a bottle of urine is actually sunflower oil. It’s amazing what flash photography
does to colours.

Half an hour to rise….. so let’s check on the special sauce.. It appears to be thickening nicely. This is all going suspiciously well. After
rising, one of the three dough pieces needs brushing with milk and sesame seeds.
If you’re keeping up, you will have deduced that this will form the top layer
of the Sesame Seed Bun.

After 12 minutes baking, the bun is done… a bit mis-shapen perhaps but it
all adds to its rustic charm: 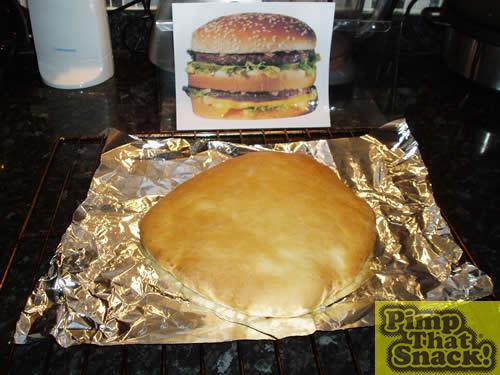 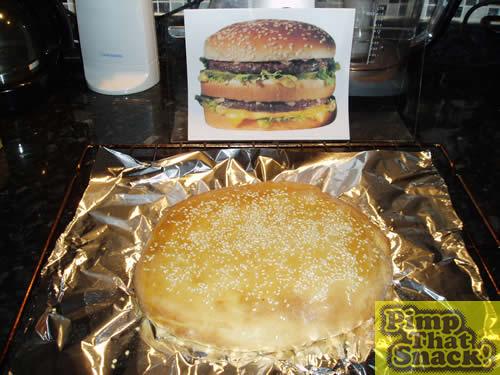 Now for the bovine bit. Take 800g of beef mince……divide in two……then bash into the same shape as the frying pan to make sure it will fit
when cooking time comes… 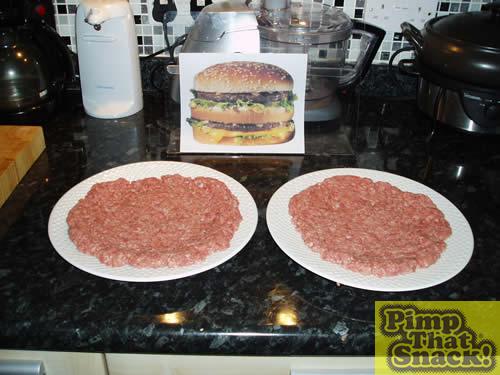 How’s that for Two All Beef Patties?

Okay, time for the plan to come together. With All Beef Patty ‘A’ spitting
furiously in the pan to my left, take Sesame Seed Bun Level One…..add Lettuce…..and Cheese. A Big Mac has one measly bit of cheese as evidenced in the
photo I’m following, but cheese slices come in packs of 10 so it would be pointless
to waste any. Notice how the slices at the front, like the lettuce, have been
jauntily placed to protrude enticingly when assembly is complete. 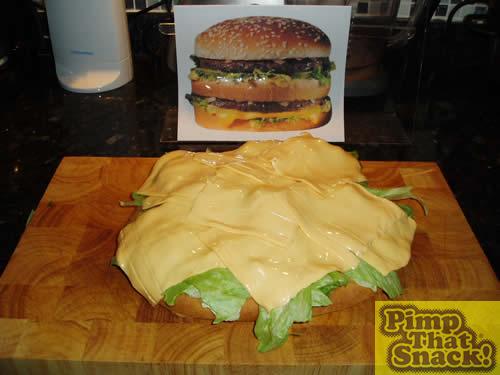 After flipping the burger (well, not quite flipping; putting a plate on top
and upending the pan, since I don’t fancy pancake-flipping a pan full of meat
and boiling fat) it’s onto the cheese and some chopped onions complete this Layer One. 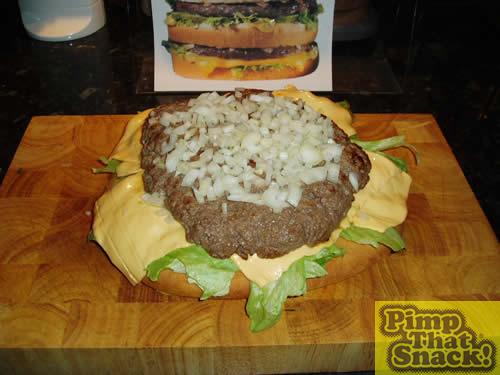 Layer Two, of course, has the Pickles. Half a jar should
do it. 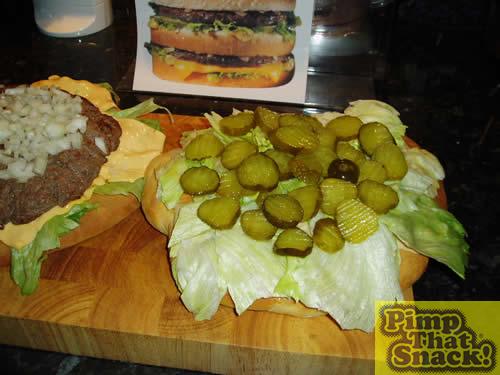 And All Beef Patty ‘B’ completes Layer Two: 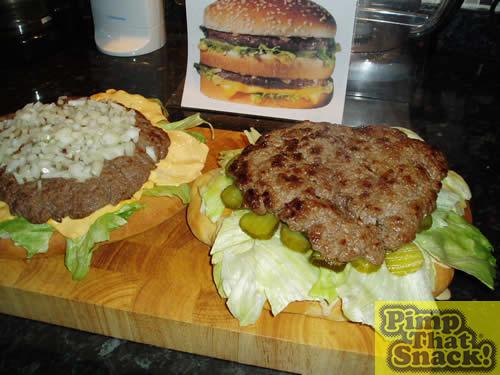 At this point my cat came to see what all the excitement and fat-spitting
sounds were about. She didn’t seem too thrilled with the gherkin I gave her.
Fussy cow.

Feline diversions over, final assembly could begin. The foundation is laid. Then Layer Two is hoisted into position: 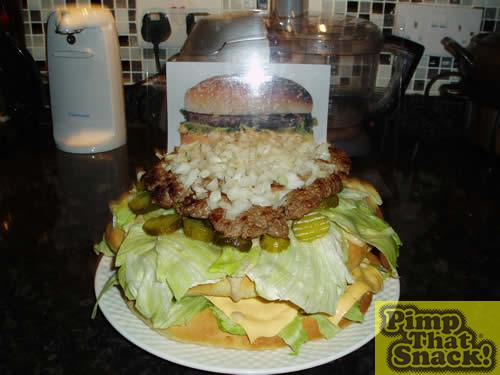 And finally the Sesame Seed Crown is carefully positioned. I can barely contain my excitement and camera shake is setting in, although
that could be to do with the Bacardi and Coke I’m swigging to calm my nerves.
A quick blast from the blow torch helps the cheese at the front to melt in
the
same
way as
in
the photo: 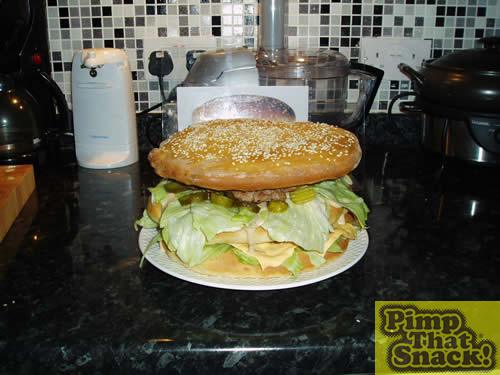 Pimp Daddy wants one of these 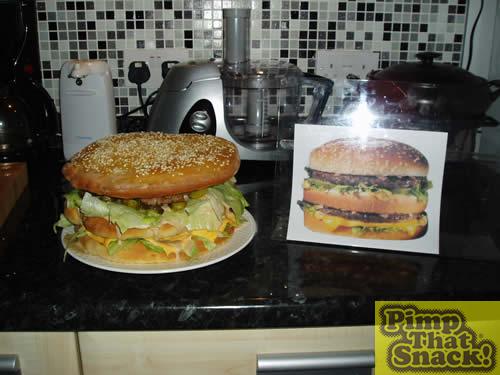 and one of these

I did actually buy a real Big Mac™ the previous evening to do a size comparison
but regrettably after an several hours’ drinking in Manchester I ate
it on the
way home. Instead I got the trusty ruler and scales out.

9 1/2 inches in diameter and nearly 2kg in weight (without the plate). That’s
MacTastic! Finally, and although it breaks my heart to do it, the obligatory
cutaway photo: 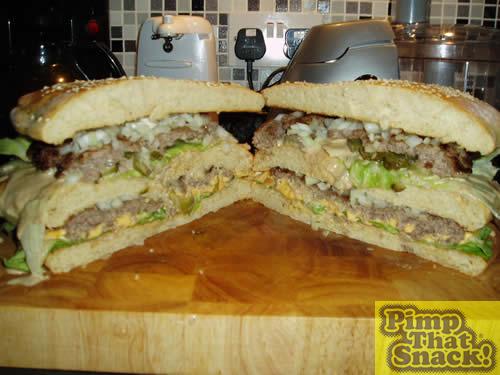 and all of this. yum!

There we have it. Morgan Spurlock eat your heart out!