Monsieur said if we were gonna pimp any snack it had to be the Ferrero Rocher coz true snack daddys need to be spoilt. Did he have any pointers for us? You’re damn right he did… “It’s all about the wafer,” he said as he sipped on his gin and juice and kicked back on his chaise lounge. Remove cream filling from Oyster Delights with finger and scoop (doggy dog) directly into mouth. Pick off the chocolate and coconut topping with fingernails (get your ho to do this with her new acrylics) Gentle is the name of the game at this stage. These baskets ain’t taking no slam dunk. It’s all about the gentle lay-up. Softly, softly cut the bottom off two wafer baskets. After breaking half the packet we realised if you wet the bit you needed to remove, the knife will cut like a Ya Mamma joke. Fill one half of an oyster shell with Nutella and then attach to the wafer basket with more Nutella. Turn over and carefully fill the rest of the basket with Nutella. Repeat steps 1 to 4 for the other side. 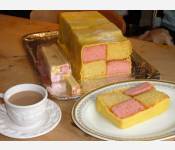