We weren't completely idle in this time though, and got to work at unwrapping the toffees. You know what they say; many hands make light work.

And then the toffees were melted, as if chocolate. However, we found that the toffee never really got too soft – the Werther's toffees are probably a bit too hard, if you try this, we'd suggest using Tesco's own Dairy Toffees, or similar, here's a nice shot of it going 'gloop' (this is a highly technical pimpin'-term – don't worry if you don't understand it): However, at last it was soft enough to try and put on the biscuit. However, this proved somewhat harder than we thought, as the outside would set fairly quickly, and it seemed rather averse to running. Indeed, it proved impossible to spread with a knife, so in the end we just had to 'squidge' it down with thumbs and fingers. This proved highly amusing when one of us, talking on their mobile while squidging it down, put his fingers in some rather hot toffee, and emitted shrieks of pain. We regret that for this reason we cannot claim that no animals were harmed during the making of this biscuit.

Anyway, eventually we got all the toffee down. Then we faced a new problem; how to get the lined patterns on the giant biscuit. We were at rather a loss as to how to do this – engraving them on after wouldn't give the right texture, and they were rather funnily-shaped. In the end we settled on laying kebab sticks in lines across the biscuit, so we could pour on the melted chocolate, and then remove the sticks, to give a criss-crossing texture, although it wouldn't be wavy.

So, we made a nice little set up: However, when it came to pouring them on, we discovered a slight flaw in our master plan: the sticks moved! Chocolate was rather viscous, and pouring it over the sticks just forced the sticks out of the way, most unfortunately. With a bit of quick thinking, however, we decided to just use a stick and dip it in the chocolate on the biscuit and then lift it out, to give the texture. Ok, not quite such an elegant solution, but it worked. Finally, our work was almost complete, all that remained was to stick in the fridge, and then devour it. And of course, we had to compare it to the original biscuit! So, with much eating and scoffing later, we can give you the cross-section! 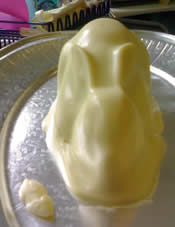 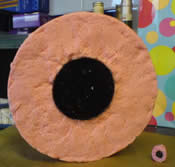