So we all remember and love those marshmellow biscuits we used to get as a kid, there is a nasty rumour floating around that you can still get them, but like everything in this life nothing is the same as when you were a kid, so we’ll count out those fakes and foneys that might be out there.

For the last couple of weeks myself and my pimpin’ protege have been racking our brains for a pimp that will bring back that "ah, man, i really want one of those now" kinda feelings. A bit like when you wake up in a drunken mess and smell something like a sunday dinner cooking, even if you couldn’t face a bite to eat, you need a roast lamb dinner in your life!

We decided those marshmellow biscuits you used to get when you were younger, the kind your nan used to give you as a treat, were the project for us. Unfortunately, the only time we would get to do this, is during overtime at work, in between actually doing our jobs and avoiding the boss’s watchful gaze…. so this ladies and gents, i believe is the worlds first undercover, james-bond style pimp.

The first thing we needed was the shortcake, we ‘adapted’ a scone recipe, told to us by the local wise woman. She told us it’d be fine… she promised… actually it didn’t turn out too bad. 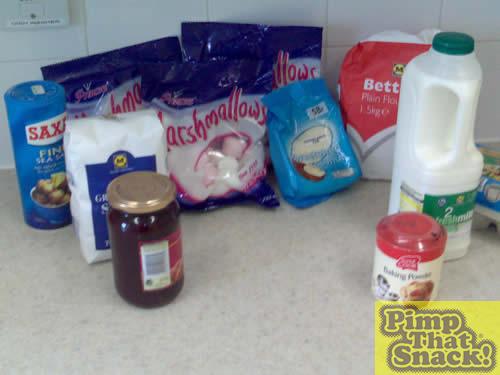 We preheated the oven and sifted the flour, baking powder and salt. She advised us to grate the butter into the mixture for easy needing, we naturally thought she was insaine, but it actually worked! Mixing in a silly amount of sugar, we went to stage 2. 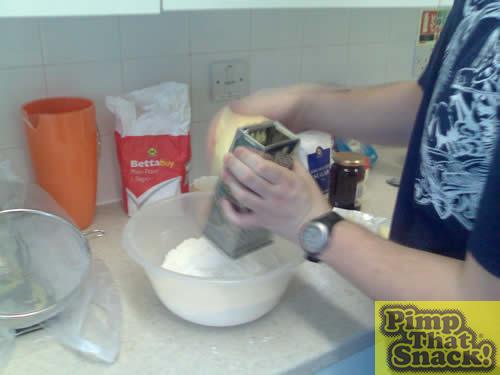 In a seporate bowl we combined a couple of eggs and a couple of cups of daisy’s finest. This was then unceremoniously dumped into the flour mixture whilst doing the best jamie oliver impression i could muster. After a lot of mixing, we managed to get a dough form. 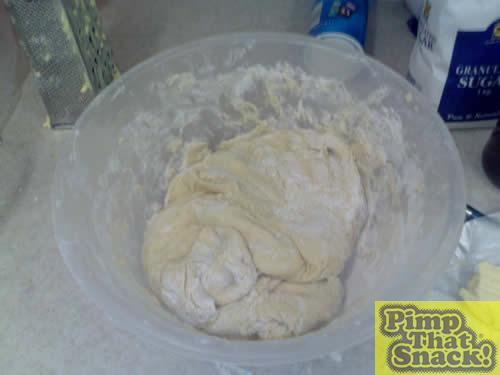 we laid this dough in a baking tray, crossed our fingers, put it in the oven a quickly scarpered back to our desks to avoid the boss’s wrath.

Next a collegue (a co-conspiritor now!) got the "buiscuit" out the oven. apparently it wasn’t adapted enough from it’s scone ancestry and still smelt (and tasted) distinctly scone-ish. BUT IT’S ALL GOOD! – we were on a roll (and a sugar high) now!. A bit of cosmetic trimming (let’s face it – we’ve all considered it! – but never had the guts!) and we’re ready to rock. 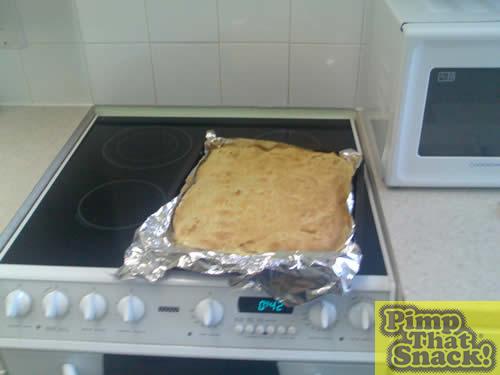 No time to loose – the night is drawing in and the shift is close to ending. Next was the marshmellow-y goodness. Being artistic and constructive people, we made a wall out of the white marshmallows we had, constructing the 2 rows. Then the messy part – we nuked the pink marshmallows in the microwave for around a minute, and what we ended up with was a flourescent pink, very sweet, tarmac like substance. Seriously, this thing was like moulten lava and stuck to any surface, they could end wars with this stuff. 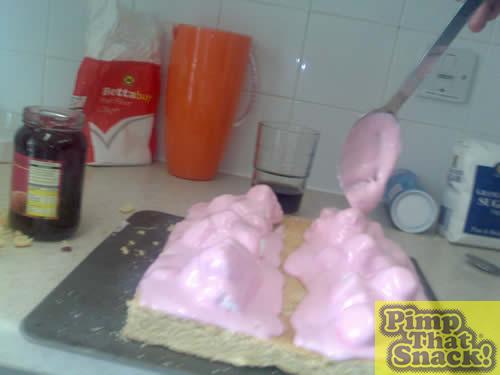 The jam was actually the easy bit – we went for seedless raspberry jam, we felt strawberry was so common, and your nan would never have had something as common as strawberry jam in her cupboard. 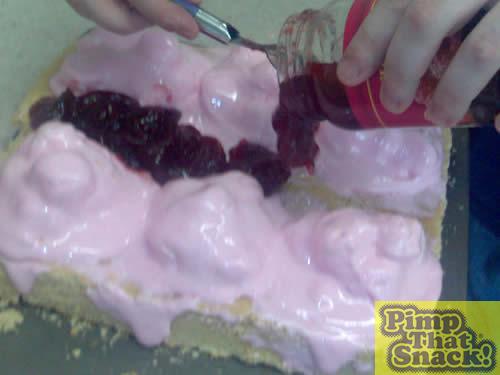 Finally the finishing touch, the sweetened coconut flakes, just for the ultimate pimpage. 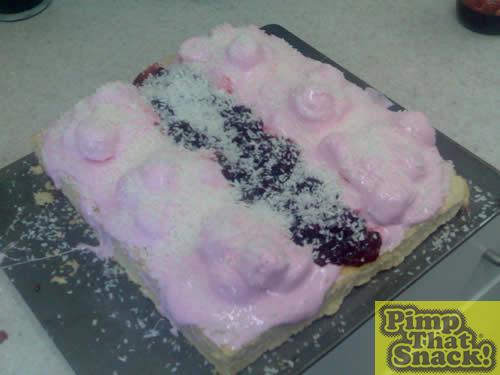 Tonight the pimp lives in the work fridge, tomorrow it will be sacrificed to the clients that we work with. Long live the Marshmellow Biscuit Impretza Sti, and all who munch on her.