Here’s the story of my mission to create the ‘Mother of All Kit-Kats’.

The Chunky Peanut Butter Kit-Kat is a wonderful, wonderful thing, and if anyone from Nestle would like to get in touch with me, stevepiers@btinternet.com, and send me some, I would be eternally grateful. The taste is so sublime, that it makes you start to wonder, how extreme could this snack be pimped, and what would it taste like?

Inspired by this, I decided to make it my day’s mission to find out.

First things first, I need some ingredients. A quick perusal of the label shows the KitKat chunky is “Crunchy Wafer Finger, Covered with Chunky Milk Chocolate”. First stop, Sainsburys. Unfortunately, not knowing how much chocolate I would need, the 400g bar of Cadbury’s Dairy Milk, even at the special price of £2.30, looked like it would not be enough. Then I noticed Sainsbury’s own brand at 100g for 25p. I bought a bar, it was very nice, and so I went back and bought another eleven. 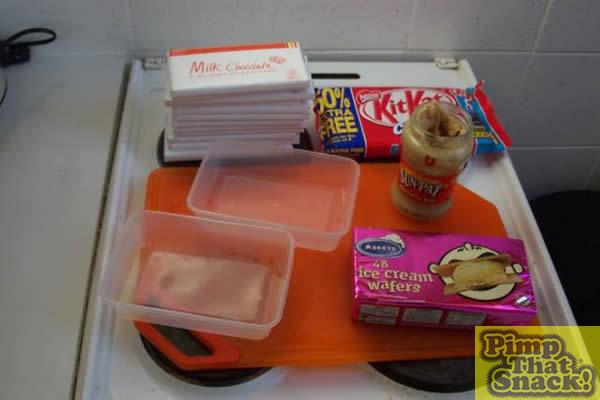 The only wafer I could find was Askey’s ice cream wafers, at 40p for 48 wafers. Astute readers will see straight away that’s less that 1p each. That’s the kind of bargain we like. I also needed some peanut butter from the fridge (Crunchy style, which we will later see is not ideal), and some regular KitKats for inspiration and moulding guidance. As I already had the peanut butter at home, the total spent was less than a fiver. I found two plastic dishes from a recent Chinese Take-out to use as moulds.

The next step was to melt the chocolate, and it’s here that it all started to go wrong. Without thinking of the consequences for myself or my family, I used the first plastic dish to melt two bars of the chocolate. The plan was to melt the chocolate, put the lid on the tub, turn it all upside down, and let it cool. This would form the base, the ridge that a real KitKat stands on. The top half of the KitKat would be made in the narrower bottom half of the other tub. This would leave me with two pieces, a thin layer with a wide brim, and a tall (but not as wide), main body of the snack, to go on top. I did not anticipate the result of warm chocolate in a plastic dish, in a microwave, even though I only set the timer for only 1 minute: 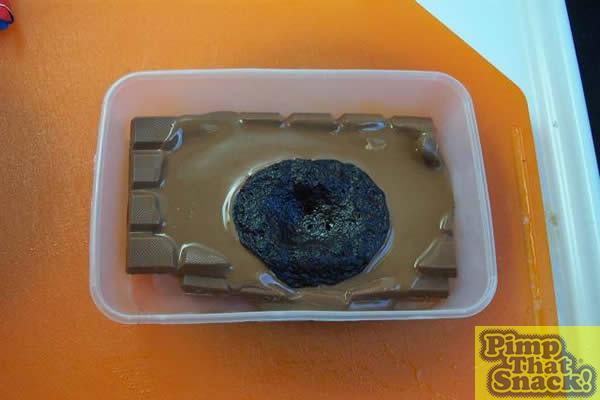 No, I haven’t crapped in it. That is a combination of beautiful milk chocolate and molten plastic. Picking this up out of the microwave hurt like hell and burned two of my fingers. Only five minutes in, I’ve wasted two bars of chocolate, caused injury and I have to start over. I hunt around the kitchen and find a Pyrex glass jug. Perfect. I melt the chocolate, and reconsider the plan. Unfortunately, the KitKat will no longer have a base rim, and will now be a solid block. 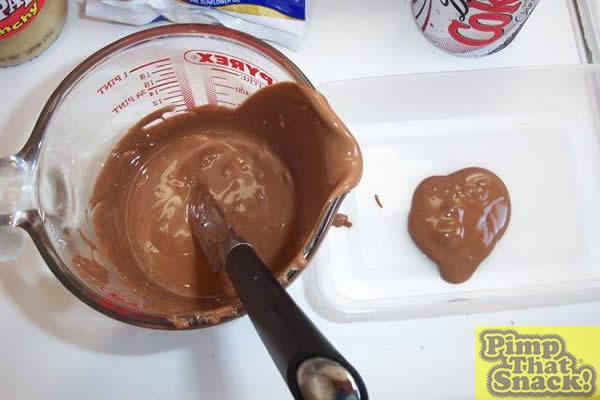 Upset by this folly, I comfort eat, with Seabrook crisps (the best crisps in the world and you can tell Gary Linekar I said that) and a can of Diet Cherry Coke, which is the soft drink of champions. 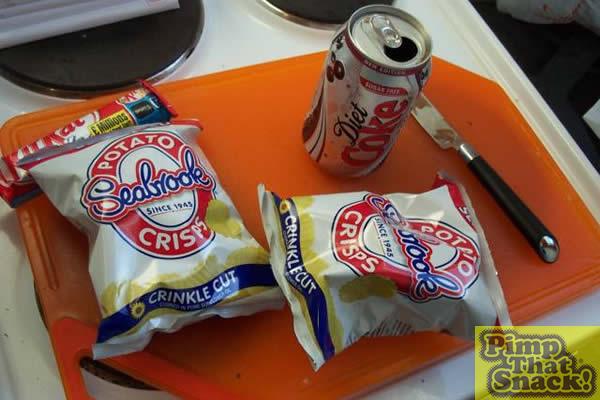 I pour the molten chocolate into the other plastic tray, to form what will eventually be the top of the Kitkat: 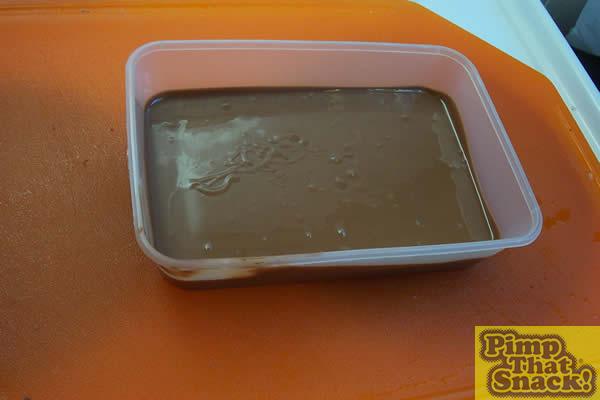 I stick this in the fridge for 20 minutes and let it harden. Once this is done, I use a knife to mark out where the wafers will go. 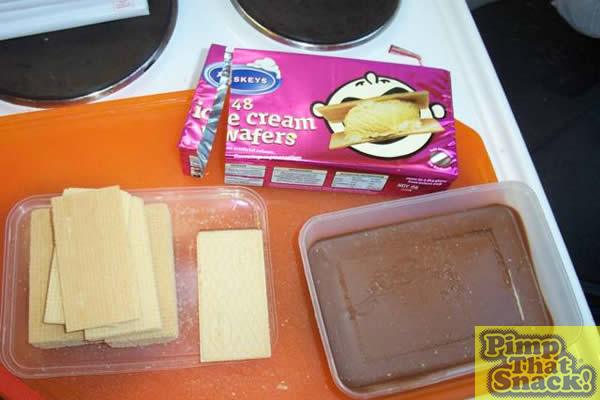 As it turns out, at this point, my digital camera decides to corrupt the photo I took of the peanut butter being added, suffice to say that in the rectangle I marked out, I spread this much peanut butter. 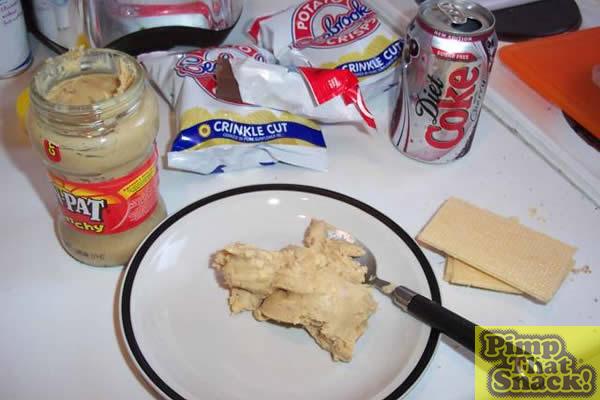 The peanut butter did not spread easily or consistently over the chocolate ‘lid’ and it’s for this reason that fellow snack-pimpers are advised to use the smooth variety. Also note that the peanut content of Sun-Pat is 12% higher than the supermarket own-brand that I almost chose. Lucky escape there!

The next step was to add a layer of wafer. This was the trickiest part of the whole thing, too much wafer would make a KitKat nothing more that a chocolate box of dust. I eventually added 4 layers. 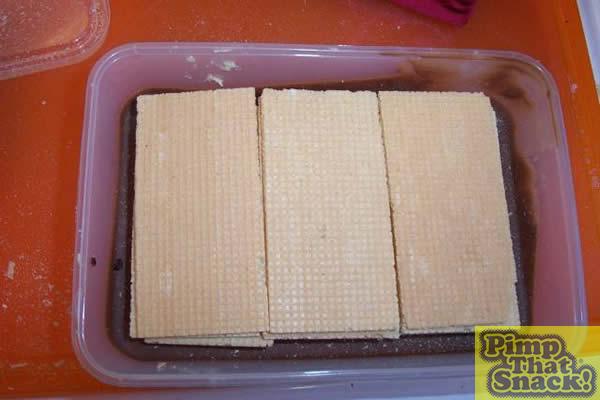 followed by a little side project called “Pimp My Wafer”, like this: 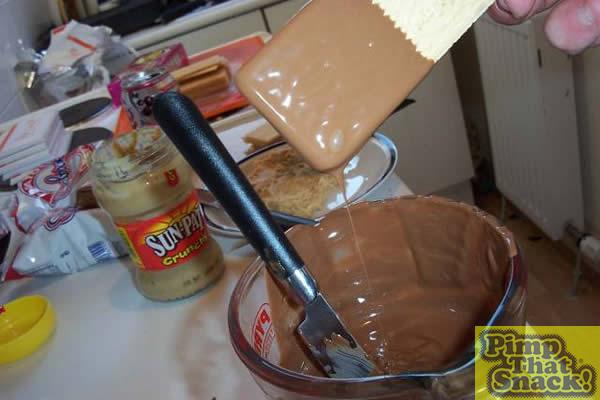 This tasted wonderful and made me realise that in this project, I could have something very special. The final step was to pour in a load more chocolate, and because of the mishap with the first plastic dish, I decided to fill to the brim: 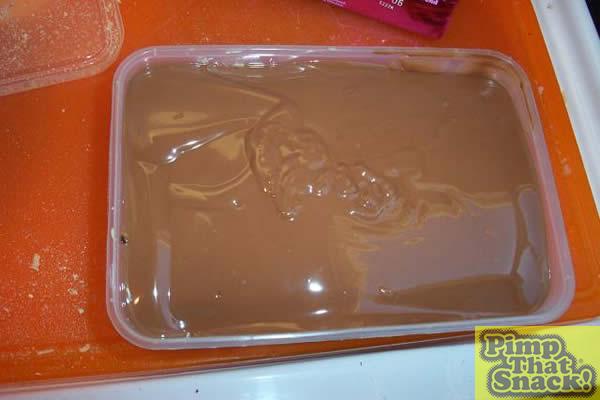 After this photo was taken, I poured in even more chocolate and smoothed over the top the best I could. This was then popped back into the freezer, and I came back to the computer to type this. So by now it should be finished, and It’s time to reveal….. 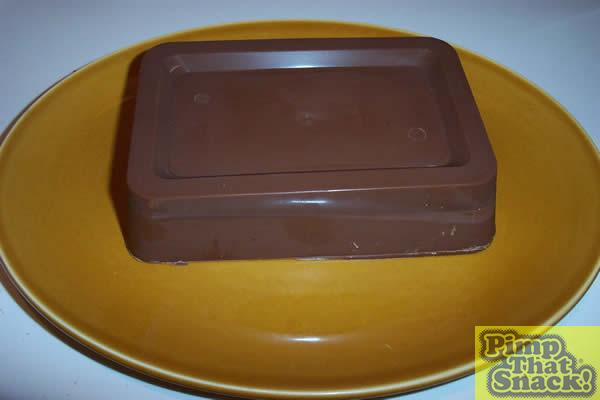 Is this the biggest KitKat Chunky in the world – I do hope so! It looks magnificent, and whilst I chickened out of writing “PimpThatSnack.com in chocolate dribbles on the top, I started to wonder how on earth this thing could be eaten. I should have realised. The chocolate is way too thick at the corners, but for a first attempt, it is something to be proud of, and to love.

Finally: The cross-section of this monster bar and comparison. 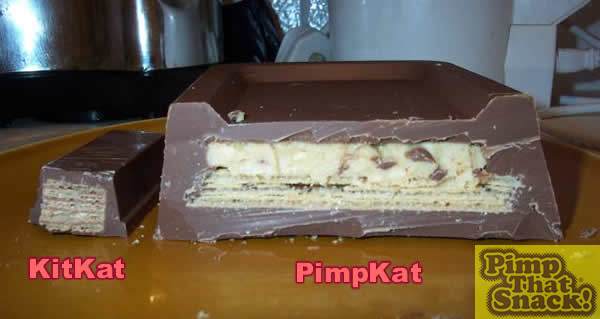