Surfing the site on Friday night my sister and I (hereafter referred to as
team pimp) got to talking about the direction in which our lives were going.
Shamed by the achievements of the pimping community we decided that our
happy family lives and thrusting careers counted for nothing – the only
thing to be done was to pimp our own lives back onto the tracks. But what
to pimp??? As first timers maybe we should’ve considered a simple pimp …..
but no …… in our desire to impress we opted for that icon of happy
European childhoods ….. the kinder egg …. ours would be a monster
weighing in at 2kg …… a whopping 100 times the weight of the original.

9 x kinder eggs ( 3 for photographic purposes, 6 for research and
consumption ) 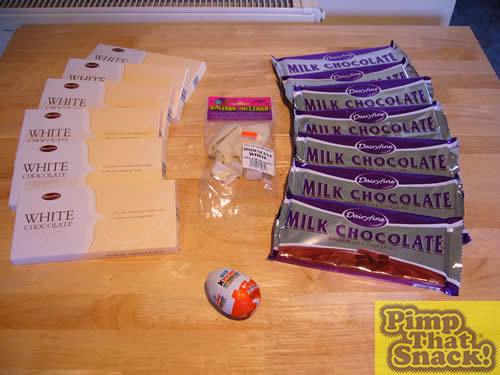 This was the research and development stage of the project. Following an
early explosion – which covered the pimp team and a 7 year old assistant in
hot white chocolate not to mention the kitchen/lab – we experimented with
ways in which to fill balloons that would avoid the risk of popping. We had
decided by this stage that the balloon was the way to go to achieve the egg
shape and attempted filling several from the multipack with the following;
expanding foam (expensive, smelly, ruins your clothing, damages the lawn and
doesn’t work), sand, flour, sugar, beans from child’s beanbag (very sensual
but again doesn’t work). Having exhausted all of the above we decided to
take a calculated risk and allow the chocolate to cool more thoroughly
before dribbling over air inflated balloon. 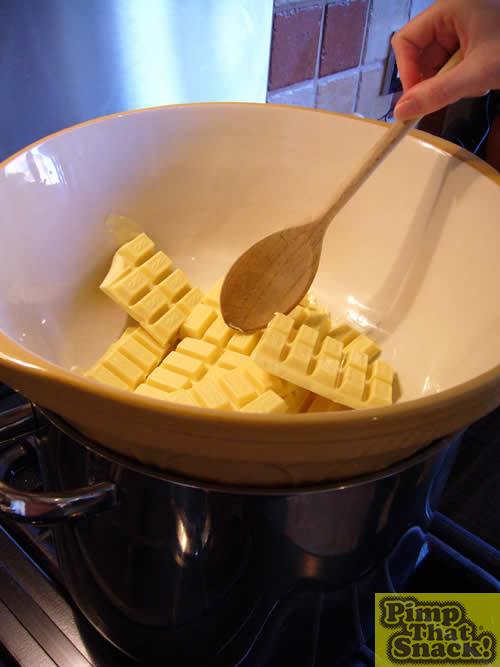 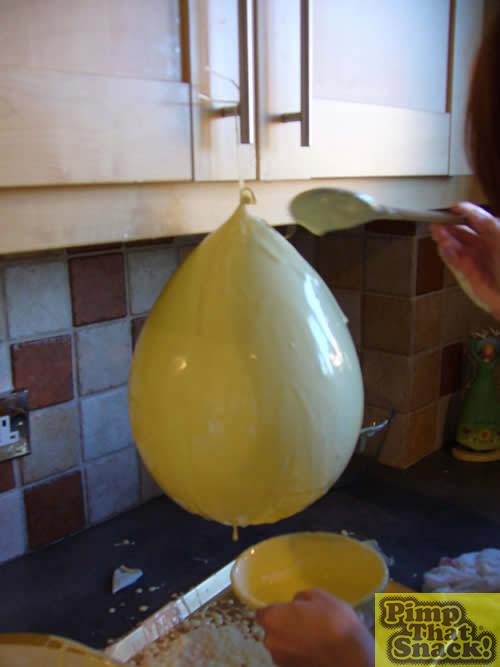 Having suspended balloon from kitchen cupboards by string we built up layers
of white chocolate using the dribbling method and left to cool and harden.

With the white chocolate now hardened we repeated process with the brown
milk chocolate. The dribbling process was less satisfying with the brown
chocolate and the team found it went a bit gloopy as it dribbled from the
top to the bottom. We attempted to smooth manually but this proved
fruitless. 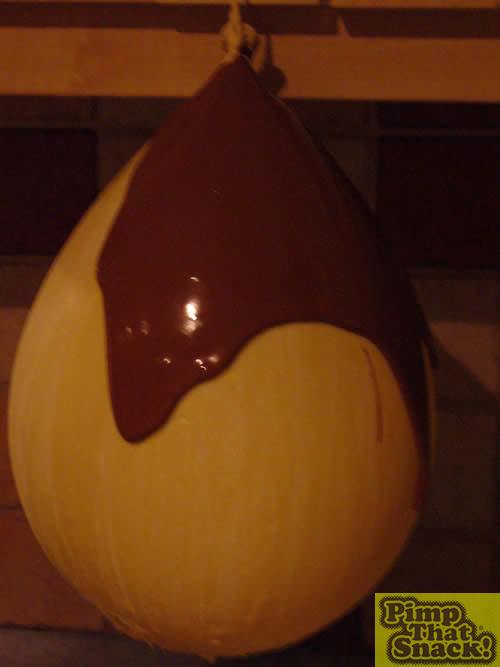 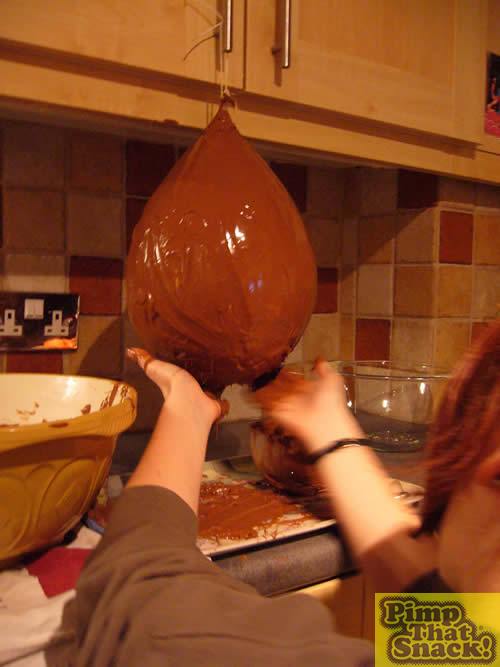 Meanwhile in another room …… a member of the pimp team (who wishes to
remain anonymous) set about redrawing a flattened out kinder wrapper on
Illustrator. This was printed out in 15 sections on A4 paper and pieced
together jigsaw fashion with sellotape. 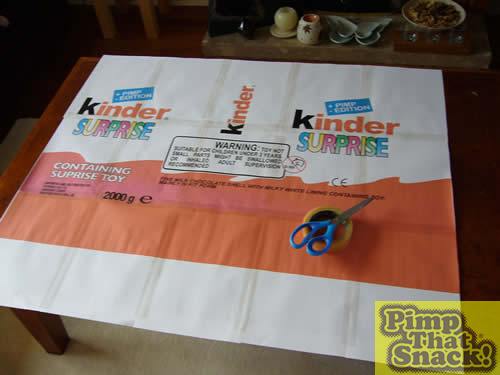 After a sleepless night the pimp team had an early start and cut down the
now hard dried two layer kinder. With some caution the airfilled confection
was taken out into the garden and set down carefully. Following the
explosion of the previous day the egg was approached with caution and the
protruding rubber of the balloon pierced very slightly to allow a slow and
steady release of the air inside. Once risk of explosion had passed and the
device had been rendered harmless it was returned to the kitchen/lab and a
hot blade was passed through it’s two layered shell slicing the two tone
construction into two perfect halves. 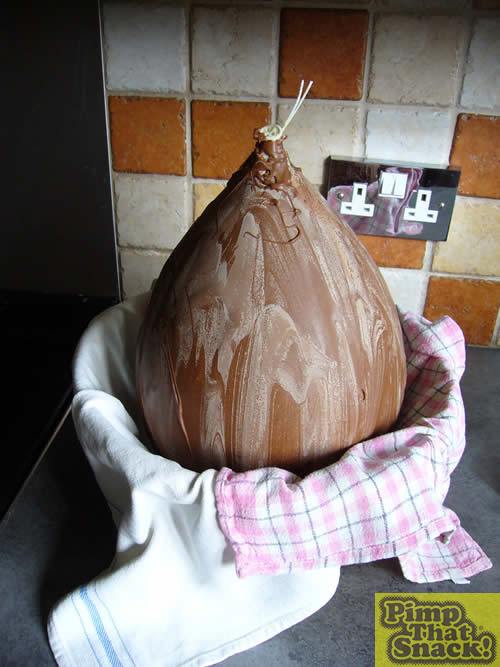 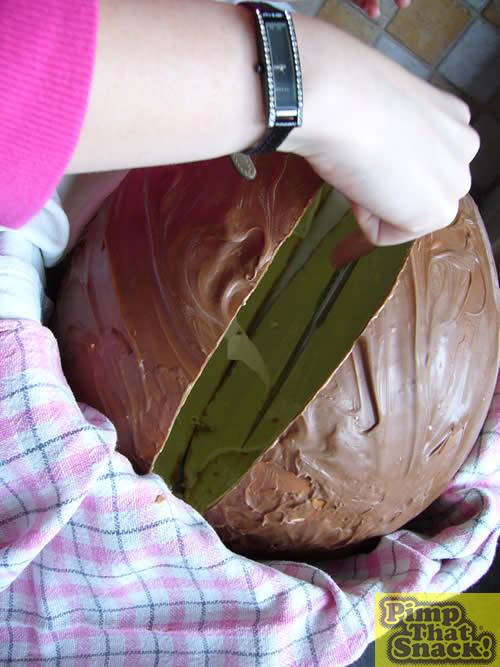 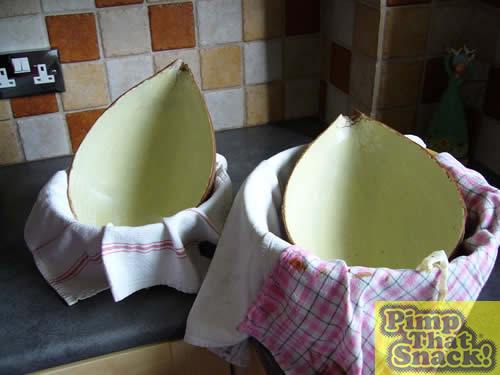 Now in two the obscene kinder was worked on by the team pimp technicians
who, to the detriment of their manicure, peeled the last of the balloon from
the inner white chocolate layer. Once the inner was picked clean hot spoons
were used to partially melt and reshape the top of the construction to
acheive a more authentic egg shape and neaten the cut edges. The job was
done. The gargantuan snack was then posed and photographed next to it’s
smaller and less impressive cousin then carefully dressed and accessorised
with a replica surprise toy that had been encapsulated in a butchered
lemonade bottle. 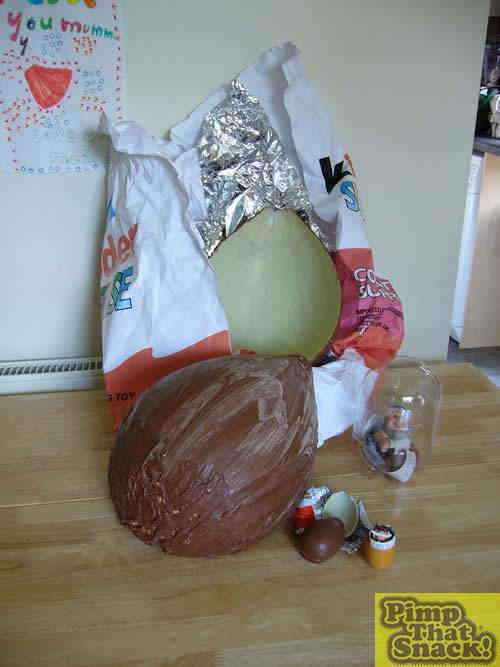 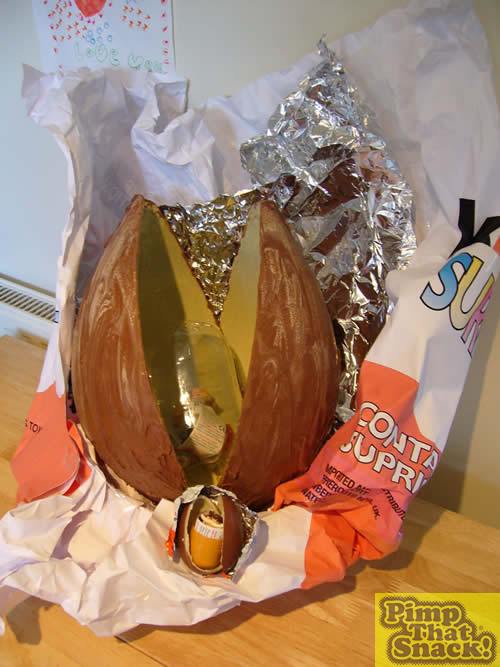 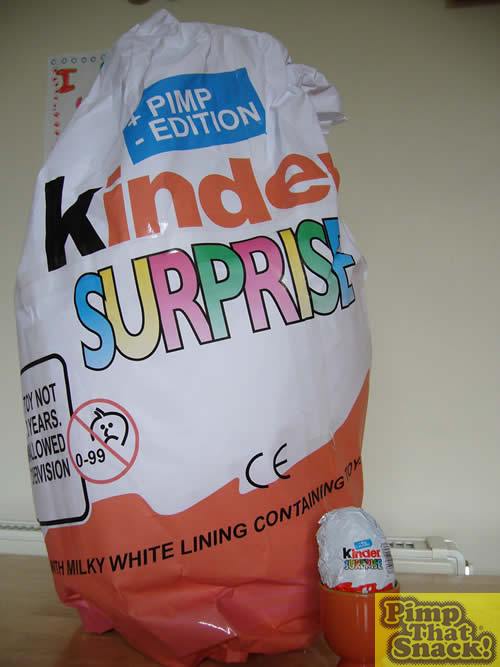 The team debriefed and discussed at length the outcome of the project.
There was some disappointment that the outer shell was a bit knobbly and had
no shine (a web search and a phone call to our dad revealed that the melting
temperature of chocolate is crucial to the appearance of the finished
confection) ((we weren’t to know)) and we were cross that we had ruined the
lawn with spray filler foam. We were however delighted that in both taste
and texture our colossal pimp was as delicious as the original and the
surprise toy was as thoroughly disappointing as one might expect from a shop
bought egg. During the antiques roadshow the team ate and enjoyed a full
half a shell – yum.