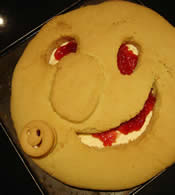 Happy Faces
by Ciara Stevens for £6.00

Getting the circles onto greased baking trays was more tricky, repeat: LOTS of flour required! Then on side we tried to recreate the strange face that appears on the happy face biscuit using a skewer to mark out the lines before cutting them out with a knife. Then it was into the oven (180 degrees for 25 minutes) which undid some of our hard work as the mix expanded into the holes we had cut. A quick trim with the knife restored them to their former glory.

Now it is assembly time! But we had run out of time for the day due to our hectic social schedules, so all parts of the pimp were left in the fridge overnight.this interlude turned out to be a mistake when I managed to create a huge crack in the top biscuit the next day, disaster!

But we pressed on as best we could. For the centre we used some seedless raspberry jam and some buttercream stuff we made from 250g of butter and a kilo of icing sugar.

There was too much of it but its sooo tasty that it can just be munched as a snack (if you aren't diabetic!). The jam and cream is used to create the details on the eyes and mouth as well as stick the two halves together.

Tastes pretty damn good to be honest, especially the middle bit. Time for a slice of happy face and a cup of tea I think. Not bad for our first pimp, now we need to find something else to pimp to the max! 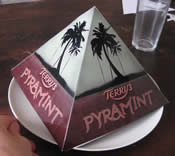