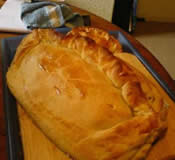 Giant Pasty
by Cat Firman and Chris Dalrymple for £10.94

1. Assemble the ingredients. We went with the following:

2. The first step is to chop like an absolute mother - for the ultimate in authenticity, ensure you are chopping to scale, and to the correct shape. The last thing we wanted would be a massive cornish with miniature ingredients. That would just be silly.

Cat didn't want to her hands to smell of onion so she used gloves. It's a fetish thing I think.

3. Then you need to roll out that pastry - we needed to make sure it was thin enough to cover the ingredients, but thick enough to hold back the might of the meaty filling within. This involved rolling out each individual pack of shortcrust (we were feeling lazy so we brough pre-made stuff), then joining them together on as large a surface as we could find.

We found a kind of oval shape worked best.

4. To avoid the inevitable bouts of chronic diarrhoea from undercooked meaty goodness, we decided to cook the filling first.

The onions were nicely browned and in went the mince and other veg (including peas - don't forget to add peas ferchristsakes. We nearly did. Oh how we laughed). 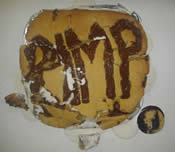 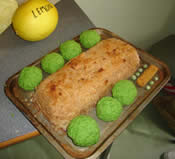