Avast ye mateys! To the stern she blows!

Late one night on the tube a strumpet of our acquaintance was giving us a full broadside about our cooking skills. As a challenge, and due to a complete obsession with sailing ships, we proclaimed that for her birthday in two weeks there would be present the most massive and impressive birthday cake she had ever seen, in the shape of an 18th century frigate. A few days later, a friend pointed us at this website. It was fated.

Much experimentation had to be done. The first problem was the mast, which called for something pretty solid, but of course edible. A quick trip to the sweet shop brought home some ‘cables’ – very long and thick coloured cylinders however a bit on the floppy side. How to harden them? In the true spirit of scientific enquiry we put one in the freezer, and one in the oven on low heat, to see what would happen. 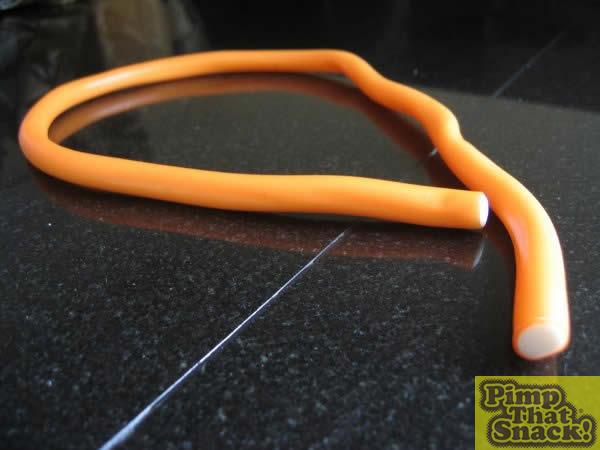 The freezer – the cable went hard for a bit but thawed out pretty quickly. Not a success.
The oven – on low heat the cable melted into one big sticky gooey mess. Despite the first mate pointing out that after we had scraped the muck out of the oven it was, in fact, much harder, the phrase ‘unmitigated disaster’ could still be heard.

Idea two – solid chocolate! Back to the sweet shop for some of Cadbury’s finest. Now, what to use as a mould? A genius purchase in Sainsbury’s held promise – a Â£2.99 plastic cricket set, containing three hollow plastic cricket stumps! 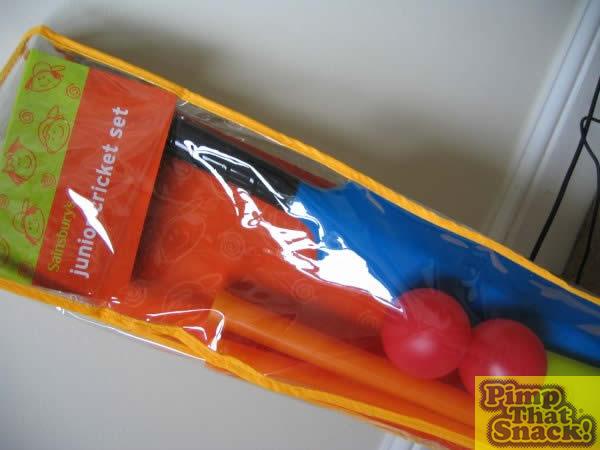 Cut one end of stump. Melt chocolate, taking careful note of the bowl-in-the-pot-of-water technique perfected on this site. pour into stump. Have celebratory drink and retire. Ignore suggestions from first mate’s girlfriend who pointed out that getting solid chocolate mast out of the mould may be a problem, and make bet regarding likely success. 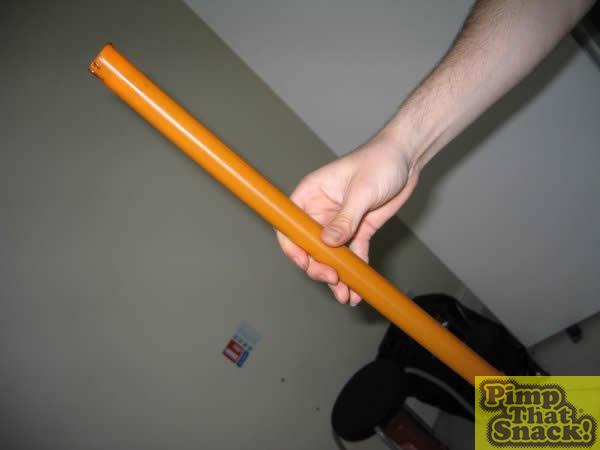 Next morning – first mate owes girlfriend five pounds. The cutting out expedition is an unmitigated disaster – neither the pouring-hot-water-over-it idea or the cutting-away-the-mould idea prevented the result looking remarkably like the lower digestive tract. Morale takes a blow but the fighting spirit lives on. Back to the drawing board.

Revelation – when at first you don’t succeed, cheat. Decide that the final masts shall be the original cables, with bamboo sticks shoved up them to give rigidity. One day to go – time to get cracking! A last trip to the sweet store for truly enormous bag of sweets containing cables, licorice ropes, licorice cannons, and various sea creatures.

Victoria sponge is decided on as the cake of choice. First mate retrieves ingredients, cake tins, etc and proceeds to mix up a storm. 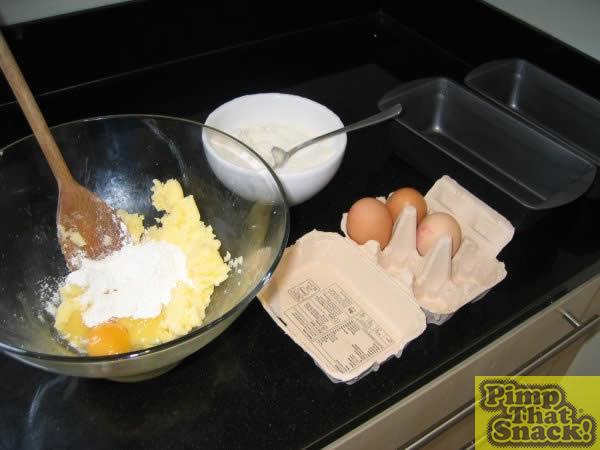 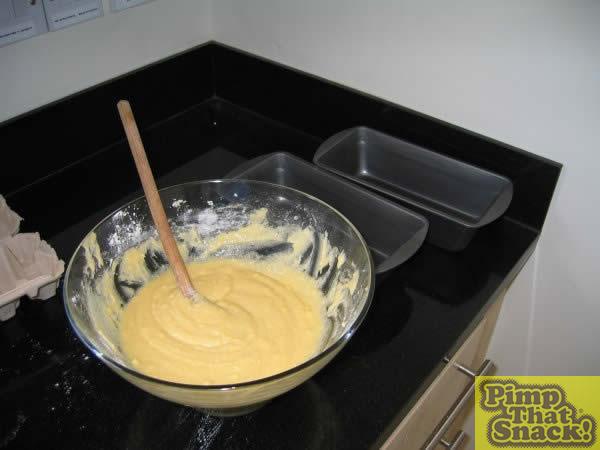 The Captain, who isn’t present, hears reports about cakes not coming out of tins in one piece and impending disaster.

First mate recovers with yet another trip to Sainsbury’s, purchasing several premade madeira cakes. Our cooking reputation takes another blow.

Cake shaping – check! Various jams used as universal glue. A picture of HMS Victory is used as the template. 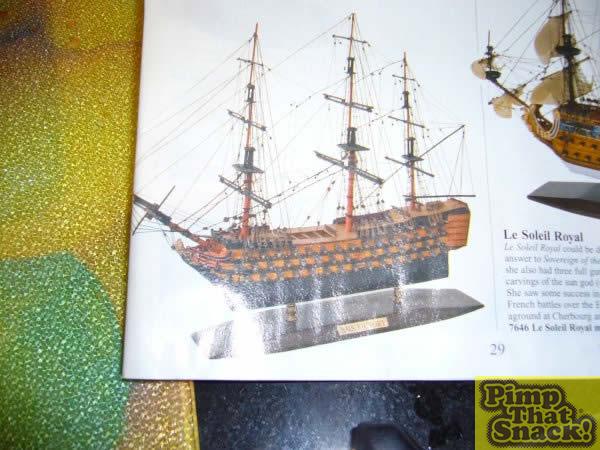 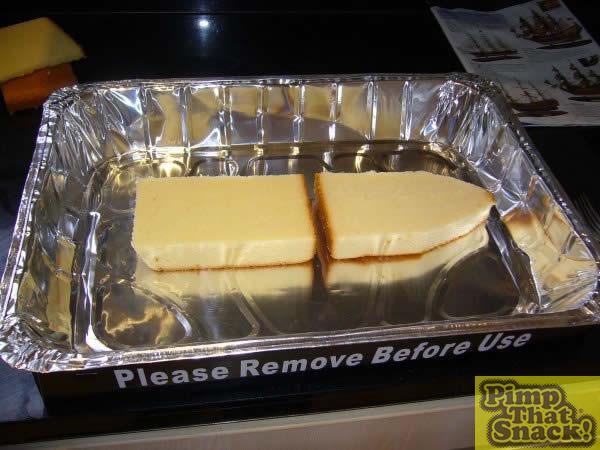 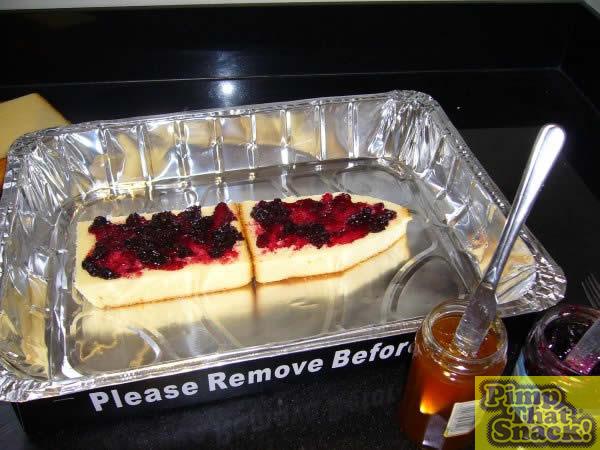 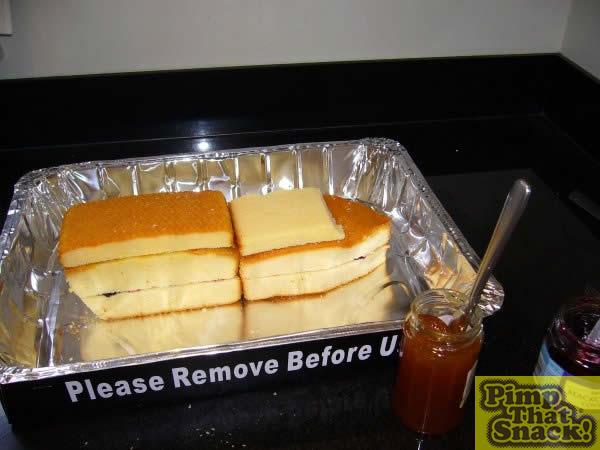 Premade icing is used for the ‘Nelson Chequer’ colour scheme. First, on goes the black. Roll icing. Apply glue liberally. Stick on and pat down. Check!

Capain arrives and begins preparation of the rigging. The masts are created and then spars are attached using licorice rope. 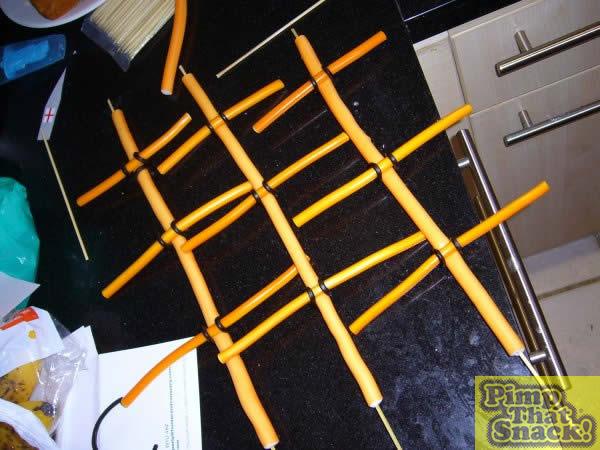 Meanwhile, the first mate is putting the yellow racing stripes on. Makes it go faster! 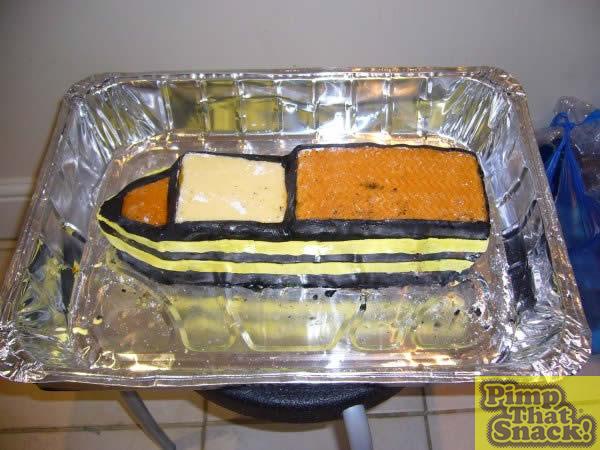 A suitable implement is needed to make cannon shaped holes in the side of the ship – a pen is sacrificed for the greater good and the ship starts to get some armament. 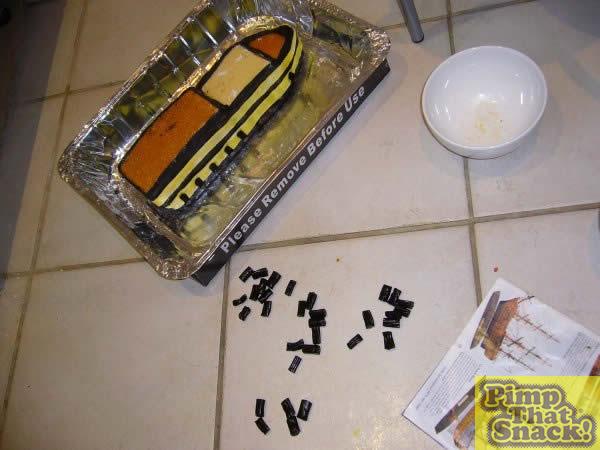 The tray used was another genius purchase, again Â£2.99, this time for a disposable barbeque set. The coal, etc is taken out and put away in case we ever need to black up. The cannons are completed, and with a bit more icing the frigate is looking mighty fine. 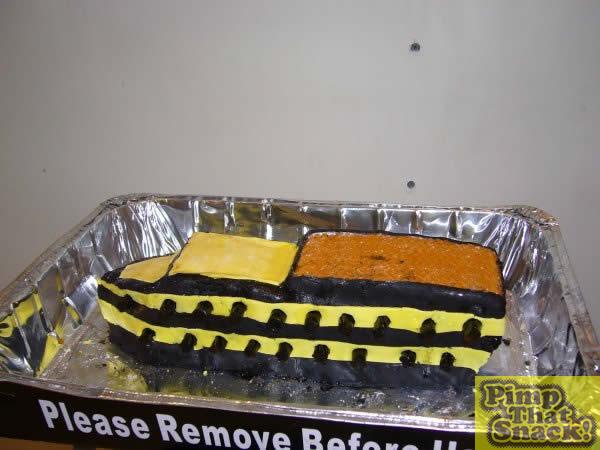 The captain is working furiously on the masts, figuring out how to attach rice paper sails to the spars using licorice. After a bit of trial and error the mizzen mast is completed. 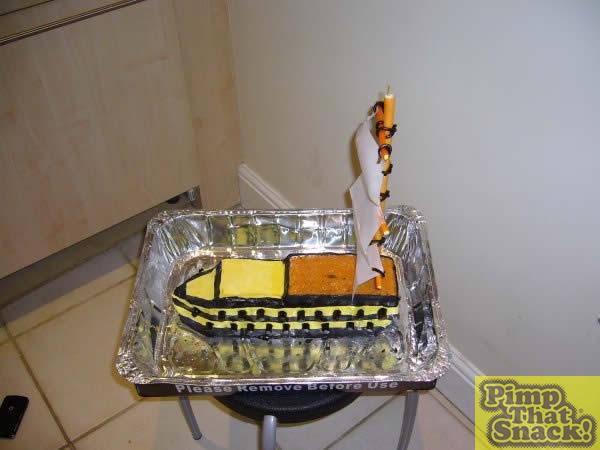 The captain’s sail creation technique improves, and eventually all of the square sails are complete, and the masts are in place! The bowsprit is jammed on, and it’s time to splice the main brace! The licorice rope is run across the top of all the masts.

The first mate sets to work applying a previously made huge bowl of green jelly for the sea, while the captain finishes off the sails with a jib and a spanker. 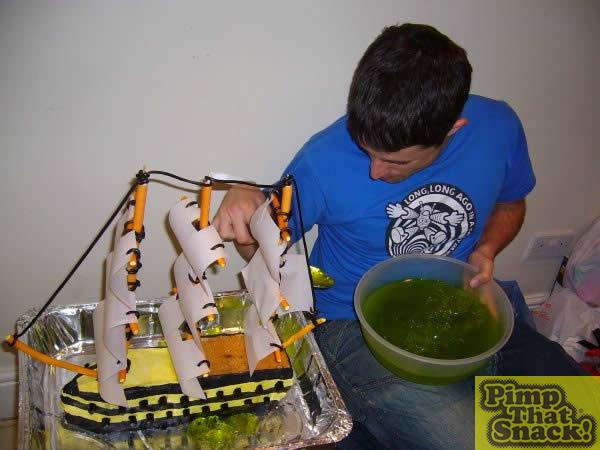 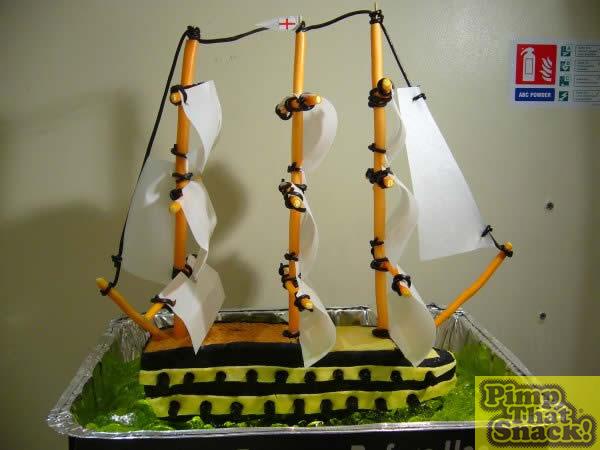 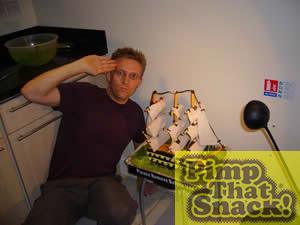 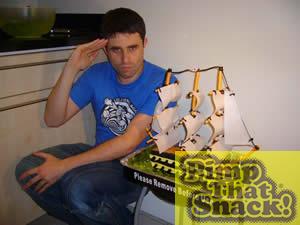 After extremely carefully carrying the ship through Camden to the original strumpet’s house, we receive our just desserts… 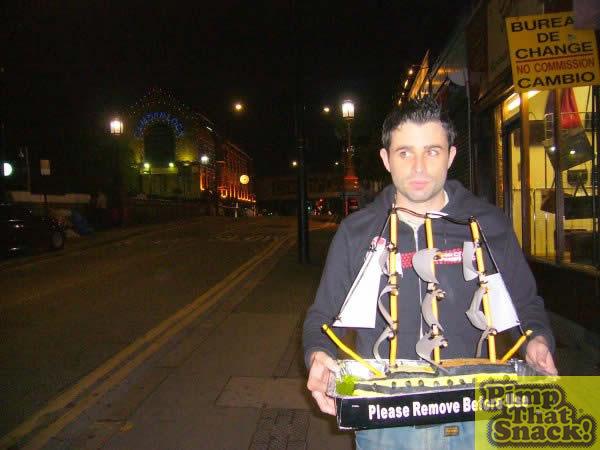 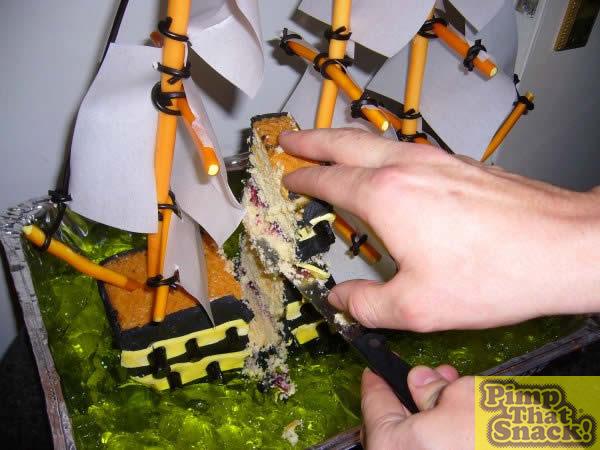 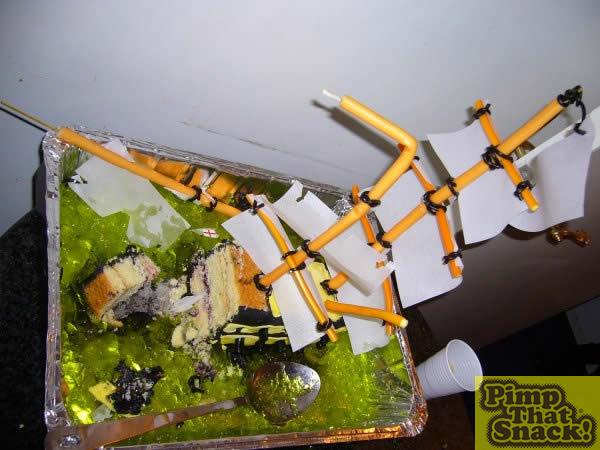