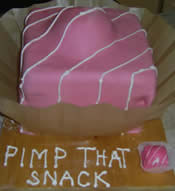 French Fancy
by Claire Inman and Sophie Petherbridge for £24.19

The cake with a hump!

When we looked at the original french fancy we noticed that the pipe work on the top had to be the right size so we paid attention to this as well as the proportions of the cake in relation to its sides and volume.We are both cake monsters and couldn't wait to eat this cube of wonder.It was a labour of love and took 5 hours to make!

We made up 4 batches of cake mixture each containing 8oz of sugar, self raising flour, margarine and 4 eggs.

Step 3
We poured 2 batches of the cake mixture into each tin and smoothed it out then baked the cakes for 50 minutes on the middle shelf.

Step 4
We removed the cakes from the oven and let them cool for an hour. In the meantime mainly because we were bored, we made the butter cream for the top with one pack of butter, some vanilla essence and lots of icing sugar.It took a lot of beating to create that light texture you get in the manufactured cake.

Step5
Making the fondant icing was straight forward as we bought some pre made fondant icing and added enough red food colouring to create the right kind of pink.This was then rolled out on cling film and after 10 minutes of rolling phew! we were ready for the essembly!

We cut the cake so that it resembled squares of equal measurements with a ruler. Then place them on top of eachother adding a little butter cream in between to alllow for stability.Then a large blob of butter cream was placed in the middle of the square and shaped into a dome.With the left over butter cream we covered the cake with it and then placed the fondant carefully over the top and removed the cling film.

Step 7
We then over lapped the fondant at the bottom to cover any patches. We then made a royal icing from 1 egg white, a teaspoon of glycerine, tbsp of lemon juice and lots of icing sugar to make the icing stiff. by this stage we were very tired so we took turns beating the icing and having frequent tea breaks.

To make the stripes in proportion with the cake we changed the piping nozzle from a no1 nozzle to a no4 nozzle and made a paper bag for the icing. As it needed a steady hand I took my time. pressure!!!!!!

To make the paper casing we looked at the original and realised that it curved down each side so we added this feature, pleated the sides and carefully fitted it around the cake.

Voila!
A cake with a hump, well a lot of butter cream. Definately not one for the faint hearted.