Freeze it, and when it’s nice and hard, you can start layering on the wafers. Press them ‘Way Down’, or they’ll fall out later on.

Once the wafers are in position, you can pour the rest of the chocolate around the sides and over the top until it’s completely covered. Be careful with it though, or you might get some ‘Stuck on You’. When that’s finished, and it’s frozen, then get ready, cause ‘It’s Now or Never’ – turn the loaf tin upside down, rub your hands all over the base, and hopefully it’ll fall out. Mine wouldn’t ‘Surrender’, and had to be coaxed out with a knife around the edges. So, now it’s just a big chunk of pink – not really good enough for the king is it? Even ‘A Fool Such As I’ can see that. So get yourself some nice icing, and sort the top out. Adorn with a Hawaiian lei if you have one (funnily enough I do) – the King certainly filmed a lot over there, so he’d probably approve. 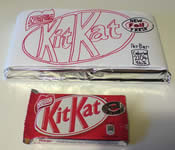 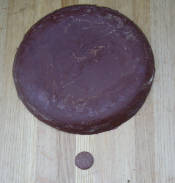