What follows is the story of 2 pimps first ever project. It’s a tale of ups and downs, highs lows, too many wafers and not enough chocolate. Welcome, my most pimping of friends, to the El Diablo Drifter!

It started on a boring bank holiday afternoon, when suddenly we saw a Drifter bar in a kitchen cupboard… well what else could we do? We had to pimp it!

4 bars of Fair Trade Chocolate (for the ethical pimp) (note: this wasn’t really enough chocolate. We learned that the hard way!)
2 bags of Butter Toffee
1 jar of chocolate spread
2 packs of Pink Wafers (extra colour for extra pimp-points) (note: this was actually too much! Well, you pimp, you learn, right?) 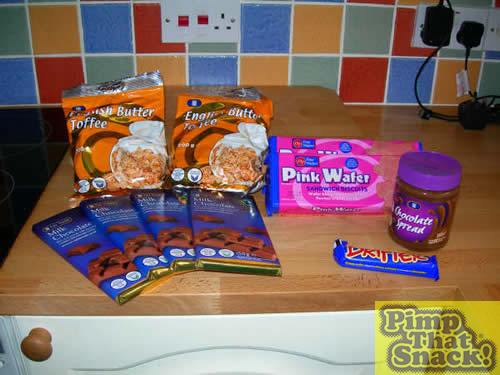 With our ingredients ready, the pimping began. Prefering the old fashioned method to possible radio-active scolding from the microwave, we set about melting the chocolate in a pyrex bowl in boiling water.

Then, picking out the perfect sized dish, we poured the chocolate in with the aid of our trusty wooden spoon!
For a quick set, we placed it in the freezer. It was about this point that we realised it would have been a good idea to put grease proof paper in the dish so we could get it out later… Oh well, we could worry about that later! 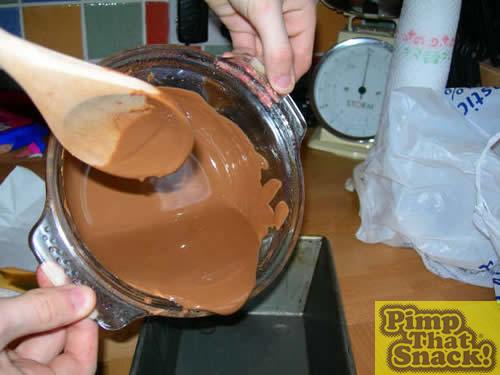 Now came the arduous task of melting the toffee. Using the same method as we used to melt the chocolate, we paced the toffees in a dish in boiling water. We must have stood watching those toffees not melt for at least 10 minutes wondering why nothing was happening, when Woody’s brother pointed out that the hob was turned off. Boy, did we feel stupid! 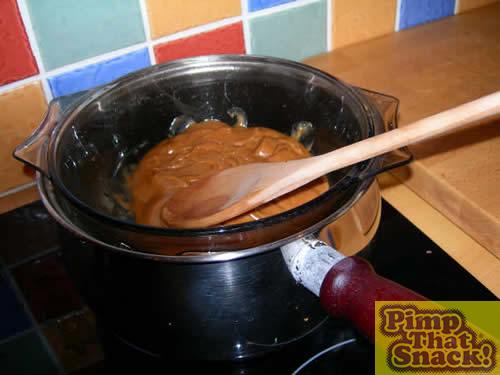 After it had finally melted, we poured it on to our now nicely set chocolate, hoping that it wouldn’t melt it.

Next came the wafer part of this pimped out Drifter. Using the chocolate spread as a kind of delicious cement, we stuck together all the wafers (well, all the ones that hadn’t been eaten by a certian fellow pimp!) together into a crumbly pink brick.

Once the brick was finished, it completly fell apart. But it was stuck back together with yet more chocolate spread, and placed in the dish with the chocolate and toffee. 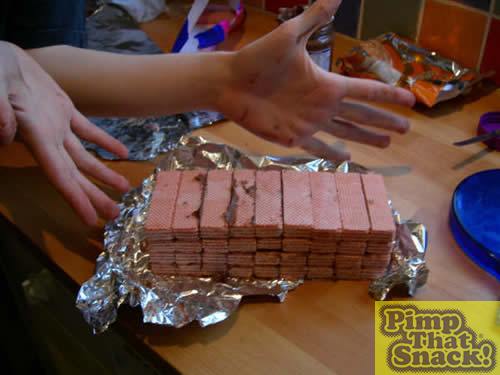 What was left of the chocolate was melted down and poured in to create the walls of this mega chocolate bar. But disaster struck, it wasn’t nearly enough chocolate! In order to to save the pimp, 2 layers of the wafer brick had to be removed… what a shame.

Thinking quickly, we melted down every scrap of chocolate we had with penty of chocolate spread and poured it in, creating what looked like a chocolaty vision of hell… 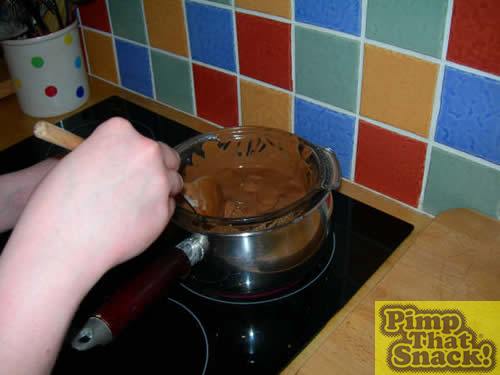 After another quick set, my pimping comrade bought some more chocolate, melted it down and, after a surprisingly easy struggle to get the chocolate out of the tin (he heated the bottom with warm water) gave the bar its nice wavy look. The beast was complete! 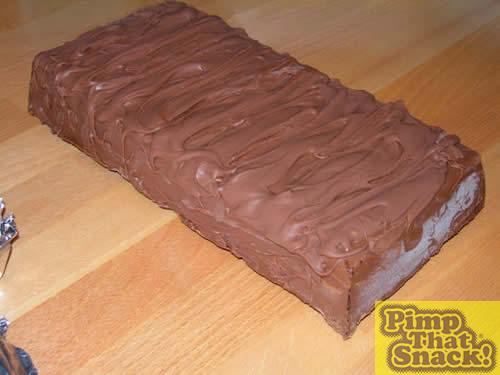 With great difficulty, it was cut in half, giving us the perfect opertunity for the obligitary cross section photo! 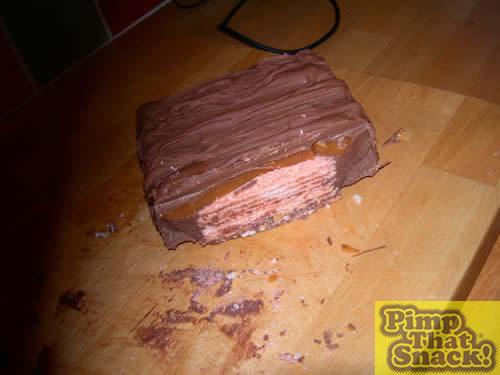 It’s a monster of a snak a requires a very sharp knife and a mallet to cut! But the chocolaty goodness is worth the effort!

Callories: Enough to feed a starving village for several months.