While writing up this project I’ve recruited the smooth tunes of The Ending Of to help get me through this harrowing tale of ambition, disaster, and partial recovery.

The business of trying to extract the fondant from 30 eggs is not even funny. It takes absolutely ages and is unbelievably sticky, added to the fact that creme eggs weren’t designed to be split neaty in half and more often than not imploded when poked with a knife.

Blood, spit, an hour later, and we’re getting somewhere. 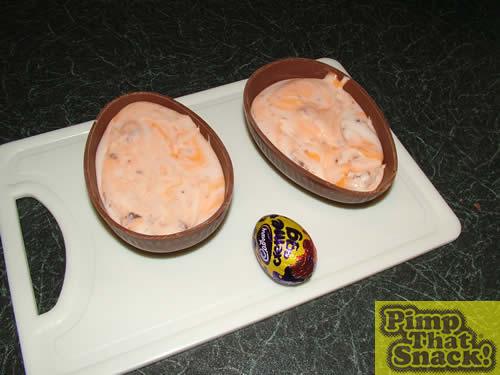 Looks good right? For those that would complain that the white and yellow insides have been mixed up, I really must advise you to try it yourself , because getting the stuff out to start with is such a pain you don’t even think about trying to seperate the white and yellow. I wished more than once I had access to a creme egg factory for 5 minutes. 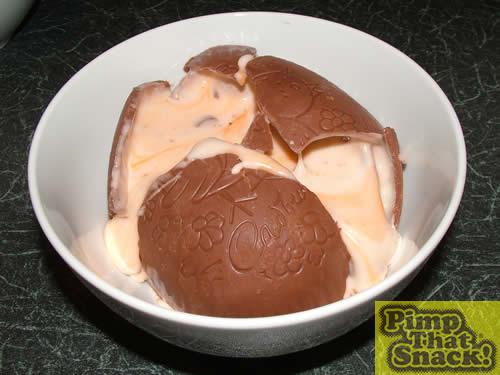 Many, many profanities were uttered when it turned out the larger creme egg shell was unable to actually support the weight of all that fondant for more than 10 seconds before collapsing inwards. I’ve just spent an hour messing about with this sticky gunk and I’m extremely unhappy.

The melting of the chocolate shells wasn’t going well either. 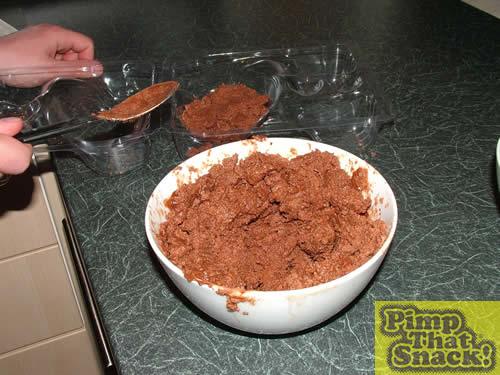 I don’t care what you say, Cadburys chocolate really can’t be melted well regardless of the method used. Despite being carefully suspended in a bowl of boiling water this just mushed up into a crap goo not even vaguely approaching melted chocolate.

So, I’m not terribly happy, as both pimps have just completed failed and I’ve wasted an hour. But, the pimpdaddy doesn’t give up, and strikes upon a new idea. 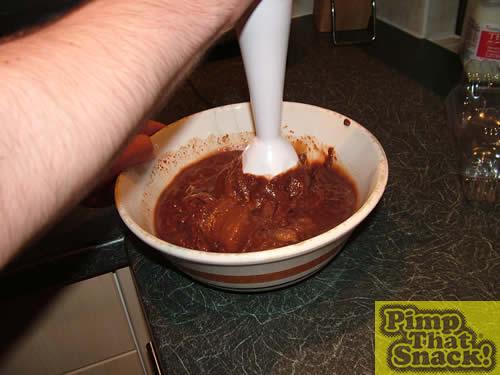 Once done, erm, well, chuck it into the large egg container I suppose. Bear in mind at this point I don’t really know what I’m doing. 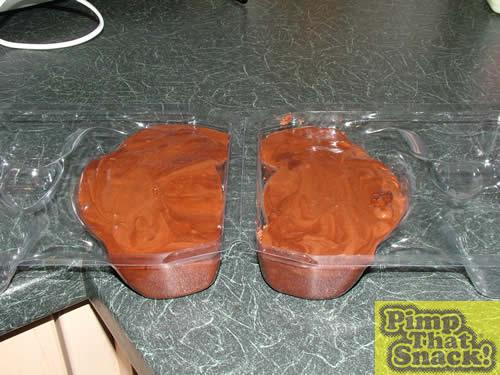 And now, erm, I suppose, we’ll chuck a couple of normal creme eggs in there for fun. 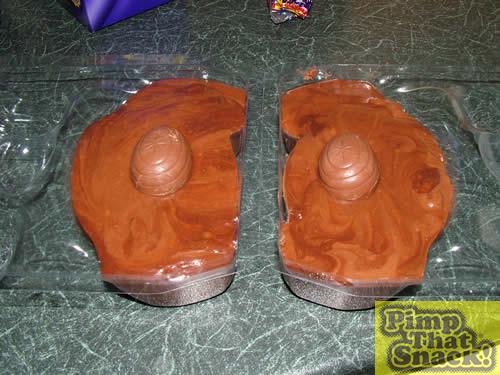 Once the eggs were submerged, I threw the whole lot in the freezer. Ok, that’s one insane pimp probably on the way. Back to the bowl full of chocolate and fondant I’ve still got left. 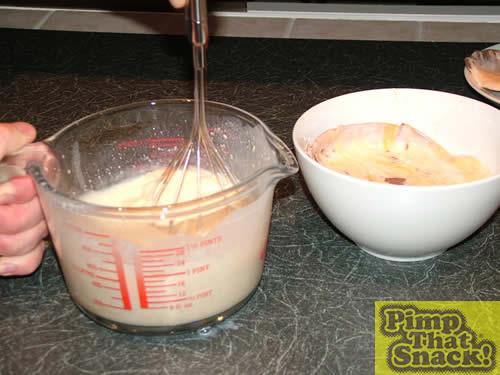 This looks suspiciously like a pyrex full of pancake batter. 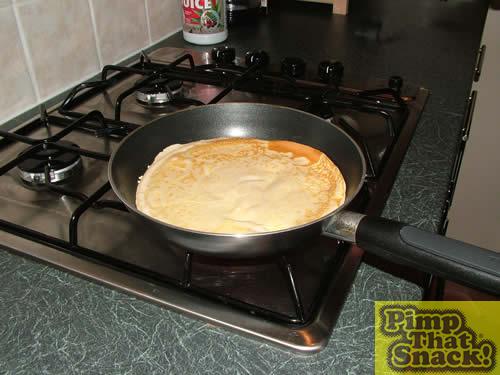 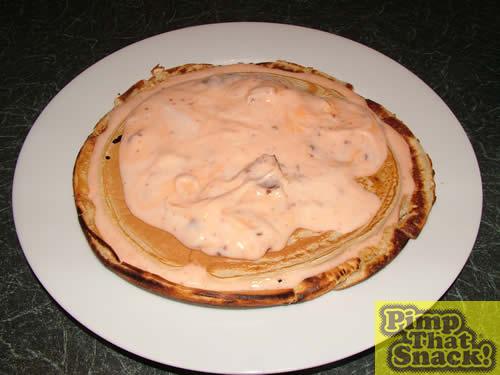 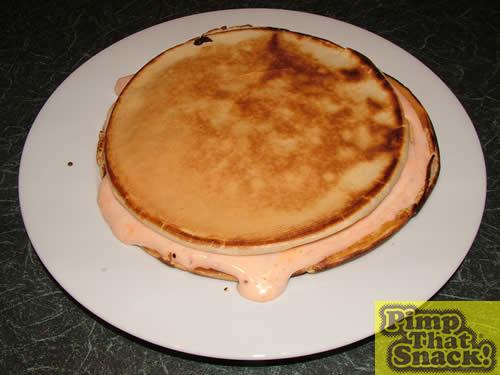 Three layers! It’s also starting to ooze, so I have to work fast. 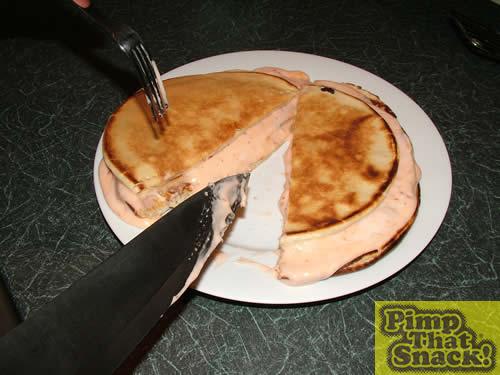 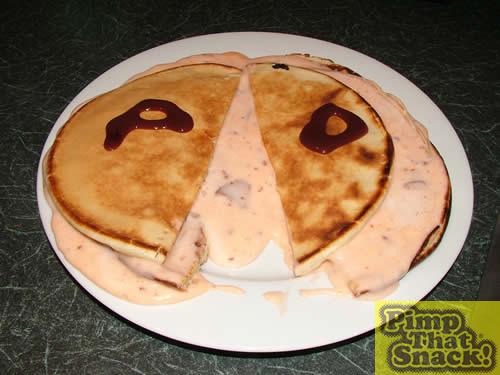 Looks, erm, yummy no? After a couple of hearty mouthfuls of this, I choke half to death. Its like adding a syrup thats such unbelievably pure sweetness that it makes you want to gag, and I did. Still, the pancake element was really quite nice.

Also a quick warning, do not leave the Creme Egg Pancake to congeal for a couple of hours, or it’ll look like this. 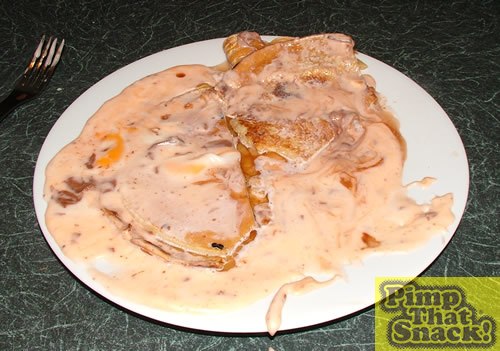 Ok, back to the other, unnamed pimp. After being frozen for a couple of hours its ready to come out. Suffice to say the chocolate, having mutated it with additives, has not set properly so again its vaguely cake-like and near-impossible to remove from the mould. 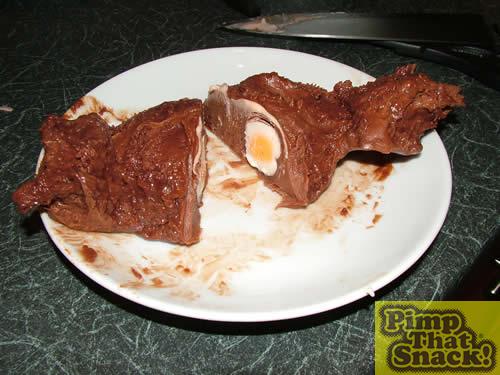 And there we have it. The Giant Creme Egg turned into hell on a pancake, and the solid chocolate egg is not at all egg-shaped, is a sloppy mess, but is extremely tasty and the creme egg in the middle is, I think, a nice touch.

Moral of the story: No pimp is ever truly a failure, just do something equally derranged with it instead.