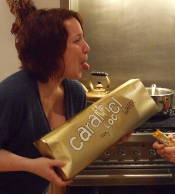 The hardest part was procuring a teeny weenie original to copy – do these things sell below the border? Many minions were dispatched to the land of porridge and The Proclaimers – and lo – a triumphant minion returned bearing the bounty we desired. The pimping was ON! Firstly – caramel – following a time honoured traditional Scottish recipe – ta Bec’s mum, we made a whole saucepan of caramel. We had a slight issue – the wrong kind of milk had been purchased, curse Becky and her short term memory. Onwards we soldiered over a hot cauldron thickening the cursed runny evaporated milk. We stirred for ages looking like the Witches from that Scottish play (minus one) and eventually our hocus-pocus was rewarded. The caramel was ready. We let the caramel cool slightly whilst we set about creating the wafer centre – a simple wafer caramel sandwich. We decided to use an overlaying technique to provide structural integrity. Much gluing later our tempting wafer centre was complete. We gave the whole creation a few minutes to cool down and stick together as we were worried it may fall apart as we turned it. A fear that turned out to be well founded – nothing that some more caramel couldn’t overcome, mind. Frankenstein’s Tunnock’s inspired monster lived.