I witnessed the Great Gummi Project (http://www.flickr.com/photos/pheadlessg/sets/999174/) a few years ago, and was inspired. It was a grandiose project, don’t get me wrong, but I figured I could do better. Here is my attempt.

Start out with a bag of the very best gummis, Black Forest, of course. I’ve tried this before (on a much smaller scale) with knock-off gummis, and it just wasn’t the same. 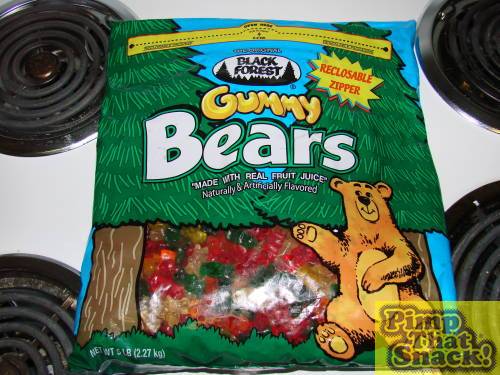 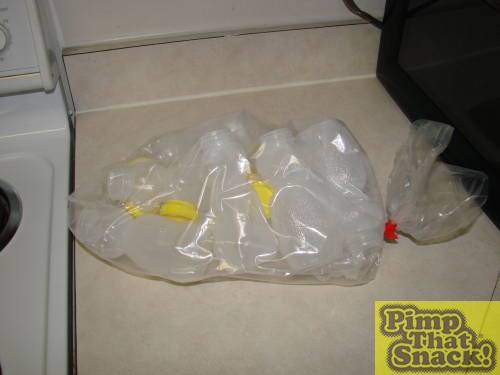 Here I’ve taken them out of the bag and put the lids on. There they stand, like Terra Cotta Soldiers awaiting their grisly loads. 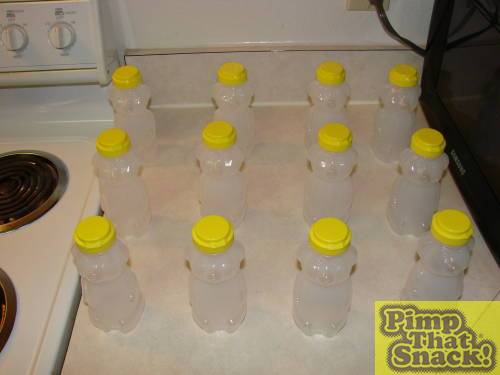 The whole process is pretty simple, if a bit time consuming. Here’s the entire contents of a 5 pound bag of Gummi Bears. Kind of mesmerizing, isn’t it? 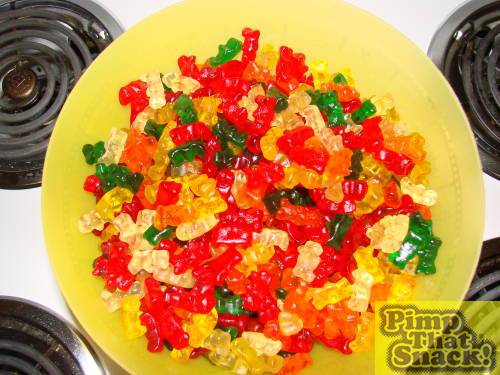 The next step is to start sorting. Once again, not too high on the difficulty scale, but it’s a time-waster.

I didn’t find too much in the way of mutated gummis (we’ll see them in a later picture), but I did notice this little fella. He stuck out like a sore thumb, all lime green while all his compatriots were dark green. I nicknamed him "Powder", after the film character of the same name, since he appeared to be an albino gummi. He failed to exhibit any telekinetic powers like his namesake, unfortunately. 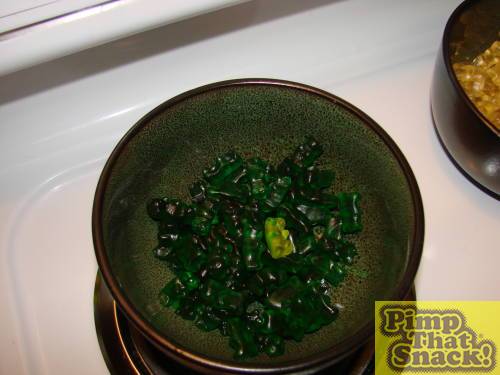 Powder just sort of kept looking at me the whole time I was sorting gummis, and I started to find myself growing attached to the little guy. Still, I vowed there would be no mercy from the fires of the melting pot.

Just about 20 minutes later, I finished sorting the gummis, ending up with a wonderfully color-coordinated counter full of candy, and hands that appeared to be covered in a buttered cooking spray. One hand-washing later, we’re ready to move on. 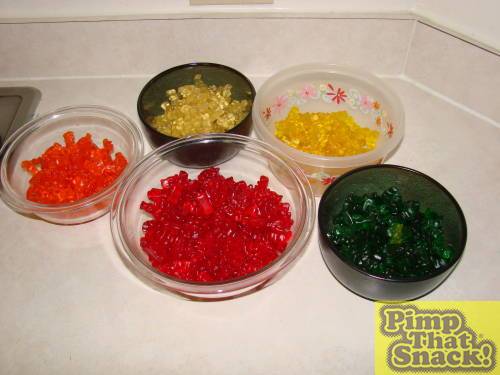 As you can see, I mobilized every spatula I own, unwilling to cross-contaminate the pristine perfection of each gummi color. I let everything melt slowly on a very low heat setting. Not only did that give me time to prepare the honey bears, but it also gave me a sick sort of pleasure as I watched individual gummis slowly die in the gummi magma. A tip, if you’re going to try this at homeÂ…stick with stainless steel. The black saucepan on the right rear burner didn’t seem to want to melt the gummis as well, and it took more than twice as long as the others. 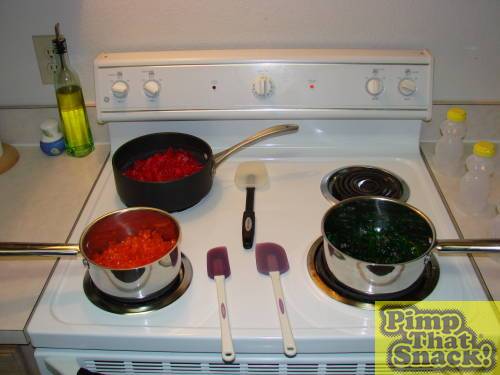 Onto the honey bear preparation.

The first time I tried this, I just dumped the gummi magma into the honey bear. It looked great, tasted even better, but took about 10 minutes to get the thing out of the mold. As we’ll see later, melted gummis are the stickiest form of matter in the universe. I’ve even started using gummi magma to hang artwork around the house. So, to combat that problem, I figured I’d try a lubricant of some sort. Since my hands appeared to be covered in oil after sorting the gummis, I figured oil would keep them from sticking. So, a few drops of vegetable oil, and a few shakes later, the honey bears were stick-proofed.

Meanwhile, the melting process continued, and you can see that it starts out as sort of a runny gummi snot of sorts. I imagined at this point that I could hear their little gummi screams, but that didn’t deter me from my mission.

They don’t require any stirring, or really any attention at all. They melt nicely into a uniform goo, and in fact, stirring can be quite a hassle as the magma sort of encases anything it touches with a Blob-like ravening. 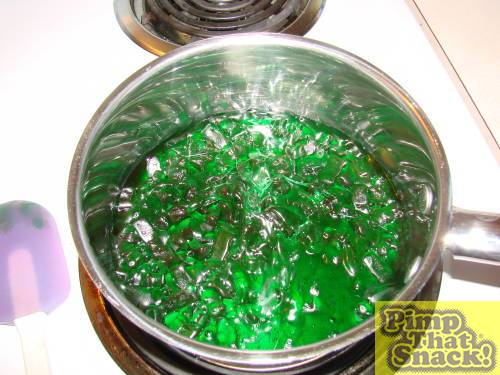 I made the rookie mistake of trying to stir the greens halfway through the process. As you can see, my spatula barely made it out alive. It’s interesting to note the gummi attempting a prison-break up through the tractor beam of magma. He was quickly returned to the pot of death, but I do give him my admiration for the attempt. 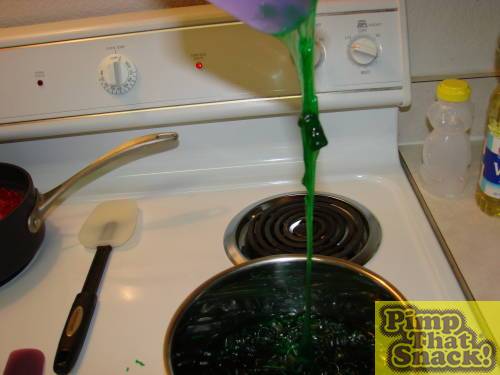 I saved my buddy Powder until the very end. I watched his cute, pale, little head poking out above the rest of the gummi magma as he slowly sinks, in sort of a Terminator 2-esque death scene. I felt no sorrow as I watched him go, as I felt he was going to a better place, a place where all gummis are the same color and consistency.

Soon enough (about 10 minutes on low) the gummis were all melted, and the magma turned clear. It’s all shiny and uniform in color, but still vaguely menacing, and I was expecting it to leap out of the pan and attach itself to my face. My spatula was well and truly stuck to the stovetop at this time, thanks to the crazy-glue consistency of the magma. A word of warning: as anyone who’s worked with molten sugar knows, getting this stuff on bare skin is horrifically uncomfortable to say the least. It’s really, really hot, and it clings to your skin, so tread carefully when pouring. 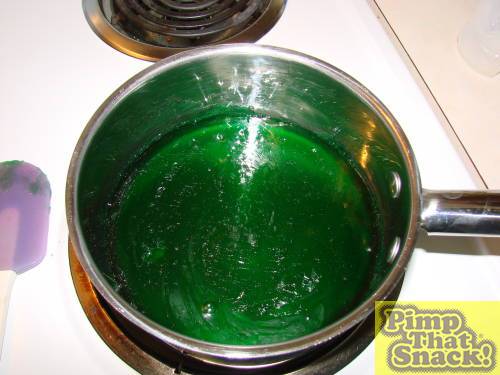 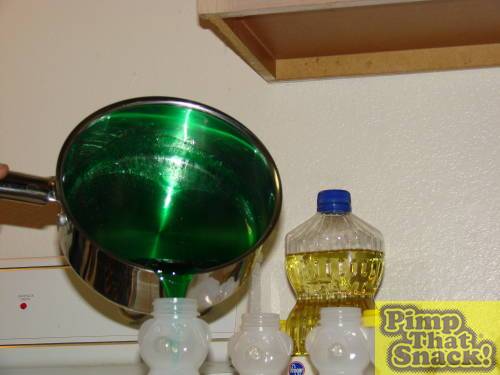 The magma will try to get away from you as you pour, especially when the sides of the stream cool. They’ll create thick channels that will guide the still-runny magma from the pan, but will eventually detach and fall onto your honey bear in a sticky mess. Keep your spatula moving, and if you’ve got some sort of funnel, that might work as well.

From this point, just repeat the process with the remaining colors, put the caps on, and toss ’em all in the refrigerator overnight. The following day they looked like this. 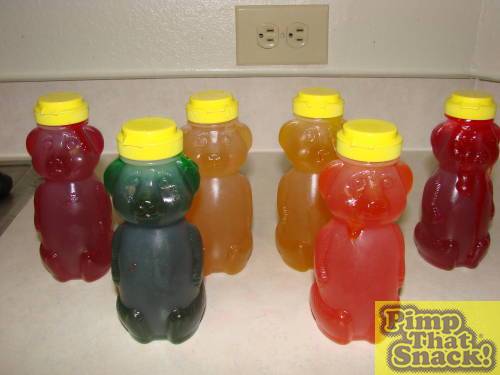 I used an X-ACTO knife to slice through the honey bear containers, and it cut through them like butter. Apparently the gummi mixture was tough enough to resist being cut along with the plastic. So, even when I poked through, the gummi sort of flexed out of the way and then sprung back into shape when the knife passed. So, here’s the final product. 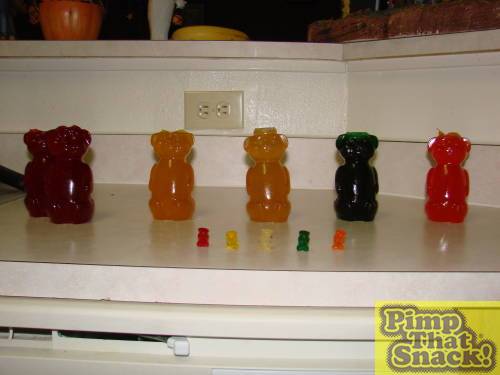 The most difficult part of the whole exercise was getting the small gummis to stand up in front of the big ones long enough to take a picture. You’ll find that the gummi substance tastes infinitely better (sweeter?) after it’s been melted down and then allowed to solidify again. But, like I said, it also gets significantly tougher, so it’s quite a workout for the teeth and jaw. I bit the head off of the first one I made (just because, that’s why) and it took about 10 minutes to break it down enough to swallow.

So, I hope everyone enjoyed my addition to the pantheon of Great Gummi Projects.