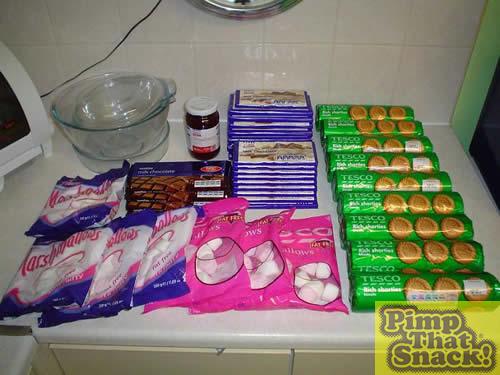 STEP ONE
Make a mould 500cm across and 10cm deep from cardboard, covering it with cling film or foil (or both if you run out like I did) to stop the chocolate sticking to It. Like me you may need to buy and drink and whole crate of Lager to get some cardboard, it was torture 🙂

STEP TWO
Melt up 4kg of chocolate, this is enough to provide a decently strong base for this mighty biscuit. Pour this into the base and put in the fridge to set. Your half meter mould should just fit in a standard sized fridge – If not it might take a while to set.

STEP FOUR
Melt half your tub of butter in the microwave and mix the delicious molten butter into half of your crushed biscuits – stir fast or the biscuit goes soggy!

STEP SEVEN
Take a whole jar of jam and melt it to a molten liquid mass and spread it over your marshmallow. note: do not be tempted to try eating the molten jam – it burns!

STEP EIGHT
Melt the rest of your marshmallows and cover the jam. Leave to set and in the mean time melt the remaining half tub of butter and mix with your remaining crushed biscuits.

STEP TEN
Melt up the remaining 6kg of chocolate and pour around the sides and over the top. The top is deliberately messy as real wagon wheels have an equally amateur looking finish! Add extra chocolate to get an even top if neccessary but 6kg should do it.

STEP ELEVEN
After leaving this monster to set for a long long time it should be safe to remove the mould! My wagon wheel is 2 tone as the local shop ran out milk chocolate (cant think why!! haha)

STEP TWELVE
Admire your handiwork and take a picture of yourself with your monster biscuit to serve as an eternal memory of the day you held something so extraordinary!

A quick weigh in on the bathroom scales reveals a 13kg final weight! That’s over 200 times bigger than your standard store bought wagon wheel! And price per kilo it’s a lot cheaper too – you’d actually be foolish not to make one!!

STEP THIRTEEN
Slap together a quick wrapper from wrapping paper and add a mega sized wagon wheel logo for good measure! Congratulations, now have yourself a beer for a job well done! 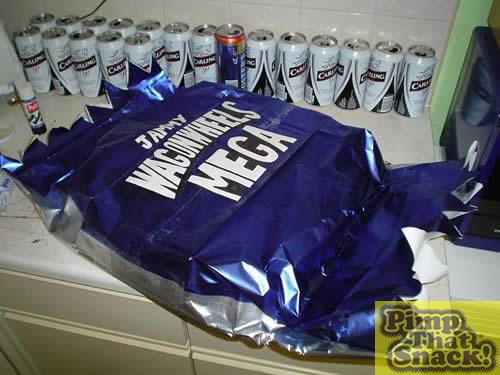