Turkish Delight
by UberSnack for £10.00

Sorry for the lack of picture of the ingredients.

OK, after numerous attempts to make the mysterious filling of the Turkish Delight, I gave up, and decided to do it the easy way.

Take 18 Turkish Delight bars, and peel the chocolate off them ... storing the chocolate in a bowl for later. The pink gelatenous masses you are left with are very sticky, so you can easily stick them together in the shape of an Uber Turkish Delight. In fact, you are only limited in size to the amount of bars you are prepared to peel. Begin layering the pink things. I chose to do a classic 3 x 3 size, and then doubling it up. Here's a tip... just peel the chocolate from the top and sides of the bars, but don't try and take it from the bottom, as it is too thin. Just leave it on for some extra chocolate-y goodness inside the bar. One layer of bars has the chocolate side down, then the second layer has the chocolate side up, for extra stability. Take the chocolate you have peeled away, and either put it in the bin, or eat it. I tried to melt it over the boiling water, and it doesn't seem to melt. It just turns to a mush instead. 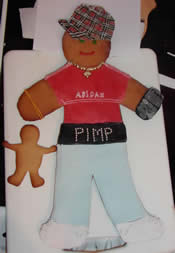