You can see in the background the deteriorating state of the kitchen as the project progressed. T’was…interesting by the end.

Coated the top of the marshmallow and chocolaty goodness with the special jam, and it was time for the shortbread base!

Made up a shortbread dough with flour, sugar and marg, but couldn’t find anything to use to cut out the base – more improvisation was called for!

Baked it in the oven, let it cool etc etc… then slathered it in more melty chocolate to form the bottom of the teacake and shoved in the freezer. By this stage we were feeling quite ill from the amount of chocolate we’d ‘tidied up’, as it tended to go everywhere each time. Put the bowl of mallow and jam in hot water to melt it out – accidentally added too much water and flooded the top – nothing that can’t be mopped up though. It’s still good!

Upturned the bowl onto the base. Catastrophe! Over-meltage caused a chocolaty landslide to erupt out, requiring a lightning-fast sprint to fling it back in the freezer.

Despite its unpromising look at this stage, the finished project was pretty pimp-tastic, dwarfing the puny and pathetic Sainsbury’s attempt. The chocolate at the top was about an inch thick, so it was more sawn/smashed open than cut in half, but the inevitable cross section speaks for itself:

And, aside from the bizarre jam, it actually tasted pretty good too. That’s teatime sorted for a while then. 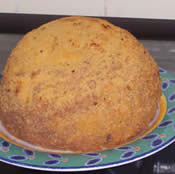