The Big BIG Purple One
by Charlotte and Liam for £10.00

After careful consideration we have decided that Quality Streets just aren't good enough anymore, so we made it better!!! We had found that 'The Big Purple One' was disappointingly small so decided to make a 'Big BIG Purple One'! ( Also there Weren't many snacks left that hadn't already been pimped ) .

Firstly , we made a mould to make our purple one dome shaped , we made this out of a puffed wheat packet. This took some cutting and sellotaping . We then lined the mould with clingfilm to stop it sticking as this is all we could find.

Next we melted down two of the bars of chocolate to make the basic shell . we poured this into our mould and kept rotating it infront of an open freezer to set it quicker. We left it in the fridge for an hour to set.

Meanwhile we started on the caramel. We didnt know how to make caramel so we found a recipe on the internet. The measurements where half and half sugar and water.

This was the perfect opportunity for a beer break which was splendid and really hit the spot . (we could easily have written a whole column on beer alone ).

After it had reached the boil it started to turn golden brown in colour and so was done. To this we added heated cream ( to stop the caramel from going hard and crunchy ) and stirred it all together.

Then we added the hazelnuts to this mix and poured it into our chocolate mould.

We left the BBPO in the fridge for a few days because we were tired from all our efforts. Also this gave the caramel a chance to solidify. At this stage we cleared up for the day and washing up was a hassle as we had burnt the caramel pan . The lesson - use a heavy based pan. 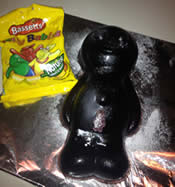 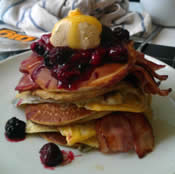 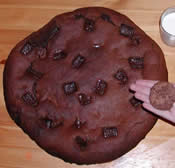