Regulars to the forum will be aware that I am obsessed with ‘mash-ups’ or as they’re sometimes know Bootlegs, or booties – if any of you don’t know what I’m on about, these are tracks produced using two (or more) different tracks which get spliced together. A good example is the recent Pink Floyd vs Eric Prydz track, and there’s also an album out this week with a few other good mixes on it. My particular favourite DJ is Party Ben, whose amazing Veruca Salt vs Pussycat Dolls track is currently the most played mash-up on my last.fm. Have a look at www.bootiela.com to download some of the best stuff around for free

Anyway… I decided to mash-up some snacks in the same way, and make a bootleg snack. To decide what to use, I got everyone on the forum to vote, and then spliced the ones with the most votes.

Top three were milky bar, fruit pastilles and mars bar. Kit Kat also got the same amount of votes, so I thought that adding wafers might include this snack. They sound delicious individually, but together, revolting. This clearly needed some skill. What a pity I was making it.

By the way, in case you’re not from Yorkshire, we call sweets spice up here, which conveniently rhymes with splice. 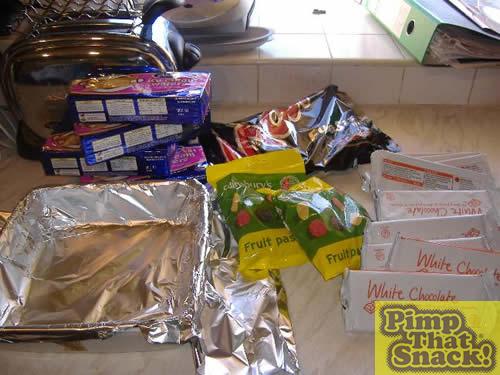 2 bags of fruit pastilles
12 100g bars of cheap white chocolate, 4 150g milky bar (had to do a pimp dash to the co-op)
4 packs of askeys wafers (even though I only used one pack)
1 bag of fun size mars bars
bit of ready made squeezy icing (to use as glue)

1. First of all, we need to decide how we’re going to mash it together. I decided to utilise the fruit pastilles as decoration rather than mixing them in. Working backwards, I decided to make a turntable, which decided the shape of the pimp.
2. Line a square dish with tin foil. This step is usually left out, which means everything usually needs chipping out dangerously. It did mean the top wouldn’t be perfectly flat, but as it was being covered in fruit pastilles, did it matter? Well, yes as I’m obsessive compulsive, it did cross my mind… 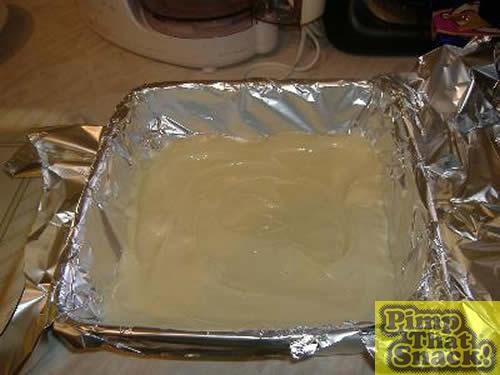 3. Using the patented method, melt the white chocolate, and line the bottom of the dish. This makes a good solid base to start with. 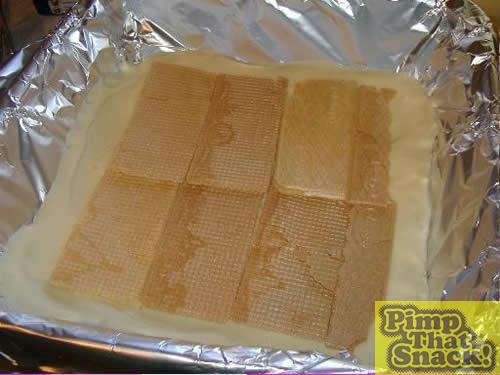 4. After this was a bit harder, I added wafers to start off the innards. I sandwiching wafers with mars bars seemed a great way to include both the idea of a kit kat and a mars bar. 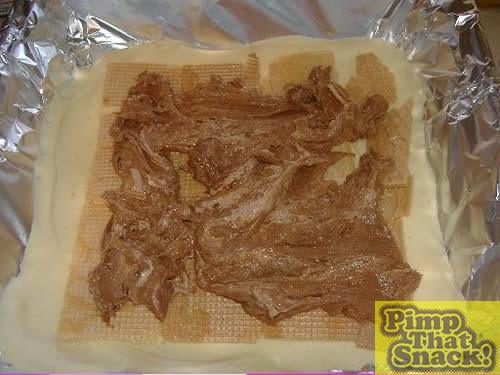 5. An important choice then needed to be made. Should the mars bars be melted, or whole? To help with your own decisions about mars bars, you should perhaps know a little known fact about mars bars. They explode in the microwave. This is the state of them after melting. I was very disappointed. 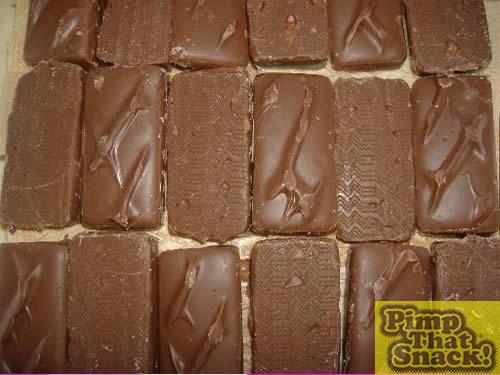 6. For the next layer, I cut the mars bars in half lengthwise, and put them on top. Eagle eyed viewers might notice the mars bars are perfectly aligned, and alternate between the bottoms and the tops. Obsessive disorders aren’t that useful when pimping as it certainly isn’t an exact science… 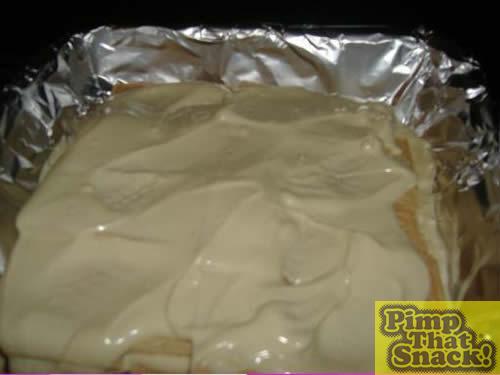 7. For this bit of the pimpage, for the first time ever, someone else was in the room. My friend Cakey was amazed that after melting the chocolate and pouring it over the top and around the sides, I put the chocolate coated bowl straight into a sink full of soapy water. 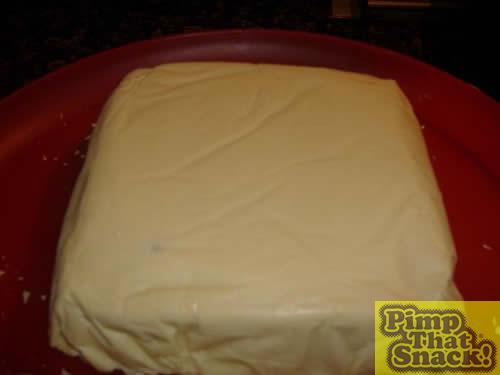 8. Once hardened overnight, I turned it out of the dish. Luckily the foil came away from the dish, but the foil didn’t come away from the chocolate. Sod it. I took it downstairs with all the decorating stuff, and drank Smirnoff Ice until it melted a bit. You can see from the picture, I eventually got the foil off, but the top was as I feared a bit creased. Doesn’t it look like a tablecloth? 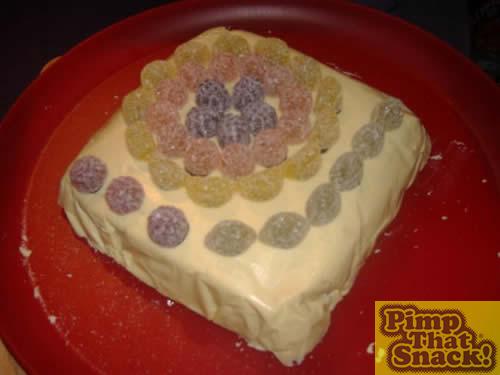 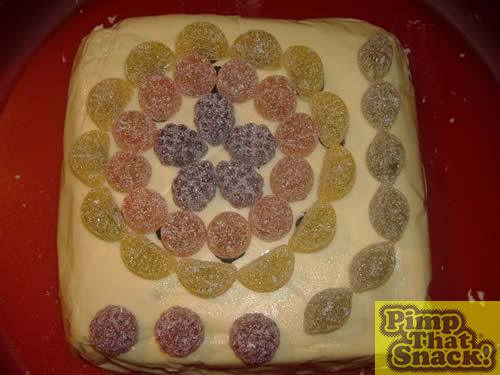 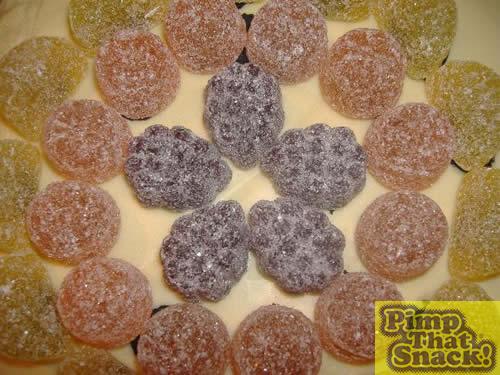 9. Look at the state of this! Using ready to use icing, I stuck fruit pastilles on the top to make the very image of a turntable. Can you tell that’s a record, needle arm and 3 buttons? No. I think you’ll find you’re wrong. 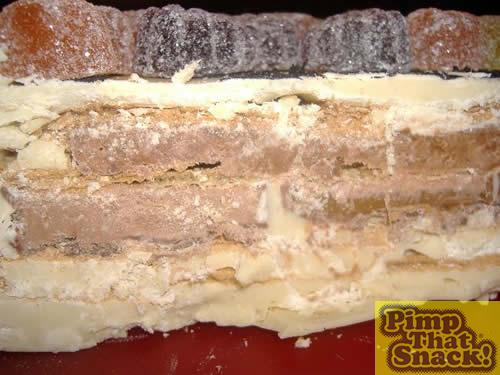 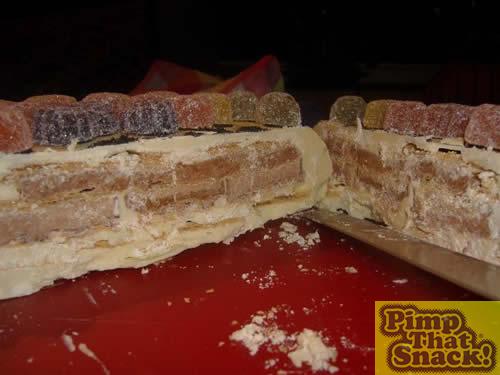 10. Cutting it in hard was really hard work. The melted mars bars rehardened again to the approximate toughness of diamonds. The ones I didn’t melt were actually delicious sandwiched with the wafers, and even though a mouthful with a bit of everything WAS indeed revolting, separately it was still delicious.