With all the other fine pimps out there we were stumped as to what we could try.
After an hour of roaming a poorly stocked candy section in the store we made our way to the cake isle.
And there it was, the box of moon pies, we thought “awesome! it’s not too crazy for an impromptu first pimp,
but not crazy easy either…”
None of us could actually remember what a moon pie tasted like so we ripped open the package and put our
taste buds to the test. We decided on sugar cookie mix instead of crushed graham crackers for the crust-like bit
’cause it would taste better and we didn’t realize it was graham until a few days later when we looked up moon
pies online.

Then we proceeded to buy a box of butter,
18 king-size bars o’ chocolate,
5 bags of marshmallow,
1 carton of eggs,
3 bags of sugar cookie mix
and a pizza round to bake it on.
We left the store $45 poorer, grins as wide as could be and towing about a million calories in our sacks. 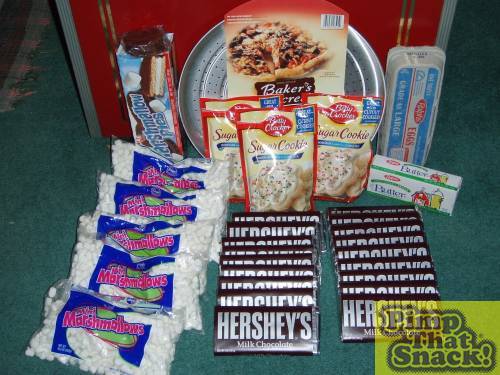 We then headed back home where the groggy unsuspecting parents were about to embark on dreamland.
Unfortunately, we didn’t get a shot of the looks on their faces when we told them how we planned to
destroy the kitchen by morning. Much to their chagrin they left their clean kitchen to head for bed,
knowing full well that come morning a disaster of unequaled proportions awaited their cleaning hands….
Did I forget to mention that I, Whitnee, the resident disaster maker was flying off to college in a few days?
FYI, perfect time to destroy the house, parents are going through that empty nest syndrome and you can, or at
least I could, do no wrong 🙂

While Ed was setting up the entertainment in the living room the rest of us, we got the biggest pot we
could find to mix the sugar cookie batter. As we melted 3 sticks of butter there was a looming ripple
of sure fired cardiac arrest if we partook in our soon to be masterpiece. Fortunately we left all
thoughts of imminent death and baked on. 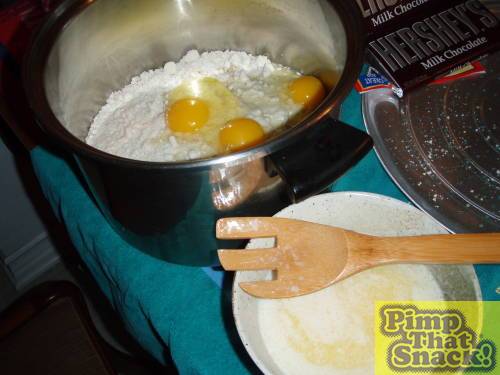 We took half of the 3 bag mixture and smushed it on to the pizza round. Andi, one of the two bakers,
decided since pimping is about making things better she’d make ridges to add an aesthetic appeal. 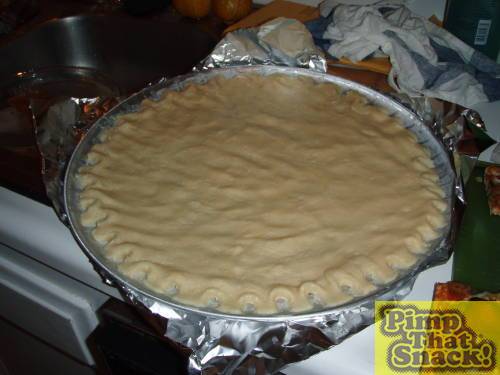 While the first cookie was baking we melted some of the chocolate so we could coat the bottom layer.
Well, we were going to melt only some chocolate, but somehow all of it ended up in the pot. And if you
know anything about chocolate, or at least more than we did at the time, it starts to burn the second
you stop stirring it. This was a major hurdle ’cause in the living room was the DreamCast setup with Chef’s
LoveShack awaiting us and how could we play if we had to keep stirring? Well, what’s more important?
Hmmmm…. “To hell with the chocolate, we’ll take it off the burner and take our chances!” 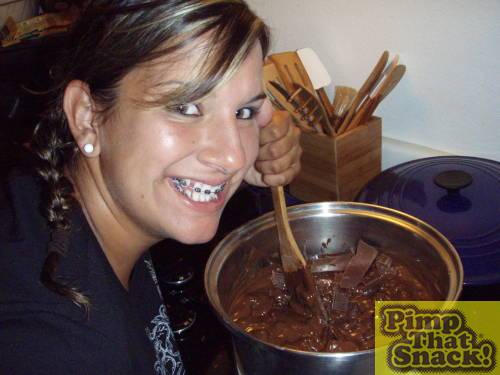 After the first layer was coated and placed on our make shift tray, cut up postal boxes held together with
duct tape and wrapped in foil, and the sugar cookie top layer was safely baking in the oven we started the
arduous task of melting 5 bags of marshmallow. On the package was a recipe for rice krispie treats and it
said to add butter to the marsh so we rummaged the fridge and found another box of butter… So, for each
bag of marsh we added half a stick o’ butter; for those of you keeping track that’s 5 1/2 sticks of pure
yellow fatty-buttery goodness. 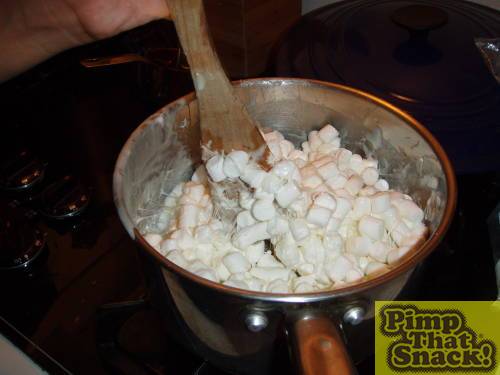 We put one bag of marsh with the half stick o’ butter on the cookie at a time. This ended up to be more
difficult than originally suspected. First, the marsh melts and starts to ooze over the sides…
Second, it be sticky and attaches to anything and everything…definitely a sure-fire way to wax your arms 🙂
We employed one of the pimp team members, Kailah, to sit by the cookie and constantly push the marsh towards
the center. We also brought in a fan to help out with the cooling. Later we got the idea to aerate the marsh
by lifting globs of it with a spoon… Kinda like the taffy pullers. 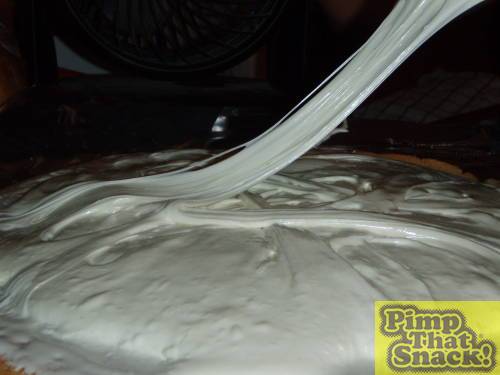 Finally we were able to add the top sugar cookie layer. Most of the marsh stayed inside, thank goodness…
While this was being attempted the chocolate was being reheated and we were elated to see it not burnt to
the bottom of the pot. Using a measuring cup we added the chocolaty goodness. Unfortunately it ended up in
a blob ’cause it was too hot. The chocolate wouldn’t cooperate, it kept running off the cookie!
Mind you, we did this project around 1 am, but we were having an unseasonably hot week for a summer in SoCal. 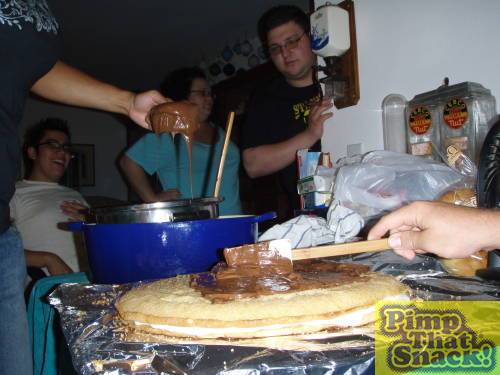 So we left it over night with the ceiling fan and mini fan on full blast. When we awoke in the “morning”
marsh had oozed its way out through the chocolate and made all of our hard work look like something Joe’s
dog created after eating a 50lb bag of dog food in one sitting… NOT Pretty… unlike that mess we had no
problem taking out a huge cleaver and shaping this beast so it would resemble a moon[ish] pie.
Luckily the chocolate was in that soft, but not too soft stage…you know, where it’s kinda like a left out
in the sun too long play dough. Anyhoo, we shaped the beast then brought out a tape measure which read a
whopping 17″ in diameter. After we took our pics of the cross-section we made the horrified parents take
a bite and then we divvied the pie so no single person could, on accident, die of cardiac arrest or go into
a sugar-induced comatose. 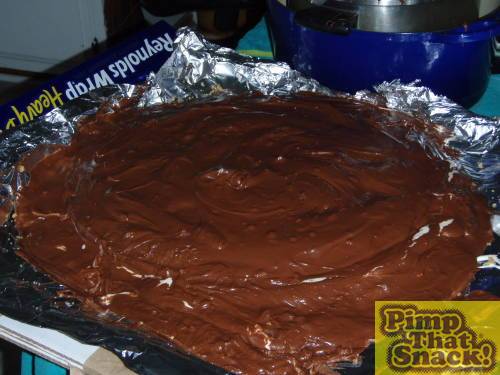 A few days later the pie still sat in our fridge so we handed pizza size slices to the neighbors…
Oh my… bad idea… I’ve never seen children run and talk so fast, their parents weren’t too pleased 🙂

The baking team: Joe, Kailah, Ed, Andi, and Whitnee… With the much improved moon pie 🙂 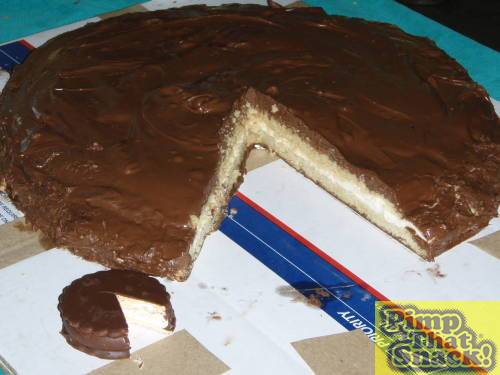 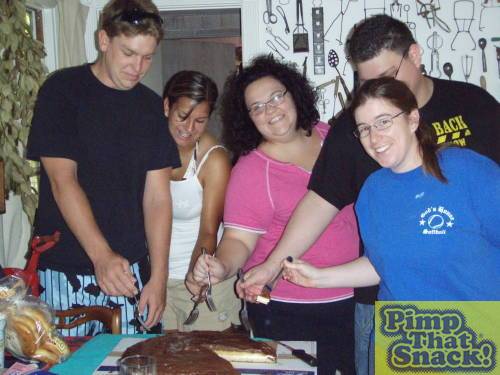