It has been brought to the attention of myself that in order to fully enjoy pimped out snacks,
we really ought to be using the proper equipment to indulge ourselves. Standard cutlery is far from adequate,
which is why my brother, our pyromaniac (known to others as Sam) and I, spent a day resolving this problem.

Stuff you will need:
Some wood
Some metal (shiny)
Accessories
Tools

NB: there will be no need for measuring equipment.
Estimated cost: free, made entirely from stuff which was lying around.

The first thing you need to do is identify an appropriate handle for your cutlery.
Mine came from a broom which I vandalised that day.
The next is to decide between spoon, spork and fork. I selected the spork as my favourite of all cutleries.
The selected attachment must be fashioned from a piece of metal. It is worth mentioning at this stage that
in order to achieve the best result, it is important to use the most manly tools available to you.
We chose to use a grinding wheel, a disk cutter, a saw and a big hammer. If these items are not available to
you then a rock crudely attached to a bit of wood will suffice.

As regional experts in drinking vessels used for the consumption of ale,
we were luckily aware of the importance of which metal you use. Apart from being shiny,
it is worth avoiding poisonous metals eg. aluminium (aluminum for you crazy Americans)
which may cause Alzheimer’s; and lead, which causes heavy metal poisoning then brain damage.
Acceptable alternatives are titanium and stainless steel (regular steel tastes funky).

Here are pictures of us fashioning the appropriate shapes from metal.
A grinding wheel can be used to make metal components more shiny. 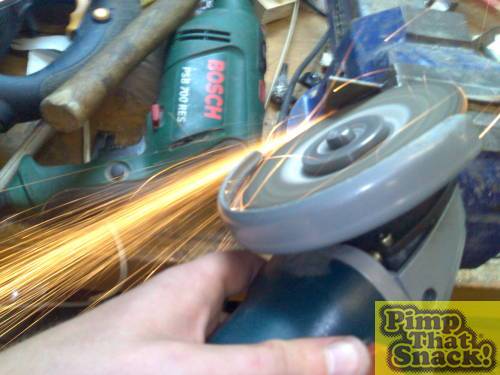 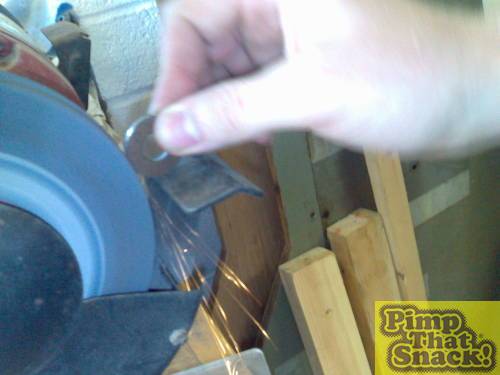 When using power tools, safety awareness is paramount as demonstrated by our tame pyromaniac. 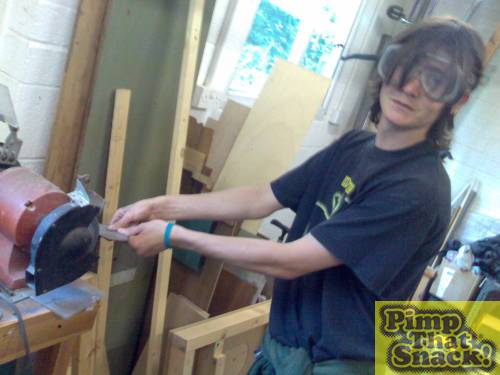 The dimensions for this project are very important, in order to make the most efficient use
of your oral capacity, the width of your cutlery must exactly match that of your cake hole.
This is why you do not need any proper measuring devices. 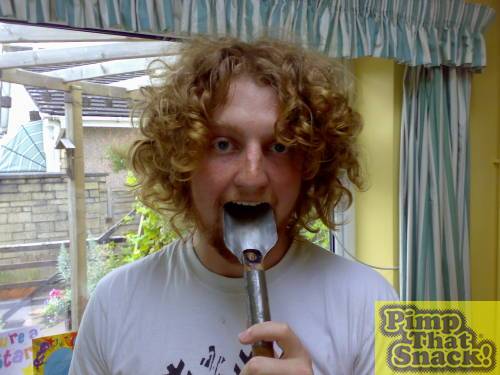 We spent some time discussing the features of existing cutlery which we found disappointing,
among the problems was the lack of straw which would be good for getting that last bit of gravy/sauce.
It couldnÂ’t get in the way so a telescopic straw was decided upon. It comprises a curly straw wrapped around
the handle, which joins on to a telescopic metal tube; formerly the aerial from an r/c transmitter. 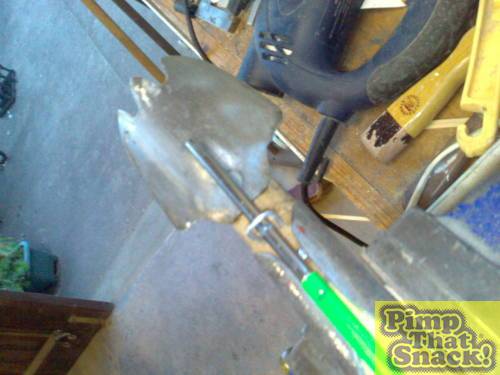 Traditional cutlery also lacks a completely unnecessary laser targeting system.
Ours are not traditional. A laser pen which can usually be found residing in the bottom drawer of my desk,
seemed appropriate. The tip I selected was the standard dot, picked marginally over the cross hair.
The laser pen was embedded neatly in the handle. The last thing to do was to align it. 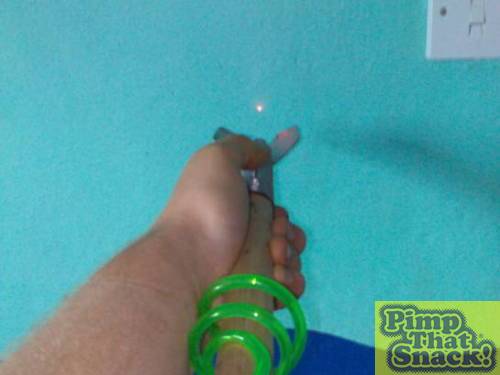 After assembling the pieces together using the most manly glue there is (araldite), there is one finishing touch.
Everybody knows that in order for buttons to work correctly, they must be red.
The button controlling the laser must therefore be chosen very carefully. The one I selected was originally a
red button probably intended for use in conjunction with some sort of fabric.

We did expect a night use torch from our pyromaniac after explaining that the mini torch from a combo
lighter could be removed for use with his spoon. It quickly became apparent that he didnÂ’t understand when
he revealed a spoon which featured a lighter in the handle. 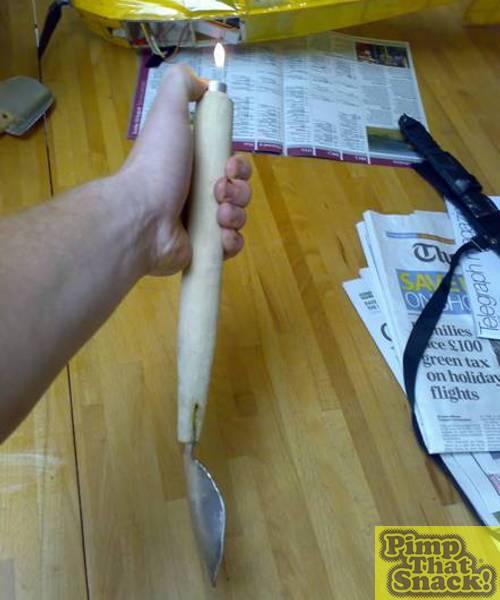 Current models include the spork as described, the spoon which includes a cross hair laser,
a defence spike and a telescopic straw, and pyromaniac spoon with lighter attachment and a left handed skew.
There is no need to go to the effort of making your own knife if you had already been deemed owner of the
most aggressive kitchen knife at university. 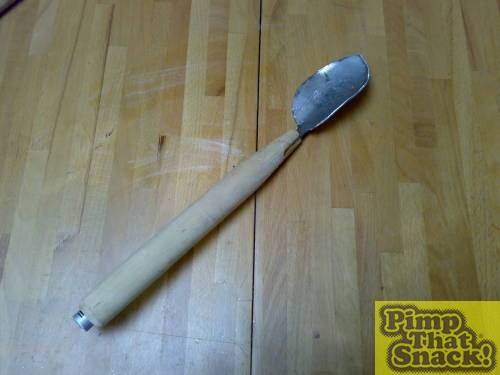 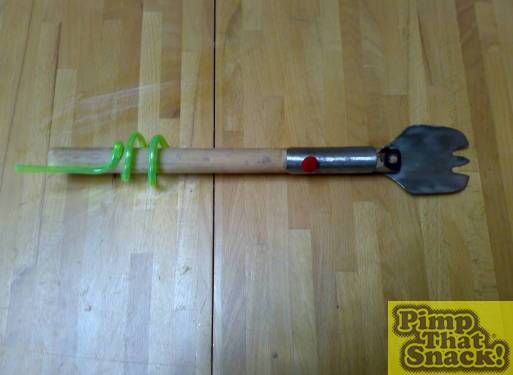 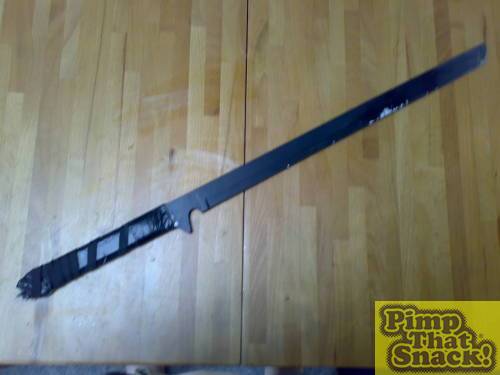 Optional features:
Laser for targeting
Lighter for making fire
Spike for defending your food
Telescopic straw for getting the last bit of juice/sauce

Future developments:
A torch accessory for eating in the dark
A retractable harpoon attachment for eating things which are far away and/or still alive
A more powerful laser capable of cutting your food

This pimp was brought to you by the Bailey brothers, George and Jon, with the help of their pyromaniac.