With a boring Bank Holiday Monday looming, we decided to have a go at pimping a snack.
After a visit to ASDA we decided to pimp a Curly-Wurley and picked up several bars of chocolate and some Werthers – butter candy (we couldn’t get any toffees).

Upon trying to melt the Werthers in a bowl over some boiling water we soon realised that after the Werthers had glued to the bowl and the spoon and we had also broken a glass in the process, this pimp wasn’t going to happen.

After looking through a book on how we could make toffee, we came across a recipe for honeycomb. Bingo! And the Giant Pimped Malteaser was born! (although a Crunchie was an option).

Another trip to ASDA to pick up some bicarbonate of soda and honey we were set to go.

Mix honey, sugar, water and butter into a saucepan.
Then heat until sugar and butter are dissolved and bring to the boil. We removed it from the heat and stirred in the bicarbonate and the mixture rose up in the pan!

We then greased a couple of bowls and lined them with baking paper for easy removal. Pour the mixture into the bowls. After the honeycomb had set and we had removed all the paper (greasing both sides of the paper would have been a more sensible idea!).

We then stuck the two halves together…………..voila! at this stage it looked like a honeycomb big mac! Mmm tasty! 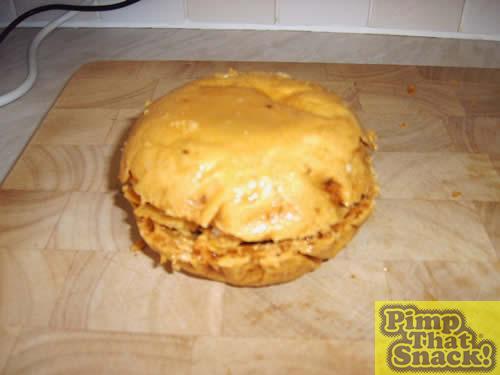 Then to the chocolate melting stage. With our honeycomb Death Star balanced upon 8 chunks of chocolate we proceeded to pour on the gooey chocolate mix. We had to wait for it to set before turning it over and repeating the procedure until the whole thing was covered. 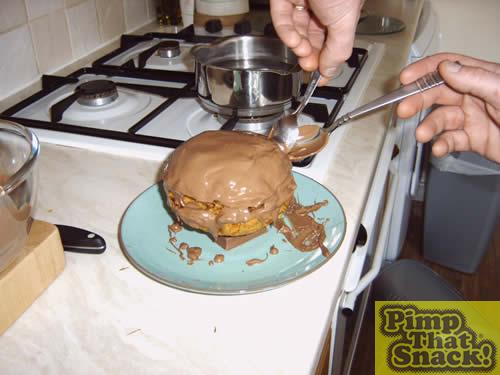 Here is the final comparison to the tiny malteaser!