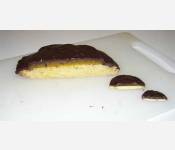 Jaffzilla
by Pen Grant, El Etherington and Alex Holland for £2.20 It lives! Visually, it’s a corker – the gentle curve of the sponge base, the colour of the chocolate, the Ayer’s Rock-esque rise in the middle for the Smashing/Disturbing Orangey Bit. It’s also rather large. Pimptastic! It’s not actually as garguantuan as first appearances suggest – those are mostly Jaffa Cake minis, with one regular Jaffa cake to be found on the left. For a more accurate comparison, here’s the cross-sections:

For the record, the end product is revolting. While the cake and chocolate are A1 Tip Top, the Disturbing Orangey Bit has no sugar in it whatsoever, and tastes like calves feet dipped in marmalade.

Obviously, the above is a magnificent beast brought down by one fatal flaw - the Disturbing Orangey Hoofy Bit. Our Pimp Food Scientists couldn't stand to let this ruin the fun, so we created a new Jaffzilla with an all-new Orangey Bit. Is it smashing? Not half.

As you might have guessed from the photo, we've used off-the-shelf  Hartleys Orange Jelly for this, with a dab of fresh orange juice for  fly pimp points. Use half the amount of water recommended for a nice solid orangey bit. The key differences between this and our previous  effort are firstly the presence of a lot of sugar in the jelly, and  secondly not having to smell the awful, awful stench of unflavoured gelatine during the make. Son of Jaffzilla was offered as a sacrifice to a group of Civil Servants, to make up for their historical Jaffa defecit. They wolfed it in ten minutes. Success!