After a lot of thought and pimpthatsnack surfing on a snowy day in Britain, we decided that, to celebrate the start of half term, it was our mission to make a Giant twix. Yes, a giant one.

But, what to use for a mold. Again, after a lot of thought, we figured it was time for a trip to the DIY store of choice, B&Q, and half an hour later we were the proud owners of a metre long bit of drainpipe with end caps for £4. It measures 1m long, and 10cm in diameter, with a useful grate on the top for, well, not very much.

It was time to visit the supermarket of choice, ""LiDL"". After analysing a twix bar thoroughly, and doing some calculations, we calculated we needed a lot of chocolate. A lot. So, purchases from ""LiDL"":

On we went. Starting at 9am, we attempted to work out how we were going to do this. It was a big project, but here it goes. Failing to have a better idea, we then dropped the whole pipe into a cold bath to cool it down.

OK, on with the shortbread, The normal twix biscuit is very much like shortbread, except with less butter. So we reproduced this with a shortbread recipe. We made 6 huge slabs, roughly twix-shaped, which were then shoved in the oven. While they were cooking, it was on with the caramel. We were worried that we would end up making a hard toffee, which was not very much like the creamy runniness of the caramel inside a twix. So, our first attempt involved heating a whole packet of Butter Toffees in the microwave. However, this wasn't too successful: although we had found the ideal way to pimp a Werther's Original, a solid lump of toffee which wouldn't unstick itself from the bottom of the bowl was really not cool.

So, it was off to the internet. We settled for a thick, more sugary version of a butterscotch sauce, which we tested and found to be almost identical to the Twix caramel. 3 kilos of sugar, half a kilo of butter, and plenty of water, cream and flour later, we had a small mountain of caramel, which we left to cool.

Now, it was time to put the whole thing together. Removing the chocolate from the bath, out came the poster tube and second layer of baking parchment and in went the caramel, spread evenly throughout the bar: Then, we cut the shortbread to perfect sizing and floated double thicknesses of biscuit in the caramel:

When this was done, we simply melted down the remaining 17 bars of chocolate and dumped it over the top of the biscuit, before putting the whole bar, now weighing a huge amount more, back in the bath.

At this point, it was time to make a wrapper to house the chocolatey beast. Finding a roll of paper, we set to work enlarging the Twix logo, and painting the whole thing the right colour. 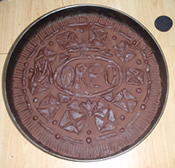