24 packs of jelly (we used Tesco value strawberry jelly priced a 12p a
pack!)
1kg of preserving sugar. £2.50
A large pan.
A Pyrex bowl which will sit on top of the large pan.
A large pastille shaped bowl roughly 22cm diameter, 10cm depth.

Start by breaking the packs of jelly into cubes and placing them in the
Pyrex bowl, we couldn’t fit all the jelly in at once so ending up doing
two melting sessions. 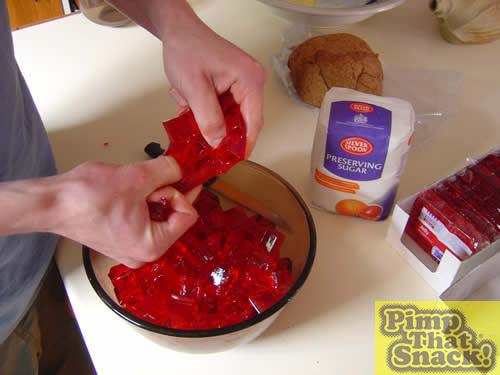 Fill the pan with enough water so the bottom of the Pyrex bowl sits in
the water, then put it on the hob. Once the water is boiling, put the
bowl of jelly on top of the pan and turn the heat down to stop the water
exploding out the of pan. The jelly will start to melt, to help it along
you might want to add a bit of boiling water, but not too much, you want
the jelly to be as concentrated as possible. 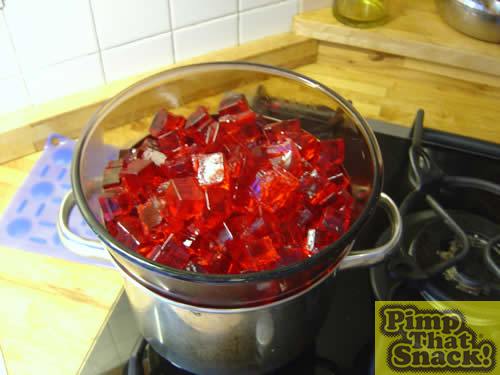 Once the jelly has melted, 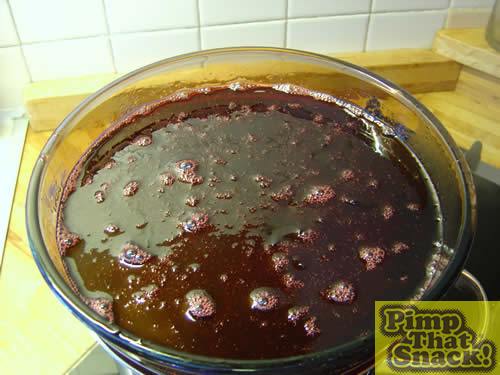 pour it into the pastille mould, we did this outside to avoid a horrible
mess.
First bowl: 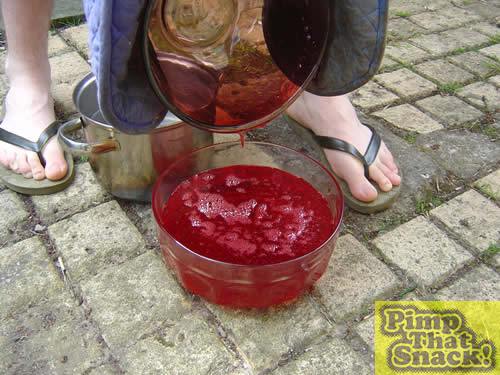 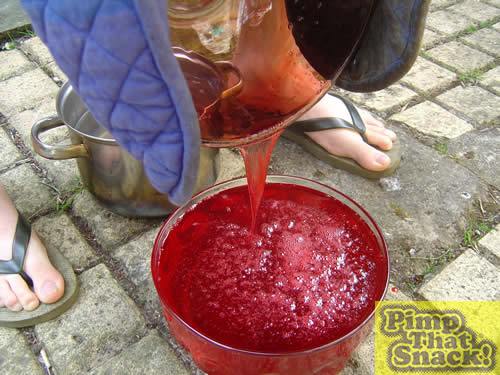 Leave the jelly to set overnight. When it sets it will be the same
viscosity as one pack of jelly but 24x the size!!.

Removing the jelly from the bowl was quite difficult, we started by
sitting the bowl in some boiling water, this melted the sides slightly.
We then pushed a blunt knife around the edge of the jelly, flipped it
upside down and shook it. It started to come away but had formed a
vacuum so we put the knife around the side again, this time with the
jelly upside down to let the air out. It started making rude noises and
with one last push from my hand it squelched out.

With the jelly out of the mould all that is left is to coat the jelly
with preserving sugar. The preserving sugar is crystallised so gives the
exact look of the sugar coating on a Fruit Pastille. 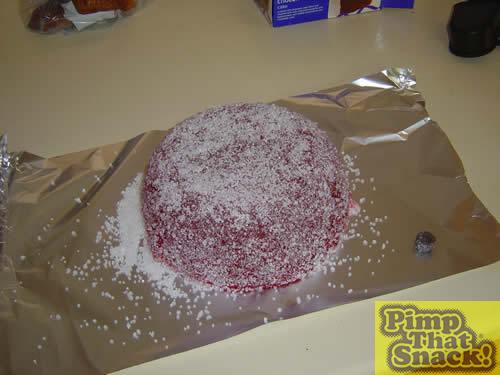 And that’s how we made a giant Fruit Pastille, all 8" of it. It will
probably last you all year, you can only eat a bite sized chunk at once.

Alistair made a video for Henry, documenting the process. It includes
interesting French music and random fast show quotes because the music
track wasn’t long enough (don’t ask about the Cheshire Cat costume!). If anyone has any music copyright/sound effects issues, please contact the Pimp Daddy!

This is the first video pimp from Pimp That Snack, and we hope to see many more in the future!