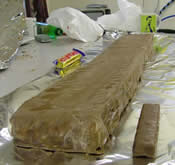 Approximate cost: £7, depending on where you shop. Fairtrade chocolate is a bit pricier than cheapo stuff, but hey, we're pimps and we can pay in gold teeth.

What better snack to pimp than one with a golden centre? The Cadbury's Crunchie is bling already, but we felt that to give it that extra gangsta quality, it needed to be pimped out. This called for a trip to the co-op and a weekend of procrastination. Such a large quantity of sugar required a large mould in which to set, so here at West Wales Customs we cut-and-shut an old laptop box and lined it with aluminium foil to contain the molten syrup. Once we'd made that, we set about melting the sugar. We enlisted the help of our ho's (that's housemates) in this task, which took 9 pans before all 3 kilos were melted. Each pan had to be heated until all the sugar melted, then baking soda and vinegar were added quickly and the boiling, frothing, molten death-in-a-pan was poured into the mould. Of course, no true pimp would be without its disasters, and we managed to do a burnout with one of the pans, resulting in a new custom worktop for our kitchen! Once all the sugar was poured, the true size of the pimped Crunchie was revealed. It was the size of a human leg. It would make a great false leg, not only would you walk with a gangsta lean, but all the shorties would want a lick!