After a failed attempt at making a malteaser which involved boiling hot sugar poured onto one of our hands (The plan was to pour liquid honeycomb into a balloon first without a funnel when one of us got burned, then with a paper funnel as there were no plastic ones available, the honeycomb solidified before it reached the end of the funnel.)

There is the story of the pimped straw which involves lots of straws hooked together, we drank coke down a set of stairs with it, lying down and almost drowned but we survived to give you this amazing Crunchie pimp. Before that we made honeycomb using vinegar like the scientist (and Delia Smith) told us to. That was bad. Just look at the picture below! Were not sure if that is mould or fungus please tell us what to do if we eat some because we might need medical attention. After that failure the idea came up for a pimped Crunchie. We used a A-one,  B-U-Double-Lizzy, dandy, bootylicious, swizzay, topflight, topnotch (as Snoop D-to-tha-O-Double-G might say) Recipe as told by Grandpa Pencil.

First we melted the chocolate using the well known pimping method of putting water in a pan, and chocolate in a bowl on top and heating. 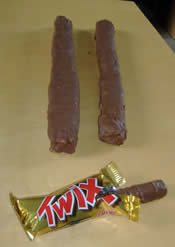