We thought long and hard about what we could possibly contribute. Our initial conclusions were ice cream based… a cornetto or more ambitiously, a Vienetta? However despite several ingenious suggestions of carving out a huge chunk of ice cream with the help of Kara’s Dad’s Black & Decker, we were scuppered by the meagre dimensions of our freezer. It would have been good though.

Back to the drawing board. And then it came in a flash of inspiration. It was our destiny. We had to pimp none other than that humble favourite… the Club.

Take that Club! Take that. The obvious difficulty of this task was always going to be creating an accurate replica of the noble CLUB motif. After a number of preliminary sketches (and ridiculous notions involving varnish, superglue, blue tack and clingfilm) we decided to make use of local resources – we needed something we could cut up, something that wouldn’t absorb the chocolate and something thick… it was obvious - a Property For Sale board. This took about 10 minutes to source locally. If you don’t live in a run down area we suggest you visit one nearby – wear scruffy clothing to blend in to avoid a beating. Although you’ll be on the rob already, so you’re halfway there. It's ok - the sign they nicked was for a let house! Having given the sign a ruddy good scrubbing in the bathtub, we were ready to create our mould. We decided to use a vegetable knife to diligently hack out our CLUB shape, which was both amusing and highly dangerous, so be on your guard! We masking taped the cut out shape (remembering to keep the inside of the B) to a large roasting dish – cunningly already supplying the raised outer edge – score! We made sure we covered all of the For Sale sign with the tape… scrub as we did, it still all seemed a bit wrong.

We melted half of our vast chocolate supply and poured it in. This took about three shifts owing to our pathetic glass bowl and the fact that a Club is the chocolatiest bar around. Don’t make as much biscuit mix as we did. About the amount for two dozen cookies should do it. Not for fifty cookies. That’s too much. Much too much. Even though we only put half in our tin, we had to cut the top off halfway through cooking as it was getting out of hand and trying to take over the oven. It was pretty handy though cause it turned out that the middle still resembled a slightly oatey cow pat. Back in the oven it went. 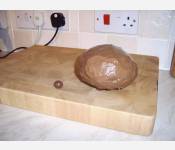