After spending 2 hours talking about giant snacks in the pub we left the girls to finish their wine and headed off to the local mini Tescos to get the ingredients for a over sized toffee crisp. Unfortunately as it was 11pm on a Saturday night Tescos was shut so it was over to the garage, however it was obviously not meant to be as they had no Rice Crispies so we changed tactics and decided to go for a giant fudge instead.

5 large bags of fudge
4 large bags of Werthers original chewy toffee (for its structural properties)
3 large bars of authentic Cadbury’s dairy milk (we wanted to keep the taste as original as possible). 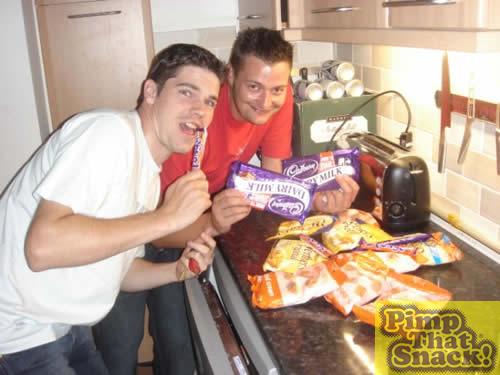 1. Unwrap toffee and place in microwave for around 2 mins then add fudge for further 1:30mins once melted stir well to mix the toffee and fudge together. 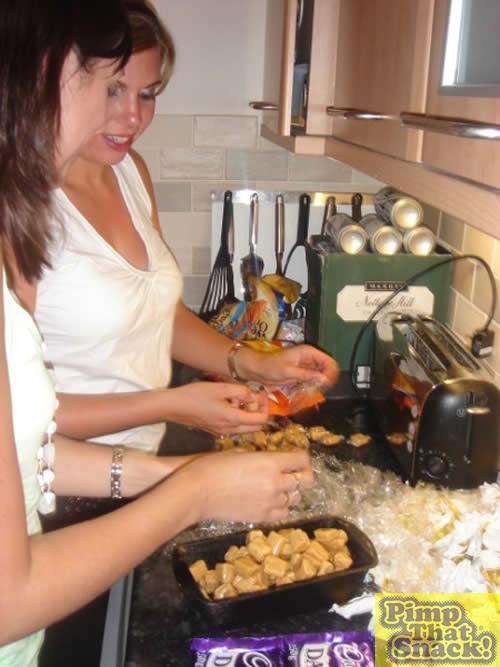 2. We created a mould 55cm long and 8cm wide from plastic and those funny u-shaped bits that hold washing machine pipes. The toffee fudge mixture was then poured into the mould and put into the freezer to cool for 30 minutes. 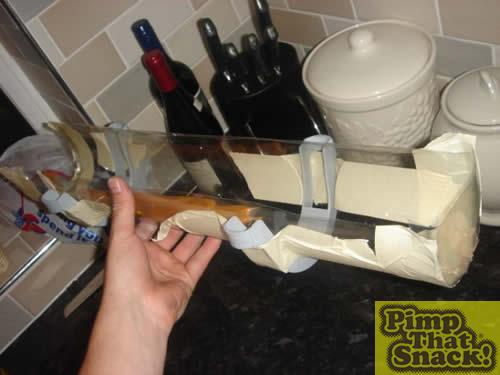 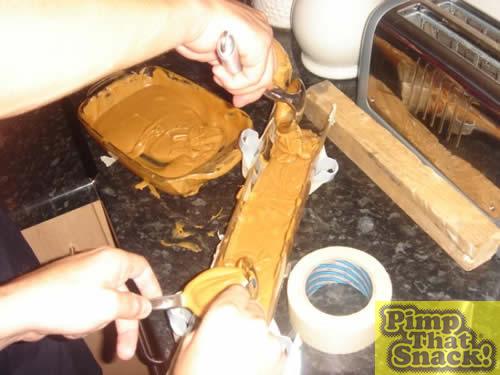 3. At this point we headed off to my work (it is now about 1.30am!) where the fudge wrapper was scanned onto the PC and scaled up in PhotoShop. This was then printed off on the A1 plotter I use to print architectural drawings on. 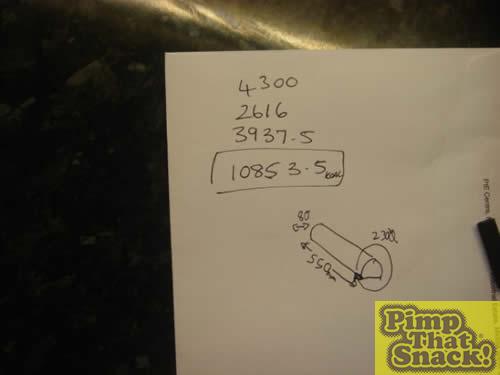 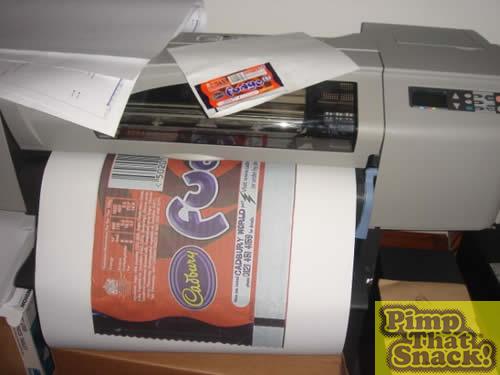 4. Back in the kitchen and the now cooled fudge bar was removed from the freezer and the mould released. This gave us our fudge finger. 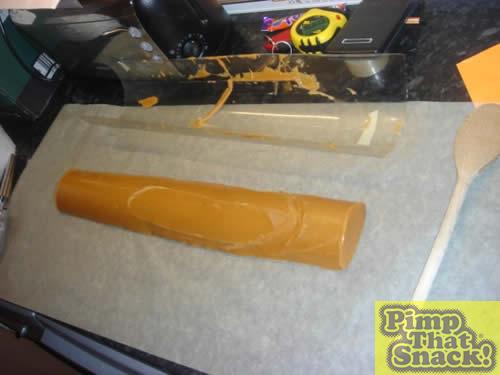 5. Two bars of the chocolate were broken up and melted in the microwave. The fudge finger was placed onto a piece of grease proof paper and the chocolate was poured onto the finger and smoothed with a knife. The finger was turned and the same prosses carried out on the under side. Once an even layer of chocolate covered the entire finger it was wrapped in the greaseproof paper and once again placed in the freezer to set. 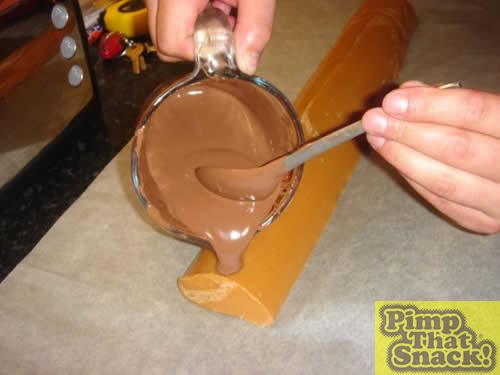 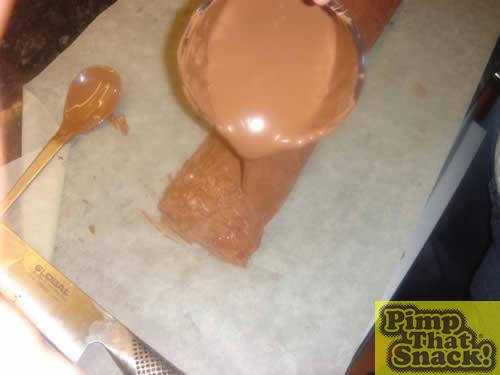 6. After 10 mins the finger was removed and unwrapped LOOKING GOOD! The final large bar of chocolate was melted then poured onto the top of the finger using a side to side motion to create the wavy pattern seen on original bars of fudge. (don’t have your finger too cold at this point or the chocolate won’t flow very well and will cool too quickly)

7. Then back into the freezer for one last setting.

8. This gave us time to cut out the wrapper and fold and glue (using Pritstick, very Blue Peter!) the long flap and ends. We first stuck tin foil onto the inside of the wrapper to give that authentic look (its all in the glorious detail)

9. The completed fudge was then taken out of the freezer and slid into the wrapper. . job done! 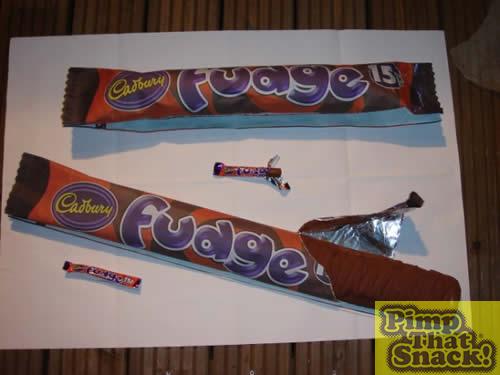 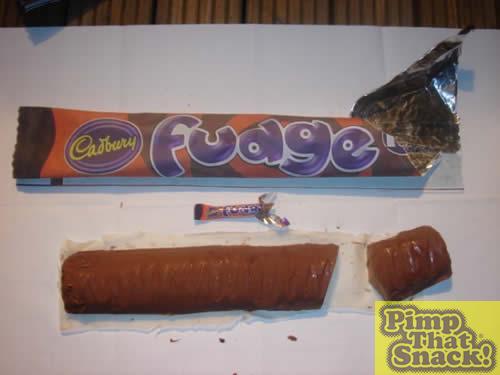 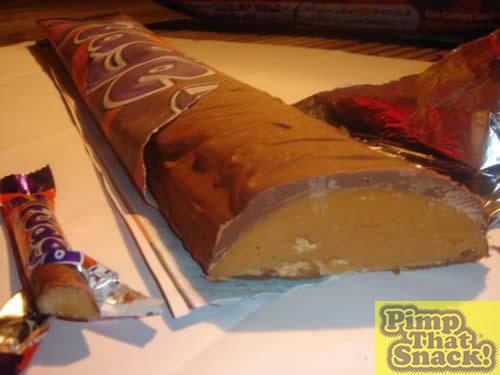 The bar tastes as good if not better than the original Due to the added Werthers soft toffee.