I chose the coconut boost to pimp because a) I loved coconut boosts and it makes me sad that you can’t buy them anymore and b) because no-one else has done it yet.

First things first, I needed to have a pimpin’ soundtrack. As the coconut boost had been discontinued, I wasn’t able to find inspiration in one, so I decided to be inspired by music from the hay-day of the coconut boost. (Cue some cheesy 90s music) 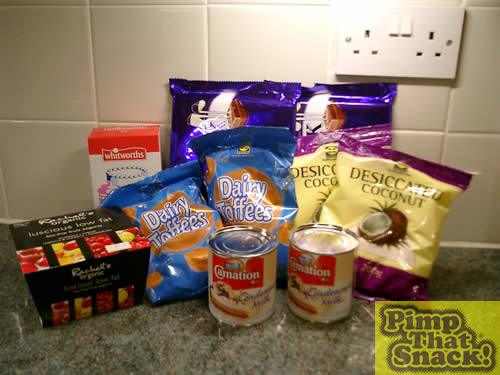 2 tins condensed millk (I did consider going for light, but really…)
2 big bars dairy milk (Gotta be Cadbury’s nothing else will do (besides Morrison’s didn’t have any cheapo own brand – also, if I had any left over, I wanted the best!)
4 yoghurts (Luscious low fat Rachel’s Organic – highly recommended)
2 bags desiccated coconut
Icing sugar
2 bags toffees (Now this was el cheapo Morrison’s own)

The more astute among you will have notices the somewhat out of place pack of four yoghurts. I’m including these in the list of ingredients and total cost as I bought them at the same time, then completely forgot about them so they were sitting out all night and I had to bin them :o(

At this point, the music must have inspired me and I realised that I had been too blinkered by the discontinuation of Coconut Boosts to realise that there were alternatives that I could use for inspiration, the Star Bar (which used to be a Peanut Boost) and a Boost (used to be Biscuit Boost, but is now laced with glucose and is marketed as an energy bar – how much sugar do you need in one bar of chocolate). So a wee trip to the shop later, I have two bars of chocolate for inspiration. Oh, yeah, and a couple of scratchies, which I didn’t win anything on, so the total cost is now: £11.13 plus £2.83 = £13.96. (Actual price about £8.50 – see later.)

I’m feeling a little annoyed at this point as the girls are all in the park having some beers, the boys are all down the pub watching the footie and it’s a lovely sunny evening.

First order of business is the yummy coconut middle. I took inspiration from my Auntie Jane’s recipe for bounty bars; for this I mixed together the two bags of coconut, some icing sugar about 6 tablespoons), which I sieved (no-one likes lumps – unless you are the Black Eyed Peas – but I don’t think they are the same….) and one of the tins of condensed milk (I added this gradually as I had no idea how much I would need, but handily enough one tin was just right). 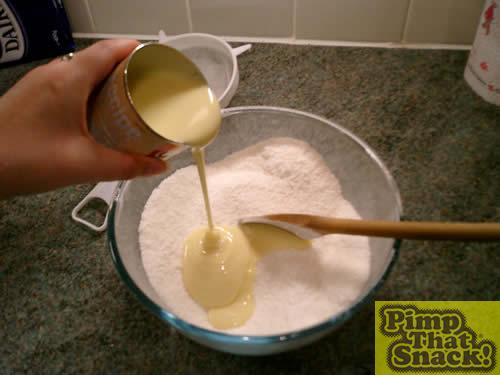 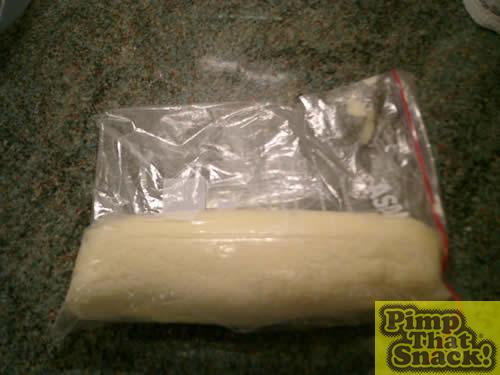 Into a pan go the two lovingly and painstakingly unwrapped bags of toffees (I should say at this point that I was feeling a little done as there was a wrapper without a toffee in the bag – damn thieving so and so Morission’s toffee packers). Perhaps because I’m still peeved at being done out of a toffee, I don’t pay attention at this point and the heat is up too high so I burn a little bit on the bottom, but it recovers well. I am getting worried at this stage though as the toffees were very hard and I’m concerned this won’t make a very tasty layer in my boost, at least not one that you can easily eat. Whilst pondering what to do about it; milk, butter or what, I see the tin of condensed milk that I didn’t use. Perfect. I give this a go.

I’ve decided to go for the Swiss Roll approach to building my Boost, so I pour out the toffee into a square. (At this stage I get the coconut sausage out of the freezer to measure it. I find it is 24cm long with a diameter also of 24cm – couldn’t have done that if I had tried!!) 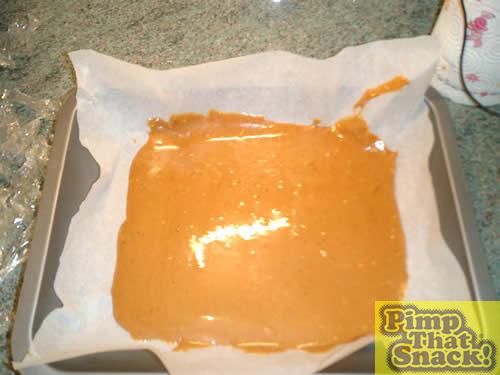 Now the toffee square goes into the freezer till it is the right consistency for wrapping.

While the toffee is setting I melt about a third of the chocolate to make a base using the tried and tested bowl over a pan of hot water method. All goes well and I pour this out into a tinfoil mould (Luckily the tiny bit I had left was just the right size.)

Chocolate now goes into the freezer. I test the toffee and it seems about the right consistency for wrapping. It and the coconut sausage come out of the freezer. 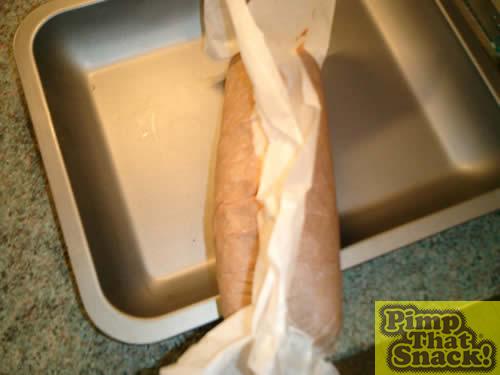 and it goes back in the freezer.

Some time later, I check on everything in the freezer; the chocolate is nice and hard and the coconut and toffee sausage seems right too so out it comes and I start to take the paper off.

Disaster, it might be greaseproof but it certainly isn’t toffee proof; this paper is well and truly stuck. After trying, unsuccessfully, to peel/pick/scrape it off, I decide the only way is to slice it off, along with a slither of my precious toffee. 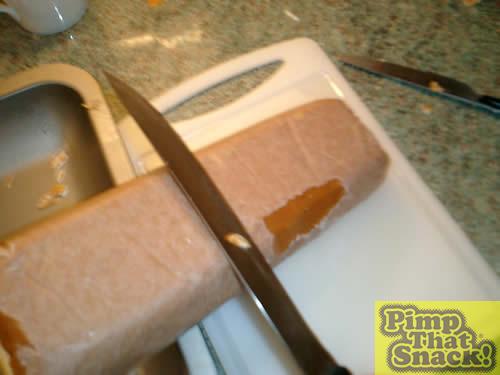 I get there in the end, and I find as the toffee defrosts a little it does peel off a bit. Anyway, while doing this, I realise that the toffee doesn’t meet on the top.

However, with the inspiration from cutting off the paper, I hit on a patchwork idea, so a little bit of cut and paste later, I now have a toffee covered coconut sausage. 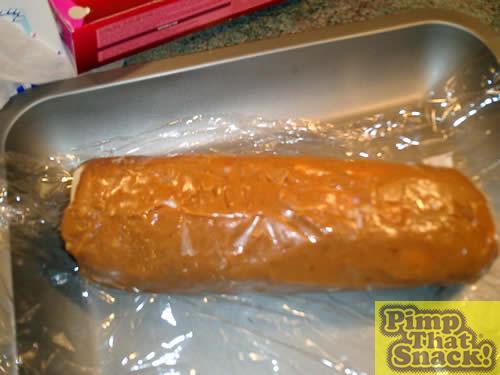 It’s started to melt a bit now, so I put it in the freezer whilst I melt the chocolate for the top. Once the chocolate is ready, I put everything together.

So, after a couple of layers of chocolate later, ensuring I get it to be the all important ‘Slightly Rippled with a Flat Underside’. I end up with this. (Glucose-laden Boost for comparison.) 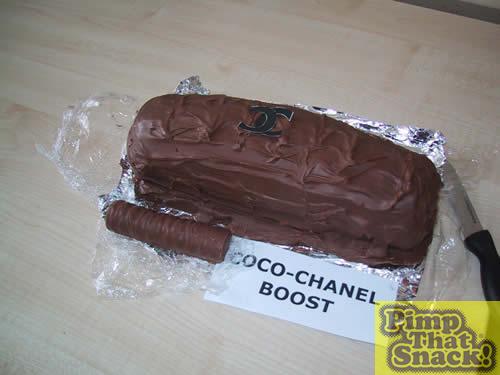 and finally, the obligatory cross-section. 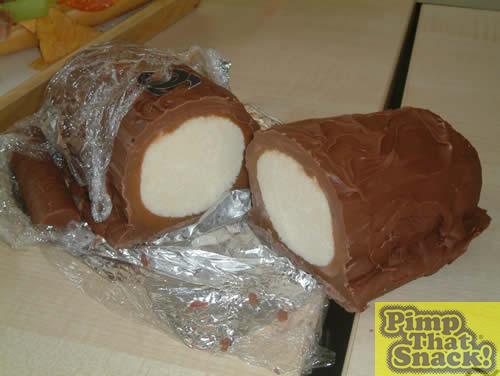 I also have left over, ½ can of condensed milk and about a third of the chocolate – think I might make a toffee and chocolate cheesecake for Sunday lunch. I also didn’t need to icing sugar as I found plenty in the cupboard when I went to put it away. So taking away the stuff I didn’t use/need and the additional items, I reckon the real cost was about £8.50.