I'm yet another one who saw the F-word and fancied a go at this myself!
After consulting some people at work, we decided we wanted to make something challenging for the title of "biggest ever pimp."
At this point I must thank Wayne, who out of nowhere said "wnat about an ice lolly," and that was that.

We narrowed it down to a fruit pastille-lolly, being a nice shape, and easy on the eye.

The ingredients came to around £3.42:

I searched for a suitable container to freeze the whole lolly in, which proved a little ambitious, so in the end I just dusted off the old pressure cooker and decided to do it in 5 bits.

It was easy enough to start with, put the cordial in the pan, dilute it, put it in the freezer.

I had absolutely no idea how long it was gonna take to freeze, but after a day, it seemed like it was going to take forever. Poking it and breaking the ice presumably doesnt help, but curiosity couldn't be helped !!
So, around 64 hours later, the first bit was done. Run the pan under a hot tap for a while, and hey presto... a big block of coloured ice.

So I popped the block in a bin bag, left it in the freezer, and started part 2. As it had taken so long to freeze, I decided to use crushed ice to help it on its way (pushing the cost up another £3).
All the way up until there were 4 blocks of ice, and the 5th freezing. At this point, there was definately not a lot of room for our food. 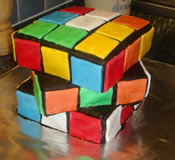