On a recent trip to Switzerland, I noticed that somebody, at some time, had “pimped” the landscape by simple virtue of taking a mind-blowingly huge sandwich box, filling it with rocks and mud and stuff, and then emptying the compressed contents onto the otherwise level ground. The pimpmeister in question decided to call this ambitious project “The Alps”. The man was an inspiration to us all.

It was while pondering the enormity of one man’s work that I realised that I could pay homage to this unsung hero of our time, at the same time as carrying out a fairly ambitious pimp of my own. You see, some thief of intellectual property at a local chocolate factory had brazenly half inched our hero’s work of genius, and scaled it down to the pathetic proportions that we now know as “Toblerone”. In my house this Jezebel is known as “The Anti-Pimp”. I somehow had to undo the injury caused by the factory to inestimable numbers of alp-pimp fans- by resizing the inadequate chocolate alps and returning them to somewhere-near-pimp-scale.

It became clear that such a task could only be undertaken by a crack team of chocolate mountain builders- so I immediately flew home and asked my wife and the drummer from my band to join me. The rest would be history if anyone cared (except Jack Walden- a year 10 pupil of mine that introduced me to pimpthatsnack.com with a knowing look in his eye, as if he knew how much sleep it would ultimately cost me).

So to the big night. It was declared illegal by the chocolate pimp union to force their members to work without adequate alcohol to do the job properly, so as a responsible and caring employer I willingly complied. 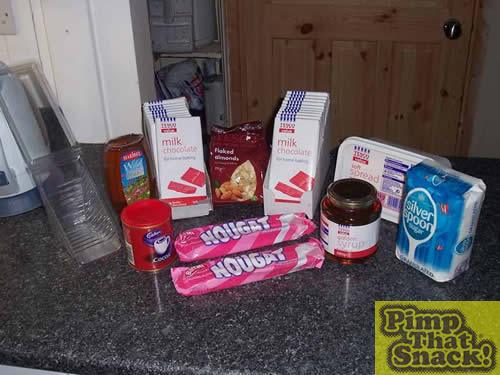 To start off, all ingredients needed finely chopping. Nina and Jen did large knife patrol whilst yours truly started breaking the 30 odd bars of chocolate into a huge bain marie and melting it all down. Despite it being midnight, I reckon half the neighbourhood paused outside our place, high on choco fumes. About half of the melted chocolate was poured into the mixture of almond, nougat ( is that the same as nugget- the stuff we lost teeth to in 1970’s fairgrounds, or is it a much posher thing, like the stuff these Belgian chocolatiers call noo-gaaah), honey and various other yummy things. 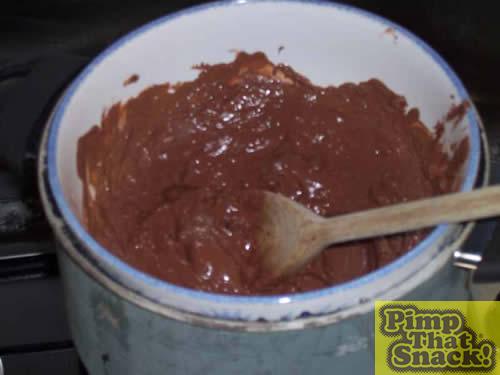 Then the sandwich boxes needed greasing and lining with greaseproof. The warm mix was poured into the sandwich boxes, which had been secured to an oven shelf by their lids using sellotape. The shelves of mini alps were then placed in the fridge for a couple of hours to harden. 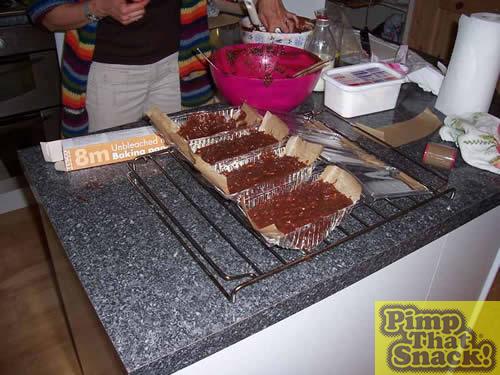 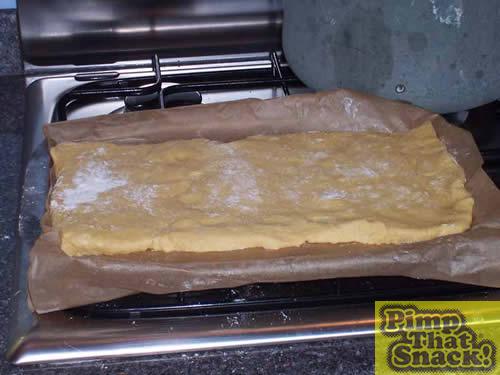 Later- several bottles later- came the big moment of truth. Would our ill calculated alp mixture “go off” as well as the alp-pimp-meister’s obviously did- or would toblerton’s alps resemble oversized Dairylea Triangles in a weird brown colour?? 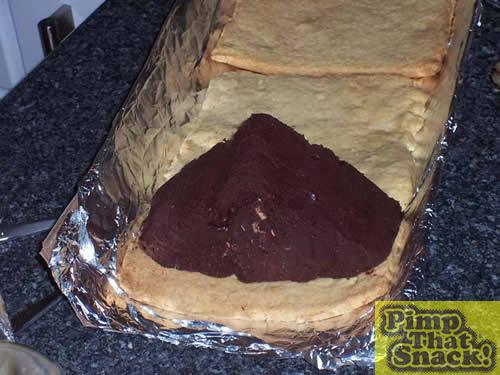 SUCCESS!
We had full alpine stand-to-attention, rock-like mini mountains, and it brought a tear to the eye of more than one hardened pimp, I can tell you…

Now with a base cut from a dvd player box, supported by a hastily baked huge biscuit to lend strength to the base of toblerton itself, we arranged the alps into that tell-tale shape- the little mountains back to back along the length of the foil lined cardboard canyon. 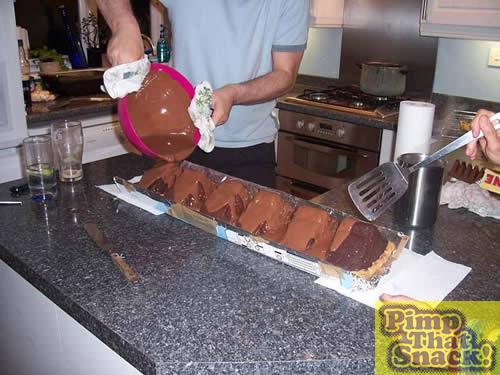 Yet more melted chocolate was poured over the top of the whole thing, to add strength, not to mention that “alpine fresh” lustre, and we were ready for several last drinks before bed. Well, it was half past four in the morning…

On waking the next day, all that was left to do was a quick trim-up of excess chocolate, and Voila- we had reversed the insult that Swiss history had thrown at our inspirational pimp-guru, and I’m sure we’re all better people as a result.
I for one can sleep again. 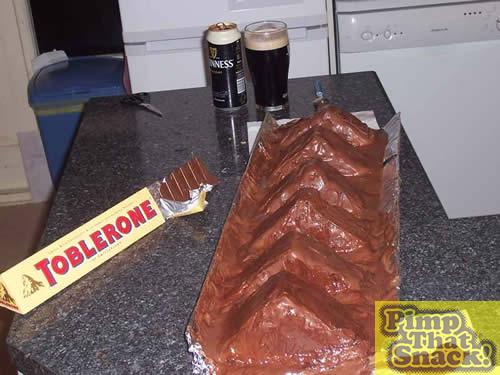 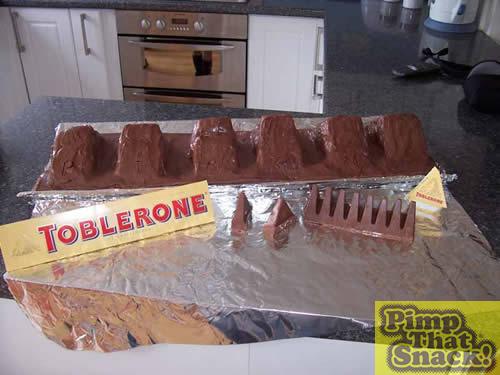