UPDATE 13/04/2006: Son of Jaffzilla has now been created, with an orangey bit that is actually smashing. See the end of this report for more info.

The Giant Jaffa Cake has a long history; McVities once went up against the Taxman to prove that the Jaffa was a cake and not a biscuit, and therefore exempt from luxuries tax. To prove their point, they baked a giant Jaffa, and showed it to the jury, arguing that if this was a cake, why wasn’t a normal sized one?

They won, of course. The outcome of this case costs the UK economy around £34m in taxable revenue per annum, and lingering government resentment has kept the Jaffa Cake off Civil Service biscuit trays ever since.*

* This last sentence is not actually true

Let’s neatly segue from Jaffa Solicitors to Soliciting Jaffas. How do you pimp such an icon? We thought the best way would be to pay tribute to McVities star legal advisors, and try and re-create the Jaffzilla that bulldozed its way through the courts.

The first step was to analyse the key components of a Jaffa. We abducted two innocent cakes, and subjected them to a terrifying process of vivisection. The results can be found below:

Clearly, sponge cake + smashing orangey bit + chocolate = Jaffa Cake. It’s interesting to note that any one of these three components eaten separately are really quite unpleasant, particularly the chocolate; the genius is in the mix. 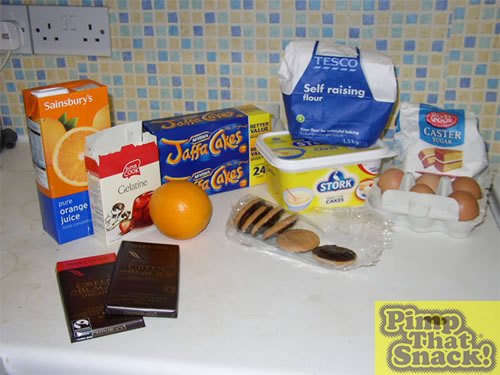 The ingredients assembled, and a good nine or ten Jaffa Cakes consumed in the name of science, we set to work.

For the smashing orangey bit, we’re mixing orange zest, freshly squeezed orange juice and the terrifying horror that is gelatine. Sadly, this is not vegetarian friendly; it’s made of rendered cow hooves, or elephant toes, or something. It certainly smells like it’s made of feet. Into the fridge it goes. 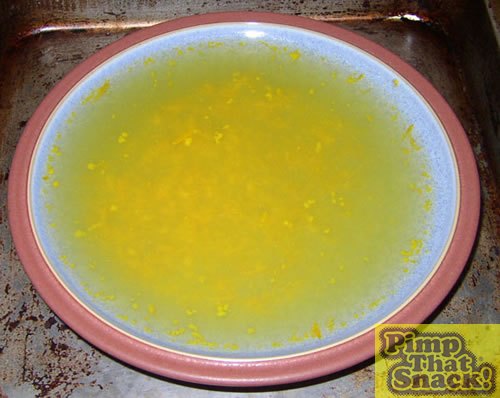 Next up, the sponge:

In the meantime, back to the Disturbing Orangey Bit. It’s set beautifully, but we now have the problem of getting it out of the dish; turning it upside down and banging the plate has no effect. We decide to mull it over while having a brew. 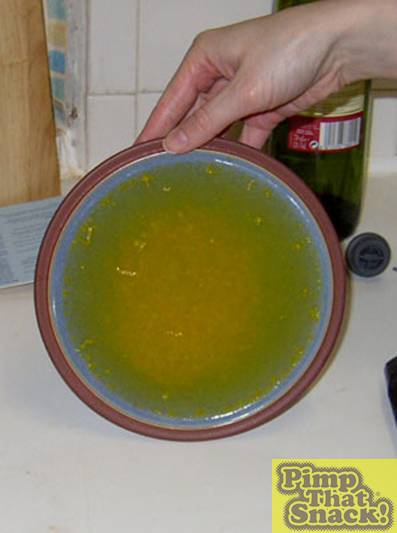 One cup of tea later, we impetuously shove it in the microwave for ten seconds on 800W. Disaster; jelly goes back in fridge, upside down. Chefs seek therapy.

Thirty minutes later, with the aid of grease proof paper and a fish slice, our jelly has been coaxed out of the dish onto the now finished Victoria Sponge. 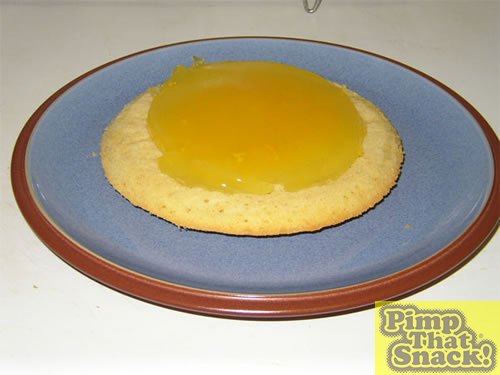 Next step is to melt the chocolate, in the traditional way. For reference, we’re using a pyrex bowl in a metal pan with boiling water from the kettle, and no additional heat.

Making sure that the chocolate isn’t so hot it’ll liquefy the Disturbing Orangey Bit, we pour it on. A bit of deft spoonwork ensures that we have the classic Jaffa pattern. Into the fridge for 30 minutes.

It lives! Visually, it’s a corker – the gentle curve of the sponge base, the colour of the chocolate, the Ayer’s Rock-esque rise in the middle for the Smashing/Disturbing Orangey Bit. It’s also rather large.

Pimptastic! It’s not actually as garguantuan as first appearances suggest – those are mostly Jaffa Cake minis, with one regular Jaffa cake to be found on the left. For a more accurate comparison, here’s the cross-sections: 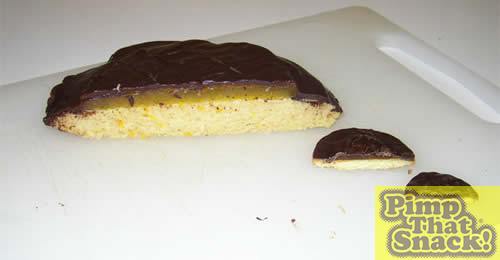 For the record, the end product is revolting. While the cake and chocolate are A1 Tip Top, the Disturbing Orangey Bit has no sugar in it whatsoever, and tastes like calves feet dipped in marmalade.

Obviously, the above is a magnificent beast brought down by one fatal
flaw – the Disturbing Orangey Hoofy Bit. Our Pimp Food Scientists
couldn’t stand to let this ruin the fun, so we created a new
Jaffzilla with an all-new Orangey Bit. Is it smashing? Not half. 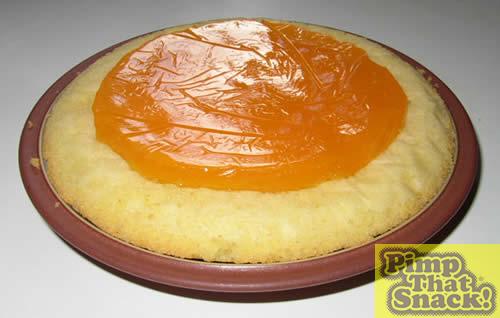 As you might have guessed from the photo, we’ve used off-the-shelf
Hartleys Orange Jelly for this, with a dab of fresh orange juice for
fly pimp points. Use half the amount of water recommended for a nice
solid orangey bit. The key differences between this and our previous
effort are firstly the presence of a lot of sugar in the jelly, and
secondly not having to smell the awful, awful stench of unflavoured
gelatine during the make. 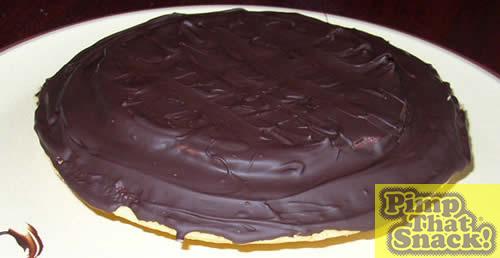 Son of Jaffzilla was offered as a sacrifice to a group
of Civil Servants, to make up for their historical Jaffa defecit.
They wolfed it in ten minutes. Success!