Friday Afternoon. No exams for over a week. Hyped up on copious amounts of Pepsi. Naturally the only choice was a pimp, and given a distinct lack of culinary expertise, and a not-very-extensive brainstorming stage, we settled on the first thing that came to mind; a giant custard tart.

The simple answer would have been to simply find readymade pastry and some custard mix, but that would have been too simple, and we were looking for something to waste our time here. Our previous experience in the kitchen limited to production of burnt scones in Food Tech lessons at school, coupled with a blind belief that the internet provides solutions to all problems, we headed to Google and Wikipedia and hit the all purposes button labelled ‘I’m Feeling Lucky’. Armed with a recipe and an ingredients list, we proceeded to Tesco! 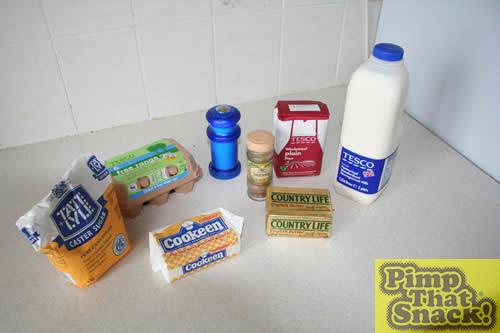 Our next main challenge was to find a suitable dish in which to make this beast. After a brief contemplation as to the flash point of cardboard, and whether a mould as such would spontaneously combust in the heat of the oven, a casserole dish, not normally suited to desserts, was settled upon as having a suitable depth for this mammoth tart.

First step, making the pastry. Nice and simple enough, just mixing of flour, butter and lard. Well, sort of simple, being the cheapskates we are we immediately bought the flour with the lowest price tag, which happened to be whole meal. Just gives the final tart a more distinctive colour I suppose… 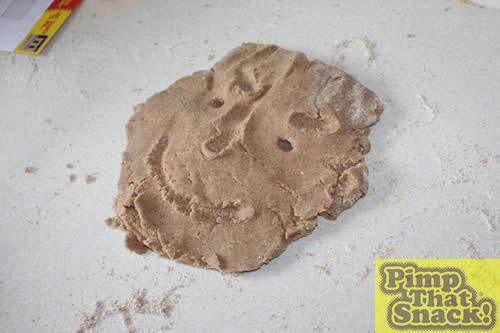 With the pastry waiting in the fridge, the next step was to the custard. Again not too tough, merely eggs + sugar + milk = custard. Except that the milk needed to be heated, and us + fire ? success. Cue milk boiling over and one of our number only narrowly avoiding third degree burns. 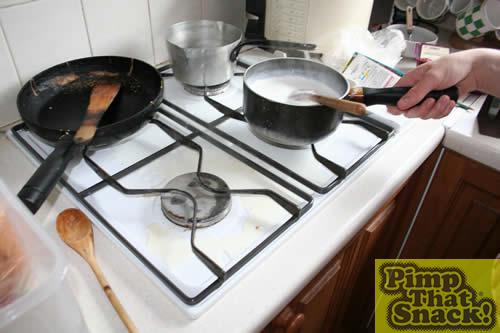 It occurred to us that it just wasn’t custard without some vanilla, resulting in some cupboard raiding which also turned up some egg-yellow food colouring. Adding a splash of each (well, slightly more than a splash, we haven’t got terribly steady hands) to the custard, it turned the distinct custard yellow we were aiming for, and smelled, well, rather like the distinct custard we were aiming for.

Technically the pastry was supposed to be left in the fridge for two hours, but impatience took over, and after twenty minutes or so it was removed, and used to line the dish with a nice thick layer, so as to decrease the chances of the tart falling apart when eventually removed. Being the artistic types, it was finished off with some nice diagonal knife indents around the edge to truGly give it the feel of a proper custard tart. 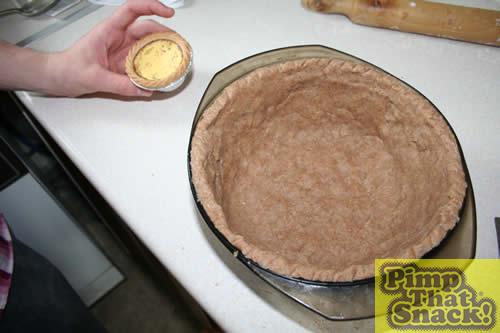 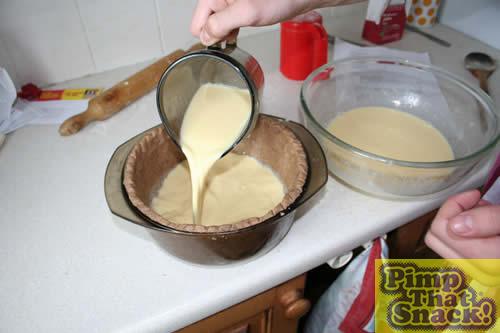 Second Crisis! Decided to take the pie out of the oven to test the custard .but due to some slight handling discrepancies (READ: Almost dropping it.), a significant portion of our custard departed the dish to its new home on the floor. Was this the end of the tart?

Back in the oven, and out again a short while later. The custard had literally risen to the challenge, and expanded to fill up the tart case. Looking rather nasty, with a large brown blob on one side of the skin, we removed this top layer to reveal some rather nice looking custard underneath. Some nutmeg sprinkled on top, and then in the fridge for the custard to set, and a wait until the next day.

The next day, the monster was ready to be removed from the dish. By a rather ingenious method involving two knives, three plates and an elastic band, the task was accomplished. 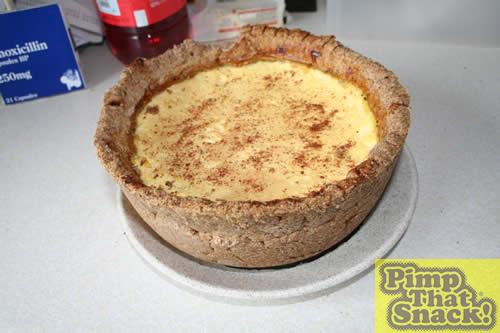 The final task, the taking of weights and measurements, and a comparison with the original. 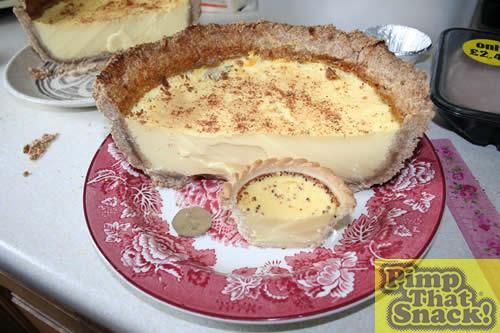 The most pimped custard tart to grace the planet. 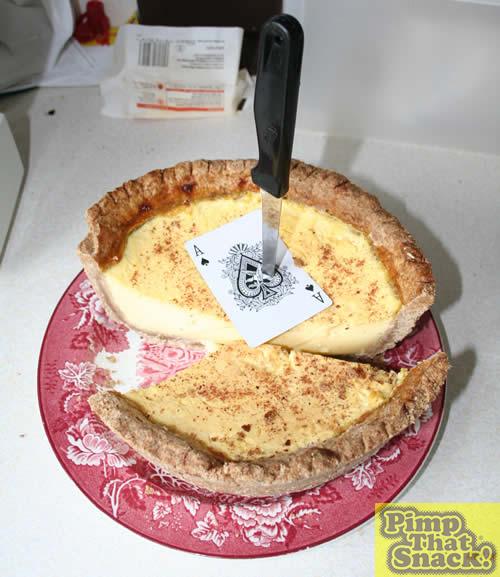